The Avon Walk has been POSTPONED until further notice due to the typhoon.
by Sharline Bareng | Oct 3, 2009
Post a Comment 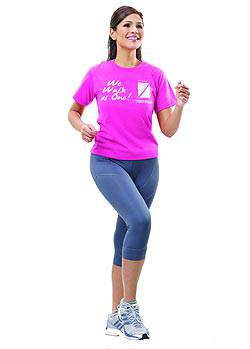 Breast cancer may sound too daunting to defeat, but becoming part of 50,000 crusaders against the disease could go a long way.

You could help provide the cure for breast cancer patients by walking with thousands in "We Walk As One--Avon Walk Around The World For Breast Cancer 2009." It has been POSTPONED, however, until further notice due to the threat of typhoon Pepeng. It was planned to be held in seven key cities of the Philippines. The event was launched last September 3 at Manila Peninsula in an event hosted by GMA-7's Lyn Ching and attended by heads of institutions that champion the cause as well as breast cancer survivors. GMA talent Jan Nieto sang the campaign's theme song, too.

According to Avon President and General Manager Bob Briddon, they hope to gather 50,000 men, women, and children to participate in this year's fundraising activity, from last year's record-breaking 40,000 walkers in 16 locations. The Walk would be led by Avon officials, TV personalities, and Kiss Goodbye to Breast Cancer (KGBC) ambassador Iza Calzado.

Cosmo chicks can join the simultaneous walks in SM Mall Of Asia in Manila, Bulacan Provincial Capitol in Malolos, Plaza Burgos in Vigan, SM Iloilo, and Avon centers in Cagayan de Oro, Cebu, and Legaspi City. You only need to buy the Limited Edition KGBC shirt (P149) to participate in the walk. For every purchase, P20 goes to PGH Breast Care Center, which provides treatment and chemotherapy to breast cancer patients.

You can also donate to the cause by buying the Avon Water Lily and Aloe Hand and Body Lotion (P109), available for the whole month of October.
Continue reading below ↓
Recommended Videos
Read more stories about