Our blogger Sheng shares with us her 2010 plans and a lot of the crazy stuff she dreamed of doing as a kid--which she was eventually able to achieve.
by Angela Vera | Jan 1, 2010
Post a Comment

Our art director told me some time ago that, before he started working, he wrote down all the things he wants to accomplish in life, and made a timeline that specified the target completion periods of each item. He'd recently taken a look at the list again, he said, and was pleased to discover he was still on track.

I realized then that I have made a similar list before--albeit of a much more frivolous nature, as it was for a project I did in high school. Some of the crazier stuff I noted down are as follows:

[readmore]
Then again, there were some things I included just for the heck of it, but ended up seeing fulfillment:

With 2009 giving way to 2010 without even the slightest pause, I figured I'd better have a game plan ready if I want this year to be more eventful than the last. What I came up with was a list of goals rather than resolutions, some of which where already in my original list circa 2002. 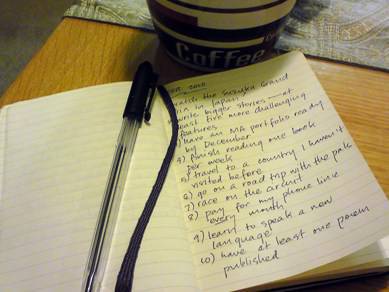 I'm now under a lot of pressure to accomplish all these things, having published it for the world to see.

For those who can't understand the messy scrawl I pass off as handwriting, here's the list:

Ten items to tick off within twelve months might not sound like much, but each thing I've listed here won't happen by itself. My 2010 list might even prove to be crazier than my 2002 one. In the past eight years, though, I've hopefully learned a few new tricks to make it all happen. For the most part, this year will be harder than the one before. Still, I'll be all the better for it.

Here's to a brand-new year. The next twelve months are all for the taking. I hope 2010 works out for all of you.