WATCH OUR VIDEO SERIES!
© 2022 Cosmopolitan Philippines
Sorry, no results were found for
Travel

Surf with Luke Landrigan at the Billabong All-Girls Surf Camp!

Already in its second year, the 3-day Billabong Surf Camp (March 15-17, 2013) aims to teach girls how to safely explore the waves and beaches of San Juan, La Union. Spearheading the camp is Billabong Asia athlete and professional surfer, Luke Landrigan, whose accolades include emerging as the Champion of the Aurora Surf Cup Challenge 2009 in Baler; the Nike 6.0 and Global Surf Industries Longboard Pro Invitationals in La Union; and most recently, first-runner up in the Longboard Division of the 6-star dual-sanctioned Quiksilver Open West Java 2012 in Indonesia.

Billabong is a strong believer that Life Is Better In Boardshorts—or in this case, bikinis—and with this is a strong advocate in growing and supporting the surf scene. Fusing form and function in its slew of products, which includes not just a strong series of signature and technologically-advanced boardshorts and bikinis, but fashion tops, bottoms, and accessories as well, Billabong has been the go-to brand for beach lovers and surf enthusiasts all over the world. 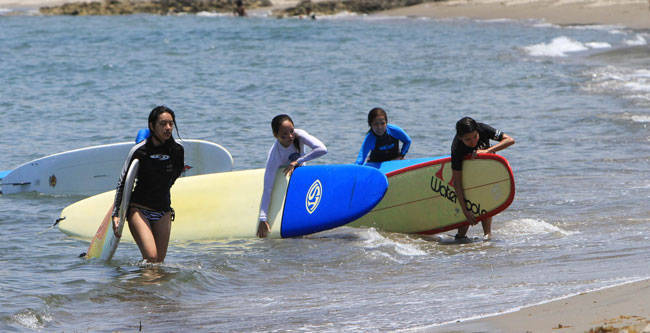 In addition to getting schooled in the art of surf, participants will also be able to jam with the highly affable DJs Joey Santos and Niki Rojas, whose BPMs have helped shape the local party scene and music festivals—most notably the Aloha Boardsports Surf & Music Festival, the Manila Music Festival, and the Tagaytay Electronica Festival.

Sign up for the Billabong All Girls Camp at www.alohaboardsports.com, email billabongsurfcampgirls@gmail.com, or call (+63)917 928-4583 for more information.