9 Things Only Terrible People Do On Airplanes 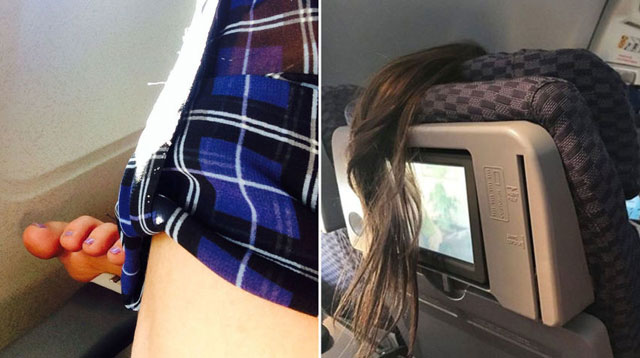 After plenty of flights, my fear of flying has pretty much disappeared. I still hate it, but I don't cry when the plane takes off and I don't cling to my armrest during turbulence like I used to. Instead, I channel my emotions into hating literally every single human being on the plane.

Airplanes are a great place to find the worst in people. It all starts at the gate. You've got a bunch of people standing around, waiting to charge onto the plane even though they call people to board in specific groups. Why do we all do this?

Once on the plane, it's a total free for all of cringe-inducing behaviors. Please never do these:

On my last flight, I was typing on my computer and the woman next to me peeked over my shoulder and asked what I was working on. Really? Are you serious? I thought it was clear I was in prime don't-talk-to-me mode. I even had my headphones on. I wasn't smiling. I was busy. But somehow, I still seemed approachable? She was actually very nice and we chatted for maybe an hour where I learned about her life, career, kids, and whatever else. She even offered to buy me a wine (I said no—I still regret this). Neither of us knew how to end the conversation though. We couldn't say we had to go anywhere. We couldn't walk away. It was just OK, we're done talking, I'm going to turn away from you now and pretend this never happened. Awkward.

2. Push seats as far back as they can go while just straight-up rocking the seat.

Hi, sir, do you hear me? I'm behind you and you're really killing my airplane vibe. My tray table is about an inch from my stomach and you're rocking it all over the place. How would you feel if someone did this to you? Not good? Yeah, so maybe don't do it to me, thanks.

3. Let children play games or watch movies WITH THE SOUND ON.

Recently, I was on a flight where a child was watching a portable DVD player. It was literally so loud that I could hear every single line, word for word. It was awful. I cried. Have you ever heard of headphones?

Other than the leftover anxiety from my fear of flying, I also get anxiety before boarding that there will be no room for my carry-on. This is because people suck and fill all the bins up (even with tiny bags), forcing other people to check their bags, or run up and down the airplane looking for a spot.

5. Keep getting up to use the bathroom when sitting in a window seat.

My biggest accomplishment in life is that I have never peed on an airplane. I've been on many 6-plus hour flights and have held it in the entire time. This is not only because I fear airplane bathrooms, but also because I usually snag the window seat and I don't want to make poor, innocent souls stand up to let me in and out of my seat because I am a nice human being. You can pick out what seat you get when booking flights, so why do people who know they have a bladder problem choose to sit in the window seat?

6. Turn on the fan or light during a night flight when people are napping.

7. Bring and eat smelly food onboard.

Tuna. Or any seafood. Onions. Peppers. Subway sandwiches. Really anything at all that has a stench. Not everyone is going to like what you're eating and you're going to gross them out. And when all of these foods mix together—ugh, help.

8. Bring crying babies along for the ride.

I know, I know. You can't help this. And one day when I have babies and they have to fly with me somewhere, I won't be able to help it either. But it can still annoy me, right? Am I a bad person for saying this? Because you know deep down inside it will always annoy you too—unless it is your own kid. #Fact.

Well, this is something we all can't help either, but that doesn't make it less disgusting. Farts that smell stink up the whole airplane and it is not OK. Don't be that person (or at least don't eat gross food before flying).