4 Things That Would Make Him Introduce You to His Family

Meeting your man's family is always a big deal. Here's why he'd be inclined to make introductions.
by Kat Alano | Jan 15, 2013
Post a Comment 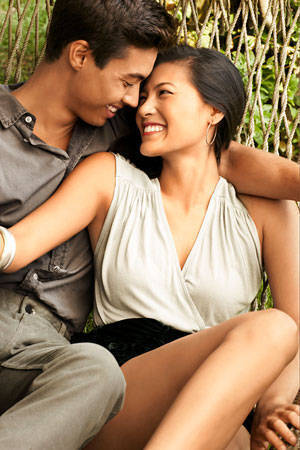 You’ve been dating for a while, with a few ups and downs, and it’s beginning to dawn on you both that this could be for the long haul. One of the great indicators that there’s something more than casual cavorting is the meet-the-parents moment, since family is always a big deal here. This momentuous occasion could be something you’ve talked about, or he could even spring it on you when you least expect it.

Here are some highly likely reasons why the guy you’re with will suddenly want you present at reunions and intimate weekend gatherings.

1. They’re wildly curious about you.

An introduction to his family may come in a more casual form, because it’s meant to satisfy their curiosity about you. Most families have their rituals, and getting an invite to one of these definitely indicates a level of acceptance and a desire to get to know the apple of their son’s eye. The fact that they know you exist (and are a big part of your guy’s life) means he’s been talking about you—and in a very favorable light. Also, joining in on a regular occurrence instead of having a meeting set up especially for you takes some of the pressure off and gives you enough breathing room to be yourself. If you’ve been dating a while and this has yet to happen, then hold off on daydreaming about wedding dresses and making long-term plans.

It’s easy for men to go on autopilot, especially in the context of a long-term relationship. Some men are happy just to go on dating forever, with neither matrimony nor major changes on the horizon. If this is fine with you too, then carry on. At some point, however, you may feel like initiating the next-level stuff. If he’s not ready—or at least feels like he’s not ready— you could look into the reasons why together. But sometimes, it’s good to take charge, especially when things wouldn’t advance otherwise. If it’s important for you to nudge the relationship forward, you should inform your man, preferably in simple, straightforward terms (“I’d like to meet your family.”) and he should proceed accordingly.

A man who has just purchased a really hot ride will be unable to resist parading his new car in front of people to indicate his status/wealth/taste. Some men cannot wait to let everyone (especially the parents who thought he would never amount to much of anything) know that they are involved with an architect/ doctor/supermodel with a Nobel Prize. Now, of course, you are more than the sum of your achievements. Also, you are not a luxury car. And being shown off means that…well, he is a bit of a show-off, and that a sort of trophy wifehood might be a dark possible future. It's nice to be appreciated, however. Best case scenario, his genuine pride in your triumphs springs from a genuine love for you as a whole.

Well, this is the big one. Whether he envisions a wedding in five years or by next week, your man is deep into the relationship. Of course, there are degrees; he may be in the throes of the initial thrill, when nothing can go wrong and everything seems to be hearts and flowers and bedroom romping. Or, this decision may come after a year or more of going out and a slow (perhaps overdue) sense of “Hey, this is serious.” In any case, this could be it, he could be The One. By introducing you to the parents, he shows his conviction about the future, which can act as an invisible armor against his folks' possible doubts or disapproval. Now, the question is whether you’re ready for the possibility of becoming his wife, not to mention his parents’ future daughter-in-law.