'We ended up hanging out; she made for a good buddy. Before I realized it, we were in love.'
by Cheekie Albay | Jun 5, 2017
Post a Comment
Featured

One moment you’re sniggering beside each other in class, and the next, you’re staring into each other’s eyes at the altar. For some couples, this jump from platonic to romantic takes months of harmless palling around before they catch that sickness called feelings; for others, it takes decades and a bunch of relationships on either side before a light bulb goes off in their heads and they realize that this is—OMG—“The One.”

We got nine men and women to reveal their (and their parents’!) friends-turned-lovers tales. Swoon at their stories, and don’t write off that next-door neighbor you used to play patintero with just yet. He might just turn out to be—OMG—“The One.” 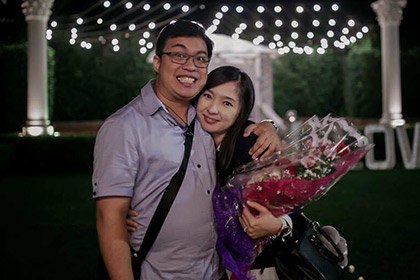 “AJ and I became best friends in high school. We were like the characters in Love, Rosie: There was attraction, but we kept brushing it off.

After I rejected AJ, we didn’t talk or see each other for a few months, and that’s when I realized that I couldn’t live without him in my life. When a common friend invited us both to meet up without knowing that we weren’t on speaking terms, I texted AJ asking him if we could pretend like nothing happened. That’s when he told me that he wanted things to be how they used to be, and that he would settle for having me in his life as a best friend over not having me in his life at all.

We patched things up and, finally knowing that AJ was the right one for me, I broke up with my ex. After dating for less than a year, AJ proposed to me in Tagaytay. I said yes.”

“We ended up hanging out; she made for a good buddy. Before I realized it, we were in love.” –Adrian 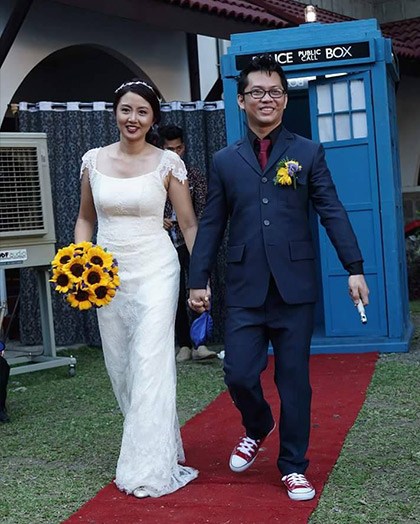 “We met through the local Star Wars fan club here in the country. We were avid fans of the franchise and were both into cosplaying. I was with someone else at the time; meanwhile, my friend was avidly courting her.

Later, my relationship hit the rocks, and the courtship turned real sour on her end. We ended up hanging out; she made for a good buddy. Before I realized it, we were in love. We got together at her village park, sealed it with a kiss. We felt invincible after that.

We got married last year—a little more than 10 years to that day at her village park—with our wedding reception theme another geeky one: Doctor Who. Yes, with a life-sized Police Box. And we’re still geeking out over our favorite comics and TV shows, our house being a veritable junk yard of geekery.”

“Like a scene in a movie, he ran as soon as he saw me and gave me the warmest welcome-back hug.” –Kara 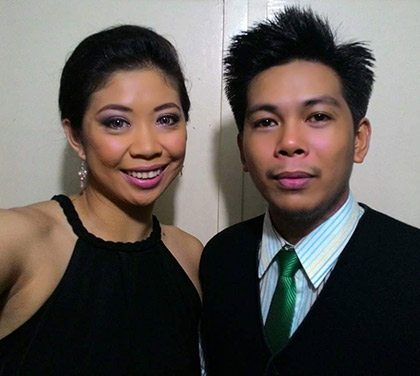 “Both of us used to frequent this underground bar in Davao City where his band used to play. However, he was always away in Siargao after having falling in love with the island years prior, so we weren’t that close.

He’s a tattooist, so one time, I talked to him about getting a tattoo. It was the first time we got to converse without our common friends around, and that’s when we realized we were on the same wavelength. The chemistry was undeniable, but as I was in a long-distance relationship then and he was still dealing with drama from his ex, we remained best friends for a year.

Eventually, I had to leave Davao and we got separated, although we kept in touch. By the time I returned to Davao, we were both single, and he came looking for me. Like a scene in a movie, he ran as soon as he saw me and gave me the warmest welcome-back hug—and that was it for us.

We’ve been together six years now, and living on the island he had fallen in love with.” 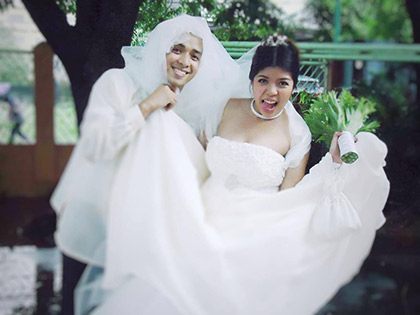 “I met John in college when we ended up sitting beside each other in class. I had a boyfriend then who was jealous of the platonic friendship I had with John. I brushed his jealousy off; I thought he was just being paranoid.

Years later, John and I met again at a reunion. He was surprised when he found out that I was finally single. That same night, before going to bed, I received a message from him saying, ‘Ingat ka tomorrow. Magmamahalan pa tayo!’

The next day, John asked me out on a friendly date. On that date, he confessed that he had always liked me back in college, and that he had always jumped at the chance to chat with me whenever my boyfriend was away, although he kept his distance to be respectful.

We got married in 2011 and we’re now proud parents to an amazing five-year-old boy. To this day, I can’t believe I married my seatmate, who unbeknownst to me, already had a thing for me since day 1!”

“We began to feel a burning flame getting bigger day by day. We jokingly bet who between us would fall in love first.” –Tanguy 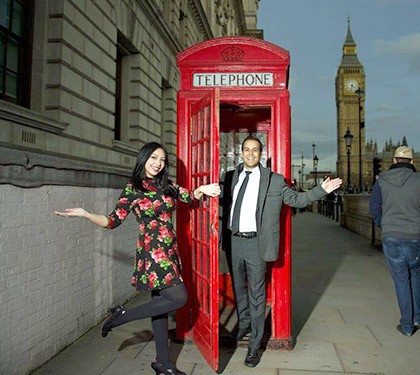 “Happy and I first met in 2012 through a common friend, but sparks didn’t fly. She thought that, me being an hotelier, I was the serious type, and as she was a fashion designer, I thought that she was from a world I could never access.

In 2016, I asked if she would lend some of her creations for an event at Sofitel where I work. When I was about to pick up the clothes from her, something came up and it didn’t happen, so we missed that chance to connect again.

A few months later, Happy came to one of our events at Sofitel. I had to make a speech, so I returned the glass of wine I was holding to keep my mind sharp. Happy, who was with her mom then, approached and asked, ‘Why did you return your drink?’ She then introduced me to her mother as the guy who ‘never picked up the clothes.’ Embarrassed, I answered, ‘I think I need a drink now.’ That’s how we finally began to get to know each other.

We were just friends at first, but we began to feel a burning flame getting bigger day by day. We jokingly bet who between us would fall in love first. Eventually, we realized that we were each other's soulmate.

Happy and I are engaged now, super duper in love, and getting married in November!”

“I’d get jealous whenever he’d speak with my close girlfriend. Little did I know that he had told that same friend about his feelings for me.” –Michelle 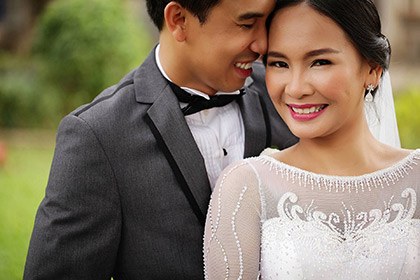 “My now-husband and I were classmates in high school before we became best friends. We liked other people then, and he’d even let me read his love letters to other girls so I could tell him if what he wrote was okay.

Since we were together every day, things began to change between us. He would often come to my house after school, and we began to exchange letters to talk about anything under the sun. Months later, we realized we had fallen in love, although we had yet to admit it to each other. I’d get jealous whenever he’d speak with my close girlfriend because I felt like he only saw me as his best friend. Little did I know that he had told that same friend about his feelings for me.

On Christmas that year, he went to our house to finally talk about the feelings brewing between us. We became a couple just before our high school graduation.

We then went off to different colleges, broke up, got back together a year later, survived a long-distance relationship for two years, and got engaged when I returned to Manila. Now, we are married with one beautiful daughter.” 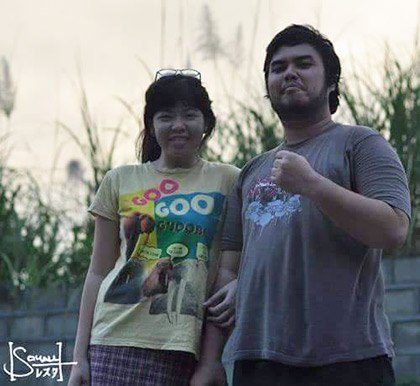 “While we went to different universities, Paul and I used to keep bumping into each other back in college because we moved in the same social circles and joined the same inter-school activities. After graduating, we ended up working for NGOs with offices near each other, so we hung out a lot together with my co-workers whom he also knew.

One day, a mutual friend showed me her Facebook chat with Paul. Paul had been asking her to help him make me realize that he had been making a move on me for weeks! He even asked her if he should buy me flowers so I’d finally get the idea. I had been pretty clueless that whole time because I had a lot of guy friends, and to me, Paul was just one of them.

I messaged Paul on Facebook, told him that I had read his messages, and told him that I liked him, too. I told him not to waste money on flowers and just buy me Royal Tru-Orange and banana cue instead.

By midnight that day, he was my boyfriend. We got married five years later.”

“We didn’t realize that our deep friendship had turned into love until 2010 when a day didn’t feel complete without a message to or from each other.” –Cathy, 33 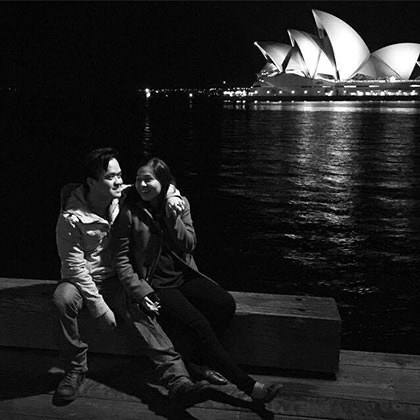 “My husband and I first met as five-year-olds in 1989. Looking back, it seems that from the very beginning our friendship was bound to turn into love--we were classmates from kindergarten all the way to high school. In sixth grade, we even developed a crush on each other; we would speak on the phone for hours...but never in person. When we reached high school, we decided to just be friends, and the puppy love we once had grew into a constant and solid friendship.

In adulthood, we got into other relationships but remained best friends. Even when we were both living in different cities or countries, we made sure that we somehow stayed in each other’s lives.

We didn’t realize that our deep friendship had turned into love until 2010 when technology failed us—i.e. the absence of an Internet connection while I was on a trip abroad—and a day didn’t feel complete without a message to or from each other. After over two decades of friendship, in December 2010, we officially became a couple.

“Right then and there, they found a calendar, chose the date, and got married when the day came.” –Red 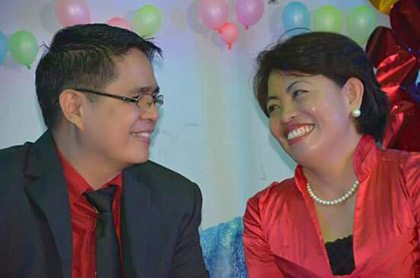 “My parents have been friends since they were teenagers. They remained friends even when they were in other relationships, and grew to become best friends over time.

One night when they had both been single for two years, they were sitting in front of the house where my mom was staying. My dad suddenly dropped the bomb and asked for my mom's hand in marriage. Mom was shocked, but she had no reason to say no. They knew each other inside out by then, and they never felt like they had to put their best foot forward. She knew that he was The One, so she said yes. Right then and there, they found a calendar, chose the date, and got married when the day came.

My parents have been happily married for 21 years. While they’re lovers, they’ve remained best friends, too. When I was born, it was like being welcomed into a barkada.”