Dating Convo: VOLLEYBALL Trivia You Can Exchange With Your Guy

Crushing on a cutie who's into this popular sport? Get to know the game so you can get to know him as you engage in sporty convo.
by FinancesOnline.com | Jul 9, 2011
Post a Comment
Featured 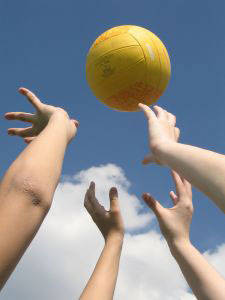 UAAP Season 74 officially begins today, and given all the hype, sports is (and always will be) a great convo starter with any dude. That's why we're bringing you four easy-read primers on some of the most popular sports--so even if you're not a super fan, you can follow a game and a conversation about it.

Check out Basketball 101 before you watch the UAAP men's basketball games, and stay tuned for our primer on swimming (out tomorrow) and football (on Monday). In the meantime, here's what you need to know about volleyball.

Players. There are two teams of six players, each team divided into two: the front and back row. The front row has two wing spikers and a center. They're the scorers of the team and main blockers. The back row has the receivers and passers.

Points. It's a point-system game played in a "best of three format" (whoever wins two out of three sets). In the first two sets, you win if you reach 25 points. If it's a tie, the third set is played, and it's won by reaching 15 points. A team can only win with at least a two-point lead.

A team is allowed only three touches to return the ball to the opposing team's side. The team that scores a point gets to serve. Every time a change of serve occurs, all players rotate clockwise.

If you were on a team, this is how you'd score:

Why has the game stopped? It's probably a case of:

The Shakey's V-League is now a staple tournament in the country. It features top collegiate women's teams going up against each other. Now on its eighth season, it's a venue for great competitions, since teams from both the UAAP and the NCAA face each other.

Watch for these Universities in the UAAP:

The Far Eastern University Tamaraws/Lady Tamaraws have an excellent volleyball program. They are constantly at the top of the league for both the men and women's division.

The University of Santo Tomas Tigers/Tigresses follow closely behind FEU as a dominant team in the UAAP. The men's team is the defending champion, and they're now going for a fifth consecutive championship.

The De La Salle University Lady Archers have constantly improved (through V-League), and now challenge UST and FEU at the top. They are the current women's champion in the UAAP.