Dating Smarts: Sports Trivia You Must Know When He's A SWIMMING Fan

Stock up on swimming know-how and show it off when talking sports or cheering for your college team with your guy.
by FinancesOnline.com | Jul 10, 2011
Post a Comment
Featured 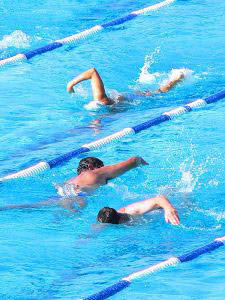 When you're not really into sports that involve handling different types of balls, how can you engage your guy in a competitive activity? Swimming is one way. Not only can you swim together and race each other for fun, you can also watch competitions together.

After giving you a crash course in basketball and volleyball, we give you our primer on swimming, to better arm you when having a sports convo with your guy. Whether or not your dude's a swimmer (like the first of our July Cosmo Online Hunks, Mike Advincula, a swoon-worthy member and former captain of De La Salle University's swim team), you can now keep afloat in a conversation when watching a swimming competition, be it on the UAAP or the Olympics (next year).

The object of the competition is always the same: to complete the course with the fastest time.

Famous people you should know:

Michael Phelps. He's been voted World Swimmer of the Year four times and is often called "the greatest current swimmer of all time." He has set world records and is the youngest male to ever have set a swimming record.

Eric Buhain. The current chairman of the Philippines' Games and Amusement Board, he gained popularity as a champion swimmer. He began swimming because his doctor said it would improve his lungs.

Watch for these universities in the UAAP:

University of the Philippines. Their swimmers have been a constant force to reckon with in the UAAP. They are the defending champions in both the men's and women's competitions.

University of Santo Tomas. They're a historically good swim team and have the most championships in both divisions in UAAP history.


Make sure you check out our primer on the sport that the Azkals made popular in the country, football, out tomorrow!