Dating Tip: Familiarize Yourself With His Fave Sport, FOOTBALL

If you're an Azkals fan girl--or your guy's into the game--here's what you need to know to talk football with him. He'll get a kick out of it!
by FinancesOnline.com | Jul 11, 2011
Post a Comment
Featured 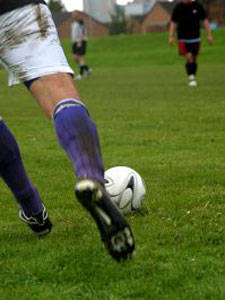 Thanks to the unprecedented wins of our national football team, the Philippine Azkals (that pack of hunky players--including the Fil-Brit Younghusband brothers--that you girls love to watch), football has gained nationwide popularity overnight. But, you have to admit, unless you know what's happening on the field, a game of football is nothing but over 90 minutes of confusion.

So read on for the basics of the game, terms you'll hear him use, and some current events in football. That way, you know when to cheer for your college team at a live UAAP game, for the Azkals on their next game, or for his favorite international team when you join him in front of the TV.

Time. They play a running time (meaning the clock doesn't stop unless a goal is made) of 90 minutes, split into 45-minute halves. There are no timeouts.

Players. Each team has ten players and a goalkeeper on the field. There are three kinds of players: forwards, midfielders, and defenders.

Points. In the game, one goal is one point. And usually, a competition's scoring system is: a win gets three points, a draw gets one point, and a loss gets zero.

Why did the game stop? It's probably because of a:

The Philippine Azkals (and your favorite Younghusband brothers!) just won last July 3 over Sri Lanka to advance to their next opponent in the 2014 World Cup Asian Qualifiers. That's Philippine football history right there!

Famous players you should know (aside from Phil and James Younghusband):

David Beckham is probably known to you as Posh Spice's incredibly sexy husband, but in the world of football, he's a midfielder famous for his precise passing while playing for Manchester United. He transferred to Spain's Real Madrid.

Christiano Ronaldo is captain of Portugal's National team. He gained popularity in Manchester United's midfield after they lost David Beckham. You'll love him for his chiseled abs.

Lionel Messi plays for FC Barcelona, Real Madrid's fiercest rival. He's considered one of the best football players, was nominated FIFA World Player of the Year and European Football player at the age of 21, and won those awards in 2009 and 2010.

Watch for these college football teams:

San Beda College's football program is one of the best in the country, and they've dominated the NCAA Seniors' Football competitions for several years now.

The University of the Philippines is the defending champion in the UAAP, topping six out of eight teams for football in the UAAP.

Far Eastern University is a perennial contender. They've battled it out with UP for the past four years, alternating with them as champions.

If you haven't already, check out our primers on basketball, volleyball, and swimming, so you can discuss these sports with him as well.