29 Lessons Barack And Michelle Obama Taught The World About Love

The romance they brought to the White House will be sorely missed.
by Julia Pugachevsky | Jan 11, 2017
Post a Comment
Featured

Though the Obama family will soon leave the White House, President Barack and First Lady Michelle's beautiful marriage inspired the nation for the past eight years with so, so, so many #RelationshipGoals. But just because they're leaving, it doesn't mean they've left the world empty-handed. Here are some of the enduring, adorable, and hilarious lessons they've taught the world about ~love~.

1. Pulling out all the stops on a first date can really pay off. 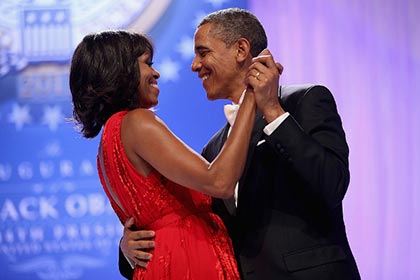 Throughout various episodes of “Dinner With Barack and Michelle," they recalled their first date. “I took her to the art museum, at the Art Institute,” Barack said. “I was trying to impress her and show her I was a culturally sensitive guy, and it worked.” Of the date, Michelle said, “He showed all sides. He was hip... The fountain, nice touch. The walk, sensitive.” Tinder dudes who only pitch bars next to their apartments, take note.

2. Look at the whole picture when you first start dating. 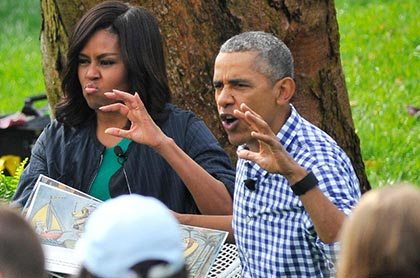 Michelle told The Telegraph: "Look at how the guy treats his mother and what he says about women and how he acts with children that he doesn't know and more important how does he treat you?” So if he takes out his rage on a cashier because the credit card machine isn’t working, GET OUT OF THERE.

3. Don't date anyone you have to dumb or shrink yourself down for. 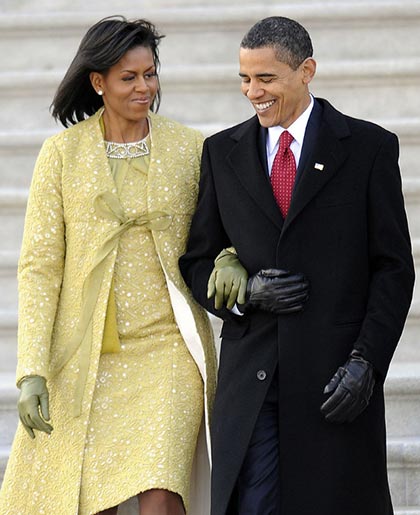 In a panel hosted by Glamour, Michelle said the words every woman should repeat to herself in the mirror daily, TBH: “You don’t want to be with a boy who’s too stupid to appreciate a smart young lady. I want to encourage all of us as young women, as older women, we have to raise our own bars.” Still need convincing? “If I had worried about who liked me and who thought I was cute when I was your age, I wouldn’t be married to the president of the United States today.”

4. You shouldn’t have a shadow of a doubt that your partner is proud to be next to you.

This is the grand entrance you deserve.

5. It’s actually very healthy to not know ~everything~ about each other. 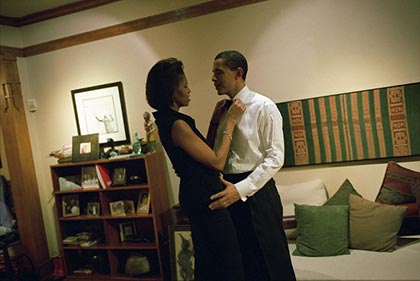 From a 1996 New Yorker interview with the Obamas, almost four years after they married, Barack stated, “There are times when we are lying in bed and I look over and sort of have a start. Because I realize here is this other person who is separate and different and has different memories and backgrounds and thoughts and feelings. It’s that tension between familiarity and mystery that makes for something strong, because, even as you build a life of trust and comfort and mutual support, you retain some sense of surprise or wonder about the other person.”

6. Keeping your career and home life separate is key. 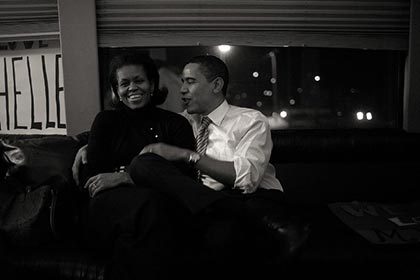 In a New York Times interview, Barack emphasized the importance of work/life balance in maintaining a solid relationship: “What I value most about my marriage is that it is separate and apart from a lot of the silliness of Washington, and Michelle is not part of that silliness.” The inspiring part is that, if the president of the United States can do it, you can, too!
7. Always help each other out, even with the smallest of things. 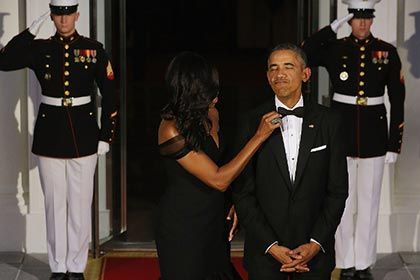 Askew bow ties and all.

8. Finding real time for yourselves outside of Netflix and chilling is crucial. 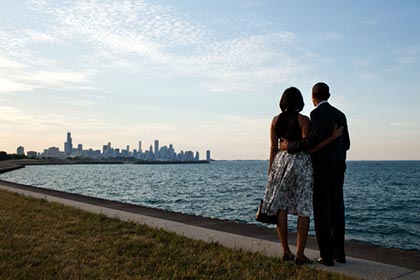 As carefree as couch cuddles are, Michelle brought up a great point in The Telegraph: "We learned how to sustain our relationship at a distance... carving out that time, making sure that we have Friday or Saturday date nights, making sure that it is not just a movie. Because you can't talk at a movie, you can't ask questions and look him in the eye so we usually go out to dinner."

9. But a little TV time never hurt anybody. 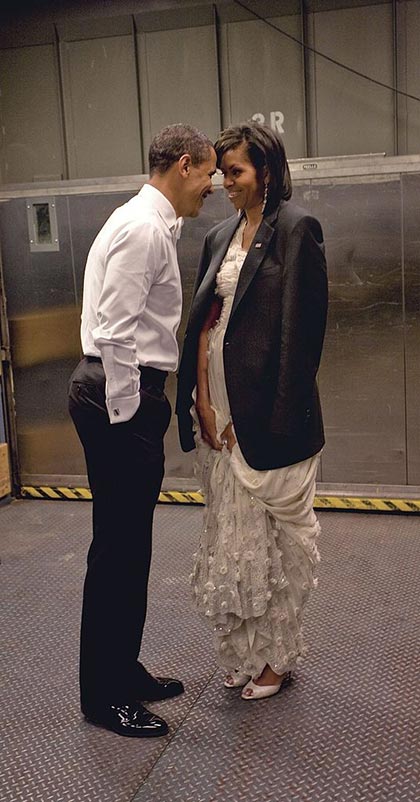 Michelle told Good Housekeeping: "When the kids go to bed and after he's done a little reading, we're usually curled up in our den, and we'll watch a show together. Or we'll talk and catch up. It's nothing major, but that's what marriage is about. Not the big, splashy stuff.”
10. Cute pet names for the things you do together = A+ relationship. 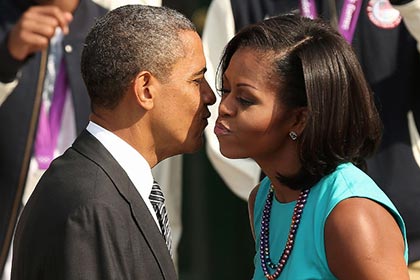 Michelle revealed to PEOPLE the adorable way her and Barack cap off their nights: “We call it tucking. He’ll come and say good night and turn the lights out and give me a kiss, and we’ll talk... he’s like, ready to be tucked? I’m like, yes, I am.”

11. You should have secrets that are just for you two, and you alone.

(Assuming you don’t have cameras documenting your every move, obviously.) 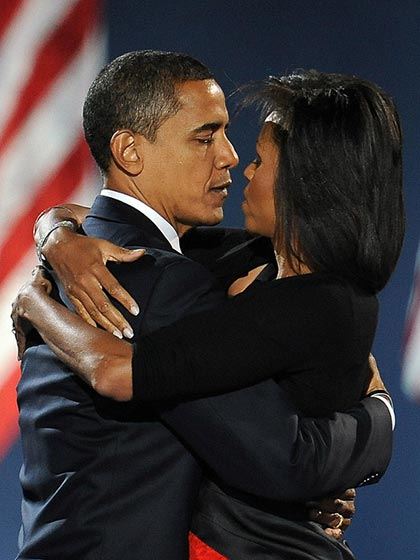 After listing many of the qualities that attract him to Michelle, Barack told Ladies Home Journal, “The quality I love most about her is, she’s honest and genuine... People like that tell you what they think and don’t have a bunch of hidden motives. That’s who Michelle is. She’s also funny. She’s the funniest person in our family."
13. It's a great sign if you crack up at the same things... or just start laughing when you see your partner lose it. 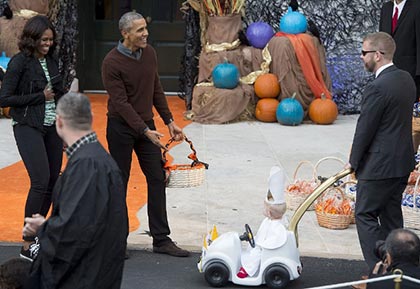 (To be fair, who can look at the Obama-laughing-at-Pope-baby pic and not smile?) 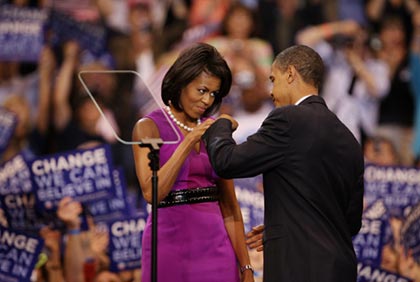 It’s a common belief that you’re supposed to end up with someone crazy about you who always has your back, but that doesn’t mean they’re supposed to provide an endless stream of positive reinforcements. Barack told PEOPLE, “[Michelle] sees the humor in situations where I might be taking myself too seriously... she always knocks me down a peg, and it’s important.”
Continue reading below ↓
15. If you can describe your significant other with a positive Beyoncé lyric, they are probably amazing. 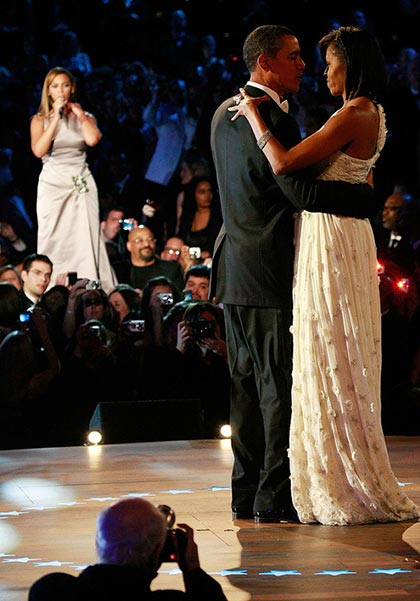 Barack told Vogue, “Michelle’s like Beyoncé in that song, ‘Let me upgrade ya!’ She upgraded me. There’s no doubt I’m a better man having spent time with Michelle.” :)

16. It’s important to remind yourselves of all your happy memories together.

17. If the foundation of your relationship is really strong, you can let the little things go. 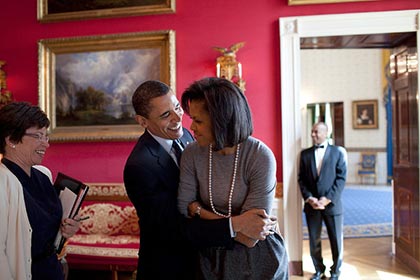 “The journey that we’ve taken together, the fun we’ve had, the challenges we’ve faced, the two beautiful children that we’re raising—I kind of give him a pass now when he leaves his socks on the floor or tells that story for the 100th time and wants us to laugh at it as if we first heard it,” Michelle told Ellen DeGeneres. So good news: Your partner forgetting to fully close cabinet doors will maybe one day become endearing. Maybe.

18. Your priorities as a couple change the longer you’ve been together. 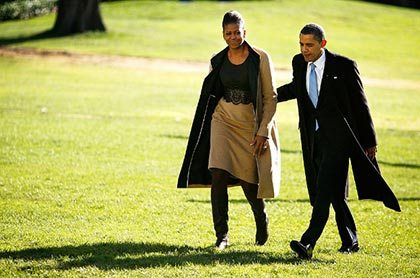 In an Ebony interview in 2007, Barack revealed how his secret to making Michelle feel truly loved has changed over the years: “What I realize as I get older is that Michelle is less concerned about me giving her flowers than she is that I'm doing things that are hard for me—carving out time. That to her is proof, evidence that I'm thinking about her.”

20. The right person will love you for so much more than your career or looks. 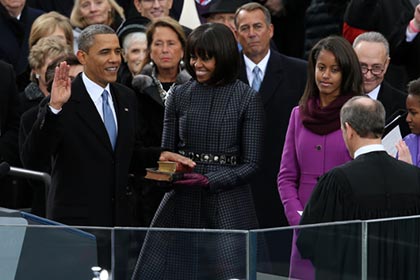 In her 2012 DNC speech, Michelle spoke on loving Barack for more than his political successes: “Even though back then Barack was a senator and a presidential candidate... to me, he was still the guy who'd picked me up for our dates in a car that was so rusted out, I could actually see the pavement going by through a hole in the passenger-side door.”

21. Gender. Equality. Is. Everything.

Barack said it best in Vogue: “It's not as if Michelle is thinking in terms of, 'How do I cater to my husband?' I think it's much more, 'We're a team, and how do I make sure that this guy is together enough that he's paying attention to his girls and not forgetting the basketball game that he's supposed to be going to on Sunday?'” True, beautiful teamwork.

Kiss cam or no kiss cam.

23. There’s a difference between making mistakes and disappointing the person you’re with. 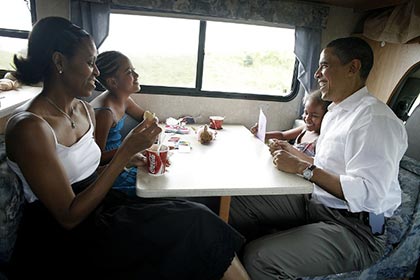 In an O Magazine interview, Michelle outlined the important distinction between occasionally messing up and being wholly inconsistent as a person: “He is steady. Has he made me mad? Yes. Does he sometimes do things that I don't like? Absolutely. But as a human being, he has never disappointed. And I would hope he could say the same about me." Further evidence to not date that guy who keeps panicking and breaking up, only to sext you three days later.

24. It’s important to reflect on how you could be doing more for your partner. 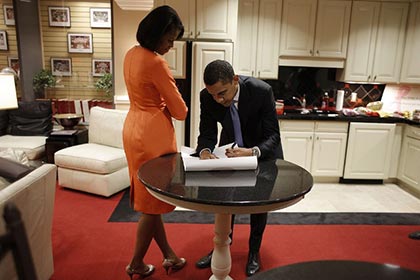 Barack told Vogue: “I’m more comfortable with change and adventure and trying new things, but the downside of it is, sometimes—particularly when we were early on in our marriage — I wasn’t always thinking about the fact that my free-spirited ways might be having an impact on the person I’m with.” He has often remarked on how household burdens fell unevenly on Michelle in the earlier years of their marriage.

25. Always remember why you love them in the first place.

Cuteness will probs be no. 1.

26. Know that, as picturesque as the Obamas’ marriage is, there is no such thing as an easy one. 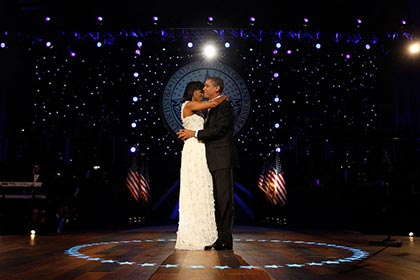 Barack and Michelle are one of the most #goals couples in the history of American politics (or this article wouldn’t exist.) But that’s not to say they didn’t put the work in. “We've been married now 20 years, and like every marriage, you have your ups and you have your downs, but if you work through the tough times, the respect and love that you feel deepens,” Barack told Barbara Walters.

27. The “perfect” marriage is a complete myth and putting pressure on yourself to have it will only make things worse. 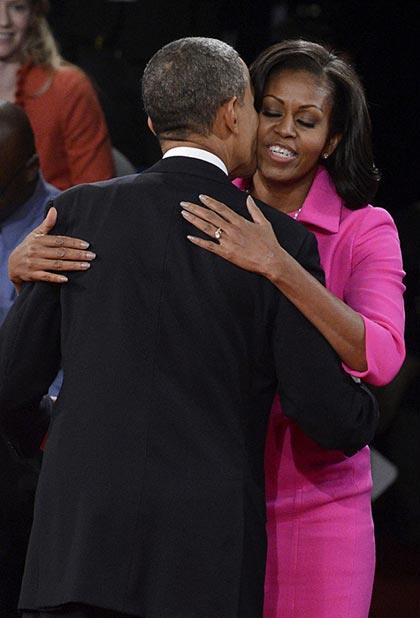 The first lady told the New York Times, “It’s unfair to the institution of marriage, and it’s unfair for young people who are trying to build something, to project this perfection that doesn’t exist.” She also said, “The image of a flawless relationship is the last thing that we want to project.”

28. You should always take a second to thank the one who’s been by your side the whole time.

29. If possible, get Oprah's approval. 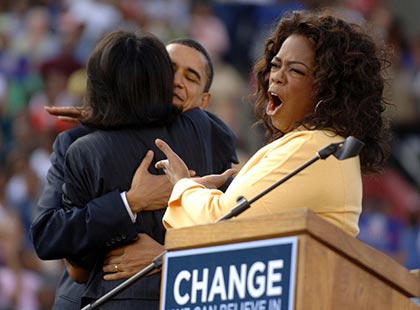