Blast From The Past: Ex-Eat Bulaga! Mainstay Gracia Shows Us Her Clutch

Samantha Lopez in real life and living in Manhattan, she's back for a telenovela.
by Nherz Almo | Aug 31, 2010
Post a Comment
Featured 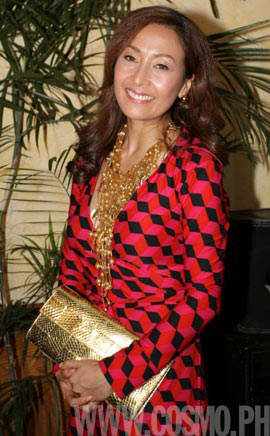 She was first known as Gracia, the Showdown Girl of Eat Bulaga!, before Samantha Lopez left the country in 2002 to be with her husband Warren Edwards.

The dancer-actress was supposed to be part of the upcoming celebrity edition of Survivor Philippines. However, it would take a longer period of time and it would also be more dangerous than doing a normal TV series.

Samantha said she really intended to return to showbiz, even if only for a little while. She even contacted several TV executives, including GMA-7 Senior Vice President for Entertainment, Wilma Galvante, to help her be part of a TV show.

"Once po yata gusto mo ang work mo, hahanap-hanapin mo. So, nandito po ako, not for good, but only for the duration of my soap opera," said Samantha during a press interview for Basahang Ginto.

Since she's been away from local showbiz for quite some time, Samantha admitted that she needed to polish her skills. She willingly went through workshops prior to her taping for Basahang Ginto.

Samantha is now based in Manhattan, New York, where her designer husband Warren Edwards owns a shoe store.

And while she's here, what could be her daily essentials? The former Eat Bulaga! dancer showed us the few items she had in her clutch, which was designed by her husband, during the press conference. Launch the Gallery by clicking on the button below to see them.