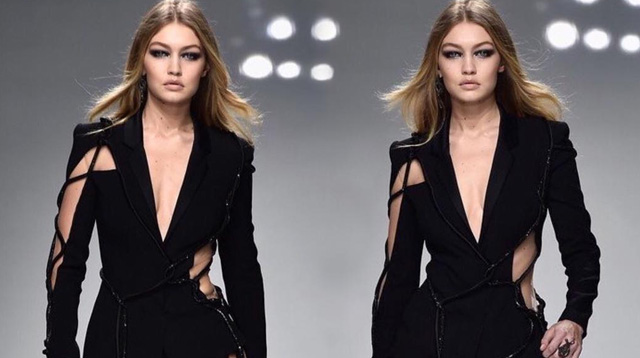 Donatella Versace sent a bevy of supermodels down the runway, in clothes the brand described as a combination of “femininity and dynamism, the strength to overcome obstacles.”

In one word, FIERCE. Work it, Joan Smalls.

Cleavages and legs were in full display. This is Versace, after all.

Rosie Huntington Whiteley walked the show looking every inch the unattainable goddess she is.

As did Adam Levine’s wife. Behati Prinsloo, can we be you?

And Cindy Kimberly-lookalike Irina Shayk. Or is it the other way around?

Landing the plum spot of closing the show, however, was Gigi Hadid. For the finale, she led Natasha Poly, Mariacarla Boscono, and company in a highly glossy, highly glamorous parade down the catwalk.

Gigi wore a black pantsuit that works if you’re a supermodel with zero body fat AND dating the hottest (ex) member of One Direction, but probably won’t fly with your bosses at your corporate job.

Yup, those are cutouts on the arms, waist, and thighs. Something tells us we won’t even make it past the guards in our office building in this look—and they have definitely seen a lot of crazy get-ups.