What Makeup Artist Lala Flores Totes In Her Prada Bag

Her work luggage filled with makeup aside, does this former model carry a lot of personal makeup in her designer bag? Find out what she brought to Angel Locsin's cover shoot.
by CJ de los Santos | Oct 18, 2011
Post a Comment
Featured 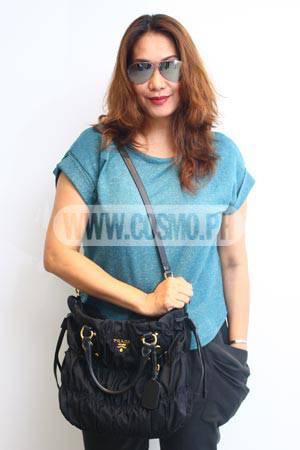 At this month's cover shoot, Angel Locsin wasn't the only model on the set. The makeup artist who worked on her fresh look was none other than Lala Flores, creative consultant to Avon Color and Ford Supermodel of the World Philippines in 1990!

She has since transitioned from modeling to makeup artistry, and she's now one of the most sought-after makeup artists in the country. Now, it's her teenage daughter Danica Magpantay's turn to conquer the modeling industry, after being named this year's Ford Supermodel of the World! We're sure Lala has lots of life experience, not to mention modeling and makeup tips, to share with Danica as the latter makes her mark.

Lala easily establishes a strong rapport with her celeb clients, and has even become one of Angel Locsin's shopping buddies. In fact, when they flew to Hong Kong together for a photo shoot, she ended up buying a Prada bag because Angel convinced her to! This was the bag she brought to Angel's Cosmo cover shoot, so we pounced on the chance to see what's inside, just to give you a peek at the daily essentials of celebrity makeup artists like Lala (and just to take a breather from celeb bags).

You'll be surprised at the lack of a huge personal kikay kit! While she had a separate trunk of makeup that she uses for work, she barely packs any makeup for her personal use (save for a few lip products).

Launch the gallery now to see the contents of Lala's bag. Watch for our behind-the-scenes coverage of Angel's shoot to see how Lala glammed her up!


Don't forget to grab a copy of the October issue of Cosmopolitan Philippines, with Angel Locsin on the front cover and John Lloyd Cruz on the flipside--in stands NOW!