Another male celeb dared to bare the contents of his bag to Cosmo! Sneak a peek at the practical items Echo doesn't leave home without.
by CJ de los Santos | Mar 13, 2012
Post a Comment
Featured 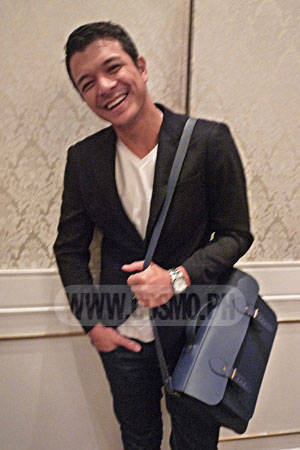 Though you may be used to seeing stylish women featured in our popular What's In My Bag? section, a male celeb makes the cut once in a while. Since Sam Concepcion broke the mold as the first guy whose bag we raided, we've since peeked into other men's bags, including that of former Cosmo Centerfold Jon Avila. Now, we're giving you an exclusive look inside the bag of one of local entertainment's hottest hunks: Jericho Rosales.

We caught up with Echo at the launch of this year's Vaseline Men Xterra Off-Road Triathlon Series at Dusit Thani Manila. We noticed that he was carrying a very trendy navy satchel made by his friend, and we couldn't resist asking him for a quick peek at its contents. Though the oversized satchel trend has caught on among women in recent years, it was previously known as a boy's schoolbag. Echo proved that he can be both trendy and practical, as he proudly shared with us what's inside his roomy bag.

Launch the gallery to see this gorgeous actor's essentials!