Close
WATCH OUR VIDEO SERIES!
© 2022 Cosmopolitan Philippines
Sorry, no results were found for
What To Wear

Remember that time when Lady Gaga arrived in an egg during the 2011 Grammy Awards?

Well, let us refresh your memory...

Yep, the singer is known for her out-of-this-world outfits (See: meat dress), but during the Harper's BAZAAR ICONS by Carine Roitfield party during New York Fashion Week (held September 5th at the Plaza Hotel in New York City), Lady Gaga wowed guests when she showed up looking, well, like herself! 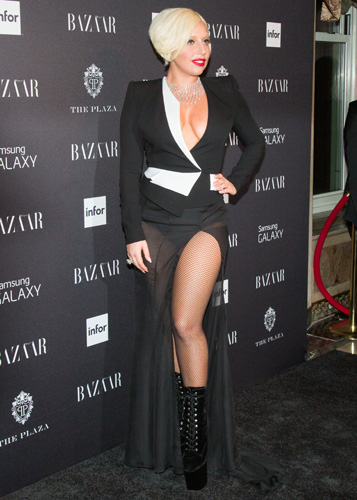 The singer brought along boyfriend Taylor Kinney and wore a black and white custom tuxedo made by her sister Natali Germanotta. In true Gaga fashion, she finished off her look with a thigh-high slit skirt, fishnet stockings, and sky-high black boots. The singer later went onstage to sing some jazz classics like "Cheek To Cheek"—a collaboration she recorded with Tony Bennet.

Check out her performance below!

The black-tie event, presented by Infor and Samsung, was hosted by The Worldwide Editors of Harper's BAZAAR. It celebrated the 19 iconic women in fashion styled by Global Fashion Director Carine Roitfeld and featured in the magazine's September issue. Some of the women were: Brooke Shields, Penelope Cruz, Linda Evangelista, Lara Stone, Cindy Crawford, and Gaga—who graced Harper's September 2014 issue with Asia, her French bulldog! Cute!

Other guests spotted at the party included Isabeli Fontana, Nicki Minaj, Candice Swanepoel, and Karlie Kloss. Launch our gallery to find out who else graced the event!