This Is Why The Queen Always Wears Gloves

Even when she's not wearing her crown, Queen Elizabeth II always looks regal. The monarch attended the first day of the Royal Ascot on last week in her trademark attire: a bright coat, matching hat, big brooch and, of course, those iconic white gloves.

The instantly recognizable wave of her hand lets everyone know Her Majesty has arrived—but that signature greeting wouldn't look quite the same without Cornelia James. The glove manufacturer has supplied the Queen's pairs for more than 70 years.

"The Queen wears gloves because they've always been part of her style," Genevieve James, creative director of Cornelia James, explained to GoodHousekeeping.com. "The mind's eye picture of the Queen is the white-gloved hand waving."

Besides the sovereign's innate sense for branding, the signature accessories afford the Queen another benefit. "They're number one: style. Number two: practical," James adds. "They're necessary because if you're the Queen, you're shaking a lot of hands, so they protect her hands as well." 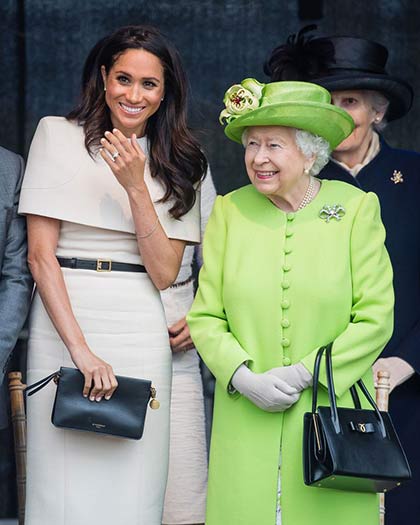 The Queen never wears leather or synthetic gloves, preferring a pure cotton with an elegant suede-brushed finish or an even lighter Swiss jersey. The sleeves always end just under her coat, never exposing her arms.

The design never strays too far in terms of embellishment or color either, with the royal preferring simple pairs—appropriately named "Regina" on the company's website—in white, black, or parchment, which is a soft ivory. However, the brand first caught the eye of royal couturier Norman Hartnell in 1947 for its use of much brighter hues.

Cornelia James, the company founder and Genevieve's mother, fled Austria as a Jewish refugee in 1939. "She literally arrived in London with just a suitcase full of leather," her daughter explains. Her colorful gloves quickly took off in the UK, with the designer receiving placement in Vogue as the "Color Queen of England" not long afterward.

Hartnell, who also designed the Queen's wedding dress, requested a whole suitcase of gloves for Princess Elizabeth's honeymoon as part of her trousseau. Marking the birth of her signature style. 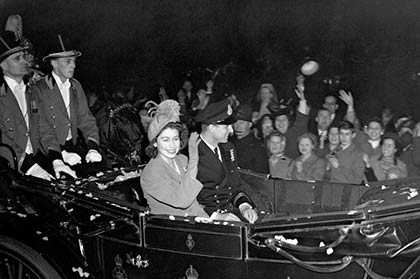 Cornelia James received a Royal Warrant in 1979 as the official glove manufacturer to the Queen. Cornelia herself passed away in 1999 at the age of 82, and her daughter has since taken over the family business.

James estimates the brand has made approximately 60 to 70 pairs for the Queen since then. The economically-minded customer will wear gloves more than a decade old. "I can tell the ones I did from the ones my mother did," James explains.

Given her cost-consciousness, it's no surprise that Cornelia James supplies gloves to more people and businesses than just the Queen. Lady Gaga, Madonna, Taylor Swift, and Rihanna also call themselves customers, not to mention the wardrobe department of Downton Abbey and the stage production of Mamma Mia.

The Queen Mother, Princess Margaret, and Princess Anne have also worn the brand, but Diana, Princess of Wales, notably set a different fashion precedent when it came to wearing gloves at public engagements.

"She abandoned the royal protocol of wearing gloves because she liked to hold hands when visiting people or shake hands and have direct contact," Eleri Lynn, curator of the Kensington Palace exhibit Diana: Her Fashion Story, previously told People.

However, the princess did wear evening gloves on more than a few formal occasions, ordering her first pair from Cornelia James just a day after encountering the designer.

"My mother once met her at a garden party," James recalls. "She remarked to Princess Diana that she should wear gloves because she noticed the princess bit her fingernails like I do. She said, 'My daughter bites her nails, you should wear gloves.' The next day we interestingly got a phone call from the palace."

The princess wore their blue gloves with a Bruce Oldfield gown at Claridge's that very night.

The Duchess of Cambridge, too, has donned pairs before, albeit not the white cotton ones. She's frequently worn merino wool gloves from Cornelia James, including on her royal tour to Scandinavia this winter. 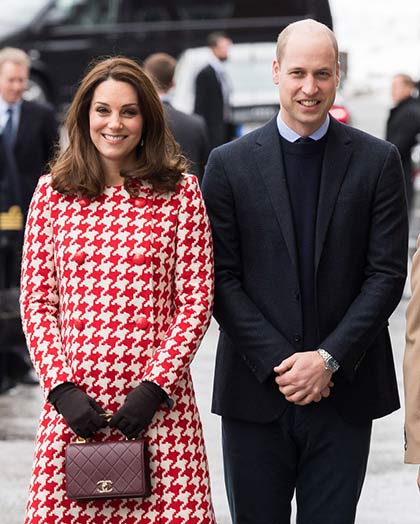 The royal family's newest fashion icon hasn't tapped the brand yet, but James hopes Meghan will come calling soon as she does more events and shakes more hands. "I will wait for her to approach us really," she said with a laugh. "I'm sure she will because she and Prince Harry will be quite active with their duties with the royal family."

Even with a long list of A-list clients, there's still no topping her most loyal customer over the years. "Working with all these famous faces, the only who's really important to me is the Queen actually," James admits. "They're all important, but the best is the Queen. It doesn't get better than that."