WATCH OUR VIDEO SERIES!
© 2023 Cosmopolitan Philippines
Sorry, no results were found for
Style 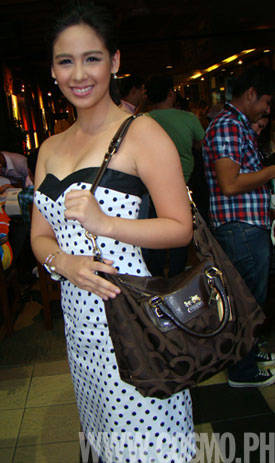 She may be only 17, but it has in fact taken quite a while for her to get her much-awaited break. She's been in the biz for years, having received her first acting award at the tender age of 10. She's also proven her acting chops by playing roles in several episodes of Maalaala Mo Kaya. Now, it's finally her turn to be in the limelight.

Having been in show business for quite some time now, it's quite expected that Empress would spoil herself a little every now and then with her hard-earned money. Cosmo.ph asked Empress' mom if she still asks her for money, and she answered, "Hindi na. Ako na nga ngayon ang driver niya, P.A. niya, lahat. Siya na ang gumagastos sa mga gusto niya."

We asked Empress if we could take a peek into her Coach purse and she was absolutely game, so click through to the Gallery below to see what's in her bag!