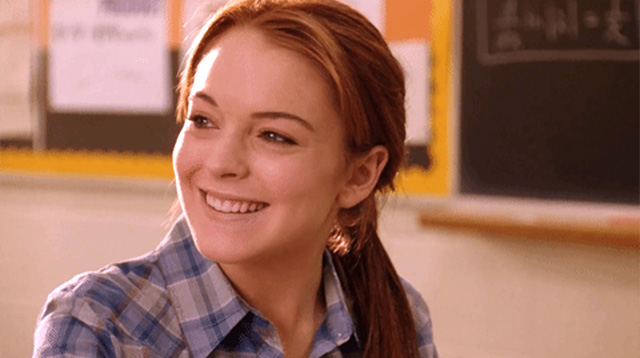 Mean Girls will always be one of those chick flicks we wouldn’t mind watching over and over because, not only is Cady Heron’s initiation into the Plastics world of Regina George, Gretchen Wieners, and Karen Smith a hilarious ride, the movie exposes so many truths—both good and bad—about being a girl.

In honor of the cult teen movie’s 12th anniversary (it first hit theaters on April 30, 2004—who else feels old?!), we’ve rounded up 12 lessons from Mean Girls that still ring true for us girls even well past our teen years. (Although sorry, Gretchen, “fetch” is still not happening.)

2. When it comes to our looks, we are our own worst critics.
Karen’s hips and sucky nail beds, Gretchen’s calves and weird hairline, and Regina’s huge pores and man shoulders—these are just some examples of physical things girls unnecessarily beat themselves up about. Come on, when you look at Regina, is “man shoulders” the first thing that pops into your mind? Thought so.

3. Don’t let the need for compliments and validation rule you, because let’s be honest, a girl can lie about loving your skirt (when really it’s the “ugliest fucking skirt she’s ever seen”).
Who says you need compliments if you know in your heart you're rocking that outfit, anyway?

4. Women should help other women stand up to creeps.
When Jason harassed Cady on her first day at North Shore High School, Regina cut him off and told him to “go shave his back.” Say what you will about the Queen Bee, but at least she’s bold enough to put fuckboys in their place.

5. Ex-boyfriends are off-limits to friends.
In the eternal words of Gretchen Wieners, “That’s just, like, the rules of feminism!”

6. Never dumb yourself down for a guy.
Any guy who can’t accept you for the fabulous math whiz that you are doesn’t deserve you anyway. (Even if he’s as hot as Aaron Samuels.)

7. Beware of saying nasty things about other women; it might come back and bite you in the ass.
You might not have a Burn Book hidden away in your bedroom, but the same principle applies to rumors you spread on the down-low or patama posts you put on Facebook. Women can get catty when the object of their spite is not around, but nobody wants an actual confrontation.

9. Putting other women down to feel good about yourself won’t make you happier.
“Calling somebody else fat won't make you any skinnier. Calling someone stupid doesn't make you any smarter. And ruining Regina George's life definitely didn't make me any happier. All you can do in life is try to solve the problem in front of you.” Wise words, Cady.

10. True girlfriends call each other out when they’re being mean.
According to Cady’s true BFF Janis Ian, “There are two kinds of evil people in this world: those who do evil stuff and those who see evil stuff being done and don't try to stop it.” If Regina had true friends who prevented her from being a bitch instead of kowtowing to her every whim, maybe she wouldn’t have turned into the “selfish, backstabbing, slut-faced ho-bag” she had become.

11. Popularity titles are superficial.
Girls come in so many shapes and sizes and with so many characteristics and temperaments that no one title can encompass what it means to be a woman worthy of credit. No wonder Cady broke her Spring Fling Queen crown into a bunch of pieces and tossed them to the other girls—sharing the title with those who deserved it, too.

Whether it’s joining the math club, being an art geek, slaying at lacrosse, or taking an interest in some other thing that’s not conventionally considered “cool” or “sexy” or “feminine,” do it if you’re good at it and it’s what your ~*heart*~ desires. As Mathlete Kevin Gnapoor so rightly said, “Don't let the haters stop you from doin’ ya thang!”