The champion triathlete has been competing for 17 years, and will only now take a break for nine months to have her firstborn. Be inspired by her achievements for national health and pride.
by CJ de los Santos | May 13, 2011
Post a Comment
Featured 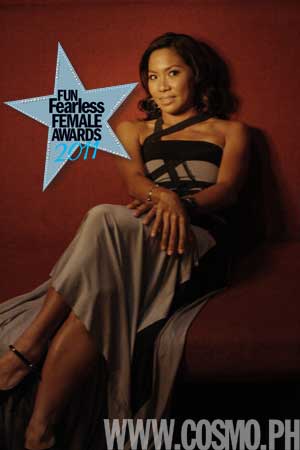 While the country regularly celebrates the international recognition of Filipino singers and sports heroes, we mustn't make the common mistake of overlooking the other devoted figures who often represent our country in their respective fields. There is especially a need to give kudos to the females who have blazed their way into champion positions without much public fanfare. One such admirable Filipina sportster is triathlete Ani de Leon.

Ani has a body most women would kill for. Her enviable toned limbs are a result of a healthy lifestyle and dedication to physical fitness, which has kept her in shape both physically and emotionally ever since she was a child.

But this awe-inspiring athlete is not content with just basking in her multiple victories—she is involved with many sports programs devoted to women and children. With Senator Pia Cayetano, she promotes fitness in public schools for Pinay in Action. As this inspiring woman bikes, swims, and runs her way across countries for her own personal joy and fulfillment, she also proudly wears the Philippine flag on her sleeve.

Launch the gallery to view behind-the-scenes photos of Ani's Fun, Fearless Female shoot. Watch for the video coverage and interview in CosmoTV soon.