This Pic Is Proof That ErwAnne's Wedding Is Happening Soon

Anne Curtis and Erwan Heussaff have one of the most low-key showbiz relationships ever—especially when they kept their engagement under wraps for over a month before Erwan released their proposal video in December 2016.

And although we know next to nothing about their upcoming wedding (these two love keeping things hush-hush), it looks like our fave couple is getting married real soon—all thanks to Erwan's brother-in-law Nico Bolzico!

On August 10, Nico posted a groufie of Erwan's bachelor party in a totally lit party bus. Writing in the caption, he said, "Erwan bachelor party happening tonight! Not much to comment! #nohashtagstagforthis."

Here's also a screenshot of Erwan being dressed up in costume by his closest guy friends in Nico's IG Stories. LOL! 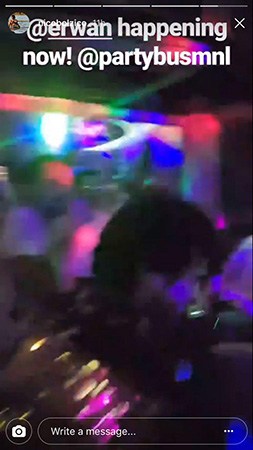 So, why does this mean ErwAnne are getting hitched any time now? Well, engaged couples usually have their send-off parties a couple of weeks before tying the knot. Let's go back to past It Girl weddings as proof.

Erwan's sister Solenn had her bachelorette party in March 2016—two months before marrying Nico in May 2016.

Isabelle Daza held hers in Bali a month prior to getting hitched to Adrien Semblat in September 2016.

And Georgina Wilson's bridal shower was held only a few weeks before her wedding in April 2016.

So, the most important question now is: When is Anne's bachelorette party happening?