An Honest Review Of '13 Reasons Why' Season 2

So much has happened after the tapes. 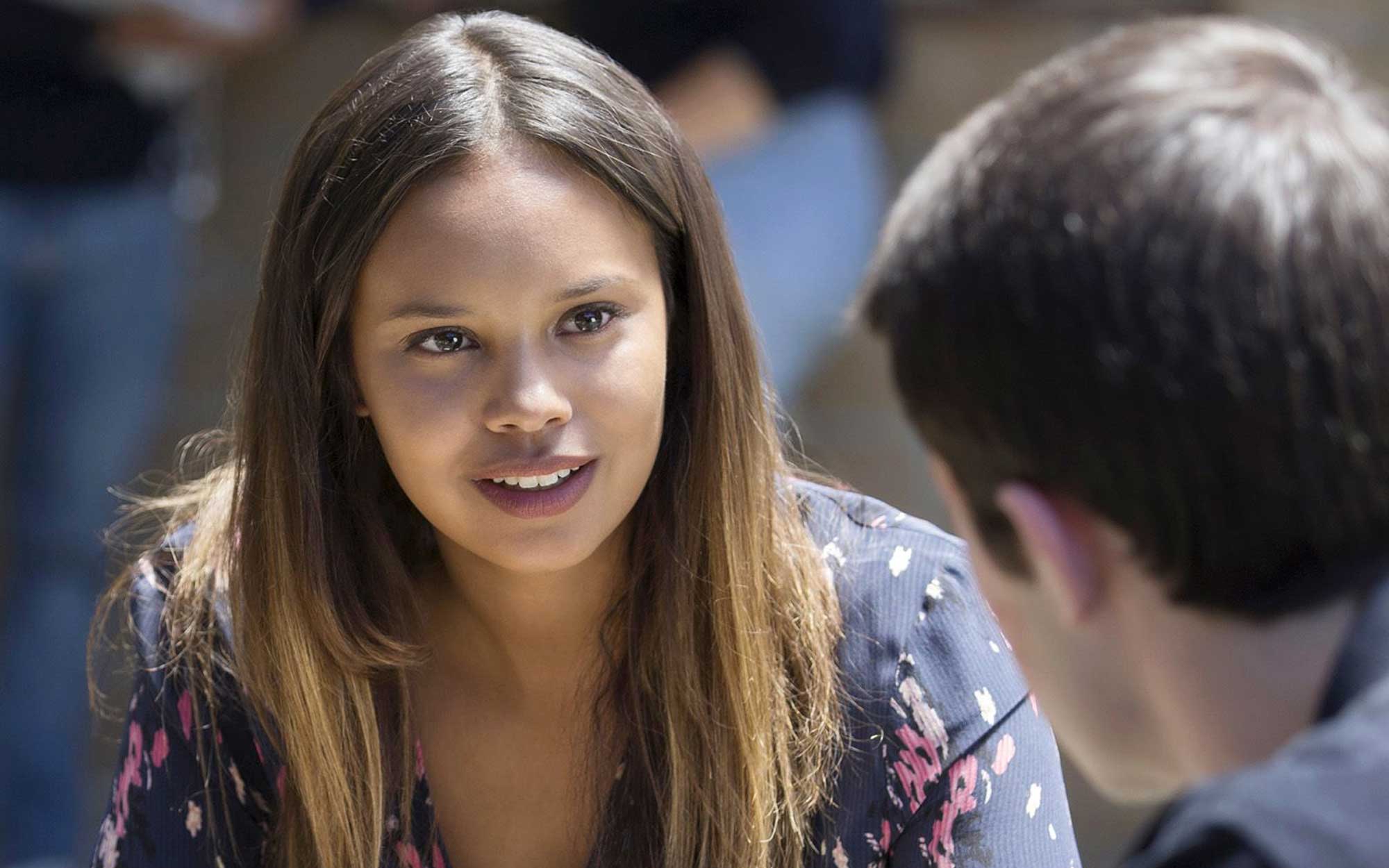 13 Reasons Why season two premiered on April 18, 2018 on Netflix. Here's what we thought of the new season:

It's been five months since Hannah Baker's death by suicide. Her parents, Andrew and Olivia—who, at this point, have heard all the tapes that Hannah left in season one—filed a case against the Evergreen School District, claiming that Liberty High School neglected to protect and help Hannah. The couple rejected the school's settlement offer and their case went to trial. Hannah's friends, schoolmates, and teachers are all due to give their statements in court. During every court hearing, we all get to know Hannah a little more and put together the pieces of her story.

Another major theme of the season follows Jessica's story: How she's recovering from her sexual assault.

As Hannah's circle tries to go on with their lives even with a pending trial, a series of Polaroid photos end up with Clay Jensen. "Hannah wasn't the only one," the writing on the back of the first photo said. "He won't stop," said the next. This prompted Clay to go on a hunt to figure out who's been sending the photos, what they meant, and who "he" is.

This season is really all about how Hannah's friends and family—you know, the ones she featured in her tapes—are all dealing with everything that has happened since her death. For example: Alex survives his attempted suicide but is left partially paralyzed and needs to walk with a cane; Zach remains conflicted about his personal beliefs and his teammates' behaviors; Jessica returns to school and is met with the reality of having to see her rapist almost every day; Clay struggles with his relationship with Skye, as part of him is still very much in love with Hannah.

This season also digs deep into other serious issues: sexual harassment, rape, abuse (in different forms), and even gun violence.

The Main Actors And Where You Last Saw Them:

Before 13 Reasons Why, Anne started in shows like Tyrant and Wicked City. She's done several films including Sand Castles and Mom and Dad. She's also an Emmy-awarded actress for her role as a cancer patient in the show Zac & Mia.

Chelsea has previously starred on shows like Veep, American Horror Story, and even Grey's Anatomy.

Timothy was part of several TV shows like T@gged, In The Vault, and Runaways before landing his role as one of Bryce's closest friends on 13 Reasons Why.

Samantha has had roles in The Fosters, Melissa & Joey, General Hospital, and Teen Wolf.

Since the first season of 13 Reasons Why, Dylan has starred in horror films Don't Breathe and The Open House.

Along with Miles Heizer, Katherine was also in the film Love, Simon, taking on the role of Leah.

Ross was last seen on screen as Reggie on season one of Riverdale.

Before playing Bryce, Justin had stints on shows like Awkward, Those Who Can't, and Preacher.

Tommy previously appeared on shows I, Witness, and The Yearbook.

This show is Brandon's first major project, but you may have seen him out with musician Sam Smith, who just happens to be his boyfriend!

If you followed the show Teen Wolf, then you've probably spotted Alisha in some episodes.

13 Reasons Why is Michele's first major acting role as well.

Devin Druid as Tyler Down

Devin has been in shows like House of Cards, Louie, and Those Who Kill.

Sosie has starred in shows like Scream and Here And Now.

"I think that for the backlash the show has received, season two has given depth to the initial plot and elevated conversation further by taking real word issues and forcing the audience to re-examine their thoughts and judgments of Hannah, her parents, and friends.

"It proves that truly not everything is black and white; it also gives justice and a redemptive chance to the other characters in Hannah's life. I think the show also took its criticisms (of 'glamorizing suicide') seriously by addressing the issues within the script—and to a point, driving forth the idea that society, especially parents, adults, and community resource persons, must look into issues squarely and decide if their sense of truth and justice is helping or worsening the problem." —Anne Cruz

In the opening sequence of the first episode, the actors did a PSA reminding viewers that the show tackled real-world issues that could be disturbing for some. It could be assumed that this is Netflix's attempt to be more responsible for the series, especially after all the negative attention that it got from the first season.

With the many arcs that ran throughout the season, what caught my attention the most was how it grappled with sexual assault, especially in this day and age when the conversation about it is most needed.

In the first episode of the season, the baseball team is given a talk about consent—ironically, by their coach—showing that the school, led by Mr. Porter, is taking steps in educating students, especially the boys, to be better. Perhaps Mr. Porter was drowning in guilt, but he was reaching out. In contrast, another adult, Coach Rick, chose to turn a blind eye about the trial and remained focus on just the sport, ordering his players to keep their issues off the field, making him a part of a big problem. Adults should take time to listen and have serious conversations with teens about sexual assault and what rape culture is—it's never helpful to just let things be.

Aside from Hannah's story, the season closely followed Jessica's journey to recovery after she had finally realized what really happened to her and what she had to do for herself, Hannah, and those who came before and after them.

In the last episode of the season, Jessica is in court waiting for Bryce's—her rapist—sentencing and she gave a powerful statement first addressed to Bryce then to the court. She tearfully recalled every detail that she remembered from the night she was assaulted. It then transitioned to a series of different women—including Olivia Baker—talking about their different experience of sexual assault. And although Bryce's sentencing is disappointing, there was a moment afterward that Jessica realized that even with how things turned out, she somehow felt more "powerful" because her story mattered, no matter what.

It was so sobering to see how the show tackled this issue, because it was terrifying; because it really happens—even in the Philippines. I know that there are several people I've met who are just like Bryce and his teammates. Maybe they haven't gone as far as they have on the show, but their little words and actions are just as terrible and monstrous. It makes you think: Have I done enough? Or am I part of a vicious cycle that won't stop until people start to have a serious and open conversation about sexual assault and rape culture?

Even though the characters of the show continuously talked about learning to move on from Hannah's death, it seemed like Hannah has even greater power over them even from the grave. Clay starts seeing Hannah (As a ghost? An apparition? A figment of his imagination? We'll never know!) as she helps him get the "revenge" that he felt he needed so badly. This is exactly what critics of the show from the first season have constantly talked about—the show suggests that through her death by suicide, Hannah is able to get her revenge and make her wrongdoers suffer.

Also, I found that there was too much going on with all the characters—everyone was broken and had their own struggles, while this is definitely valid, but, it just felt like the writers just added way too many layers to each one of them.

Thoughts I had while watching:

"Uhhh so is Hannah a ghost or something…"

"Ross Butler looks SO fine with a baseball uniform on."

"I don't want to hate the actor who plays Bryce, but DAMN is he convincing! I hate Bryce. What an asshole."

"Poor Zach, SO conflicted with what he believes in."

"Wow, Bryce literally has NO REDEEMING FACTOR. WHAT A MONSTER."

I'd recommend it to:

People who watched the first season and are looking for just a little bit of closure.