Liza Soberano and Enrique Gil's upcoming film, Alone/Together, follows the love story of Christine and Raf who cross paths eight years after they first meet in college. And good news, guys: We have a release date! The movie will hit theaters on February 13, 2019.

LizQuen is making the wait harder for us because they keep posting these bitin teasers! First, behind-the-scenes photos of the two were released, and we got to see what the they would look like as students from UP and UST. Then, we heard them introduce themselves as their characters Tin and Raf. This week, the love team posted more photos on IG with "messages" for each other.

Facebook user Jori Pagarao Lentijas noticed that Liza commented on Enrique's post and wrote, "*pa 'ko," pointing out that he made grammar and spelling mistakes because he meant "pa ako." Liza added the word "Lolz" and heart eye emojis after, though! 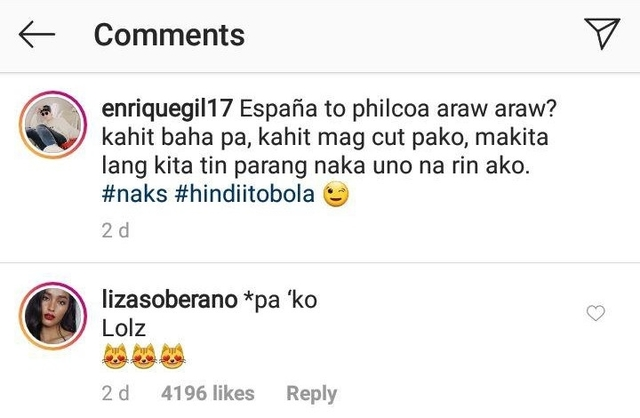 The comments section is on fire, with people applauding Liza and Enrique for still being in character! People on social media are saying that Liza's comment was "very UP" and one even said, "Sorry ha, na-ba-bash na kaming mga Tomasino dahil sa iyo Raf :-(((( Ayusin mo naman, huy!"

We're totally loving this and we can't wait to see the movie!