Maxene On Elmo + Janella: 'They're so mature for their age'

Maxene Magalona showed that she's one supportive ate by posting a sweet Instagram Story of herself with brother Elmo Magalona and his love team partner, Janella Salvador.

"Love these two so much," wrote Maxene in her post. "I actually learn so much from them because they're so mature for their age!"

Maxene also shared that while the two may be big stars, they haven't let that get to their heads: "Even if they are one of the best love teams of today, they're both still so grounded, humble, and God-fearing." 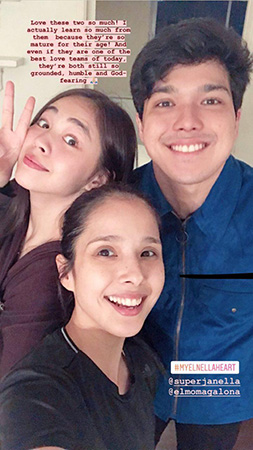 Elmo and Janella's tandem started when they were paired in the TV show, Born for You, in 2016. They also starred in the film My Fairy Tail Love Story that premiered earlier this year.