Nick Jonas And Priyanka Chopra: A Timeline Of Their Relationship

According to The Times Of India, Nick Jonas and Priyanka Chopra will tie the knot on November 30!

An insider added to FilmFare.com, "Nick and Priyanka were recently in India and had even gone to Jodhpur. That was when they decided the gorgeous Umaid Bhawan to be their dream wedding venue.

"They will have a limited guest list of 200 people with only their close friends and family in attendance.

"Since lot of their Hollywood friends are settled in New York, PC is quite excited to have her bridal shower there followed by a grand wedding in Jodhpur."

Here's a detailed timeline of the rest of Nick and Priyanka's relationship, from the heart eye emojis to the engagement.

Nick and Priyanka first spark dating rumours when they show up at the Met Gala together. Fans are quick to agree that these two beautiful people would make a dreamy couple, but there's no confirmation that they are official. In an interview following the event, Priyanka coyly explains that their joint appearance was down to the fact that they were both wearing Ralph Lauren. On Jimmy Kimmel Live! that week, she added: "Yeah, we were on the same table and we already know each other. So he was like 'Hey, you wanna go together?' And I was like yeah, OK, let’s go together. It ended up working out." 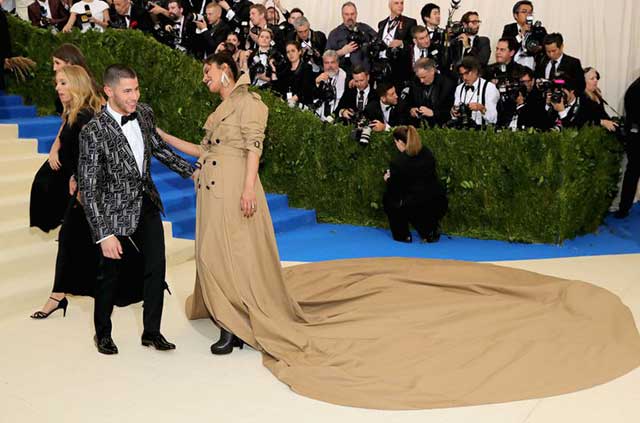 A year later, US Weekly reports that the pop singer and Quantico actress are dating when they are spotted together on three occasions over the Memorial Day weekend. The first sighting is at the Beauty and the Beast Live concert at the Hollywood Bowl, followed by a date at a Los Angeles Dodgers game the next day. An onlooker tells E! News: "They were both very happy and smiley and seemed to really be enjoying each other's company. They didn't show any PDA, just talking and laughing a lot." The same weekend, they are photographed cuddling up on a yacht.

Nick is caught leaving super-cute comments on Priyanka's Instagram. He writes: "That smile" with a heart emoji. Yes, a HEART EMOJI!

She returns the compliment by commenting on a photo Nick shared of his interview with DJ Mustard. 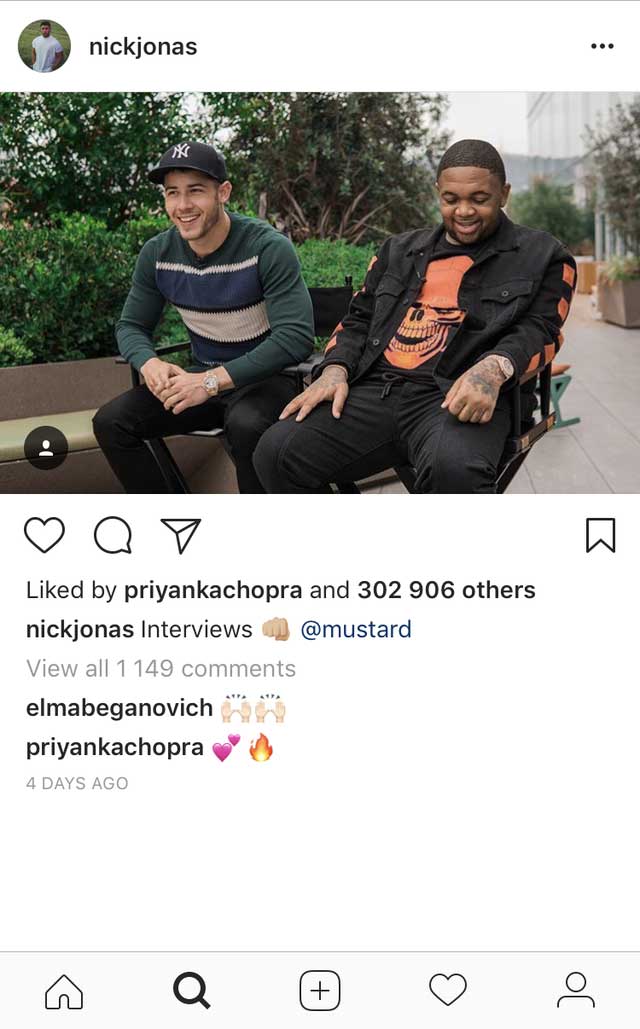 The lovebirds are photographed at JFK airport in New York. It turns out they are taking a big step in their relationship when it's confirmed Nick was taking Priyanka to his cousin's wedding in New Jersey. 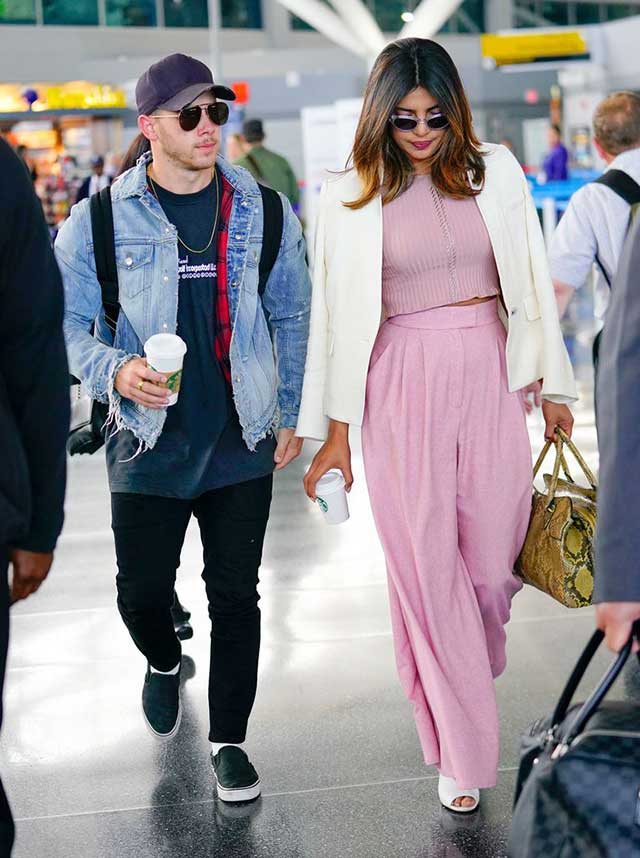 It looks like the relationship is getting even more serious when the couple are seen arriving in Mumbai together. Priyanka reportedly takes Nick to meet her mum, Madhu, and the pair are pictured attending a friend's pre-engagement party. 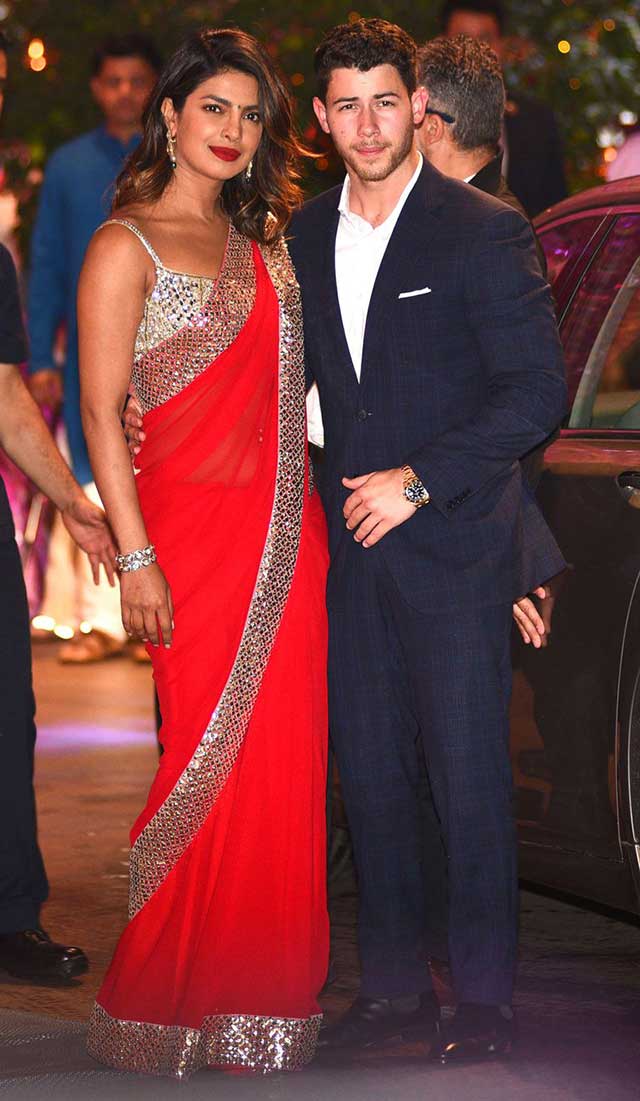 During the trip, they make things Instagram official with an Insta Story of Chopra walking towards Nick across a balcony. Nick posts the clip along with the smiley face emoji—with the very telling hearts for eyes.

Nick and Priyanka go on a double date with Joe Jonas and his fiancée, Game of Thrones star Sophie Turner, in London's Mayfair. Kevin Jonas fifth-wheels. 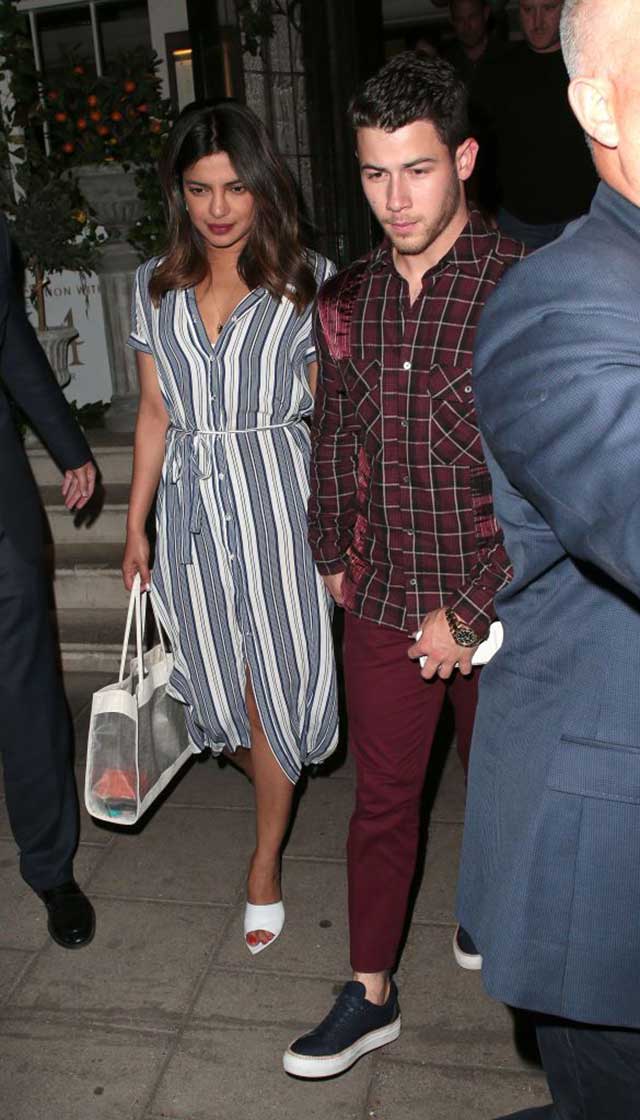 Has she said yes?! The couple are reportedly engaged after a whirlwind romance, a source tells People. An insider says Nick proposed to Priyanka with a Tiffany & Co engagement ring while they were in London for her 36th birthday. Neither side confirms the news. We wait patiently for a glimpse of the ring.

Priyanka is spotted at Nick's concert in Singapore. Twitter user @jjinwoos is one of several fans who shared footage of the actress dancing and cheering in the front row. If this doesn't scream wedding bells, then what does?

Nick opens up about wanting to start a family, and we can only imagine he means with Priyanka. How exciting!

“[Having a family of my own] is the goal,” Nick told Cosmopolitan US at his new fragrance collaboration, JVxNJ, with designer John Varvatos. “It’s definitely something that I hope will happen.”

And the very same day, he appeared to confirm his and Priyanka's engagement. An eyewitness at the same event saw a fellow partygoer congratulate Nick on his engagement, who responded "Thanks, man."

Now if that's not confirmation, then I don't know what is.

Oh hey, Priyanka! Is that a massive engagement ring you're showing off in your selfie with Raveena Tandon? Some fans definitely think so—and it sure looks like it!

Nick's parents, Denise and Paul, arrive in Mumbai to meet Priyanka's mum and dad, Madhu and Ashok, who are throwing an engagement party for the couple.

A source recently told E! News: "It's a tradition for them to meet before the wedding and Priyanka's family insisted on hosting the Jonas family in their country.

"Priyanka wants everything to be traditional to respect her family's values, and definitely an Indian wedding. All of the plans are moving quickly and Priyanka and Nick do not want to have a long engagement."

Priyanka posts the same picture with the caption: "Taken... With all my heart and soul..."

Later on in the day: 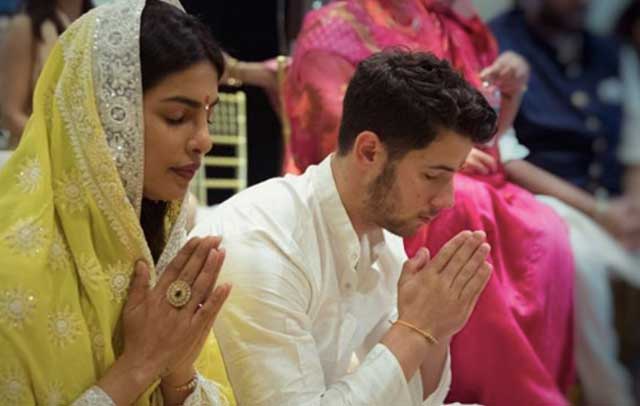 Priyanka's future sister-in-law—Sophie Turner—posted the cutest Instagram about how excited she is to welcome Priyanka into the fam.

"First I’m blessed with an incredible future brother-in-law, and now such a beautiful, inside and out, future sister-in-law. I’m so excited to welcome you into the family @priyankachopra . I love you both @nickjonas."

Nick's brother Joe also took to Instagram to congratulate the couple with the sweetest message, and can we just be a part of this family already?

"I couldn't be happier for my brother. Welcome to the family @priyankachopra We love you"

Nick shares a video on Instagram of Priyanka dancing, along with the caption, "St. Catherine Orphanage today. My heart is full."

A clip emerges of Nick and Priyanka's mums dancing together, as Madhu Chopra teaches Denise Jonas some traditional desi moves. So cute!

Nick takes to Instagram to share a scenic photo that Priyanka took of him while on a romantic holiday together in the Mammoth Mountains in California.

Nick Jonas' ex-girlfriend Olivia Culpo is asked what she thinks about his "lightning-fast engagement" to Priyanka Chopra, and has the most respectful response.

"I think that any time anybody can find love, especially in this industry, because it's difficult, you can see there's a track record of things not working out," Olivia told People when put on the spot about Nick's big news. "So I'm so happy for him."

"I wish that everybody can find love and happiness. That does not mean that I would not wish that for him."

The pair dated for almost two years, after meeting in 2013 and parting ways in 2015, with Nick commenting to Extra at the time, "She’s an amazing person. We had a great, beautiful few years together, but it’s been a crazy couple months, and I wish the best to her for the future, but it’s tough." 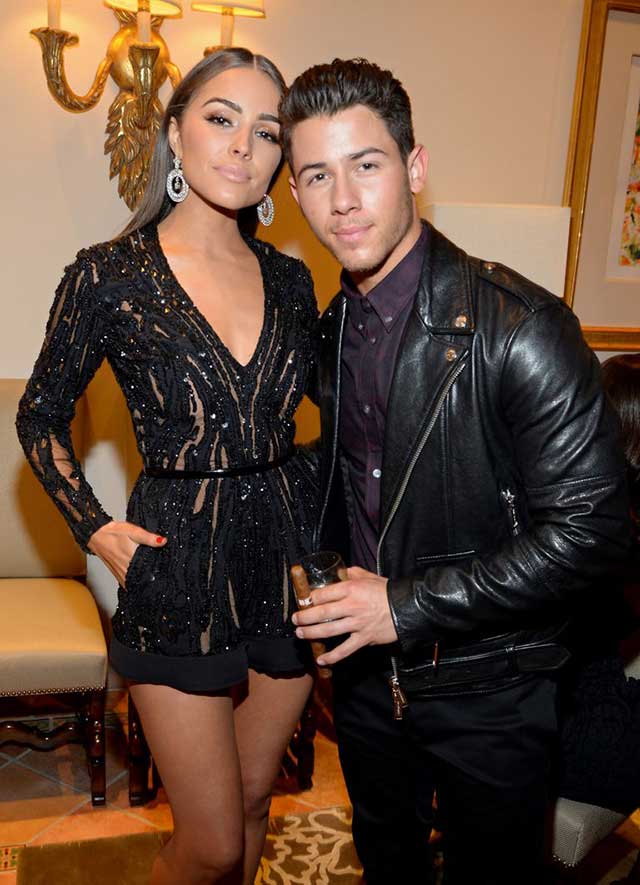 Nick and Priyanka double date with his brother Joe Jonas and his fiancé Sophie Turner at the US tennis open. Looked like a ball, tbh. 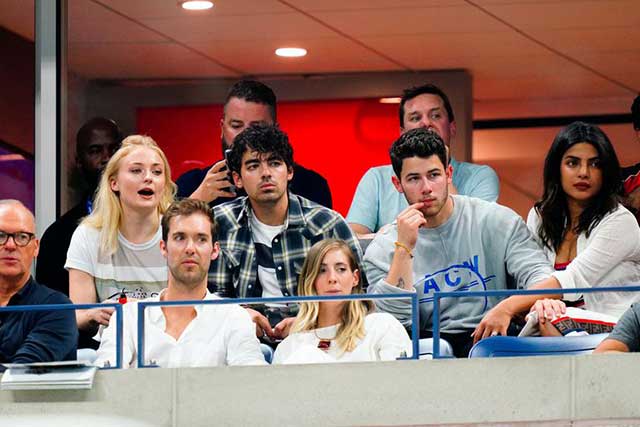 Priyanka sent Nick the sweetest Instagram message to celebrate his 26th birthday, writing, Happy birthday baby. @nickjonas" with an unseen picture of them at a sports game.

"Ranch life," Priyanka Chopra wrote on Instagram, while Nick shared a photo along with the caption, "Out on the ranch."

Priyanka cheers fiancé Nick on as he plays football with a bunch of Bollywood stars, including MS Dhoni, Aditya Roy Kapoor, Shabir Ahluwalia, and Kunal Kemmu in Mumbai. 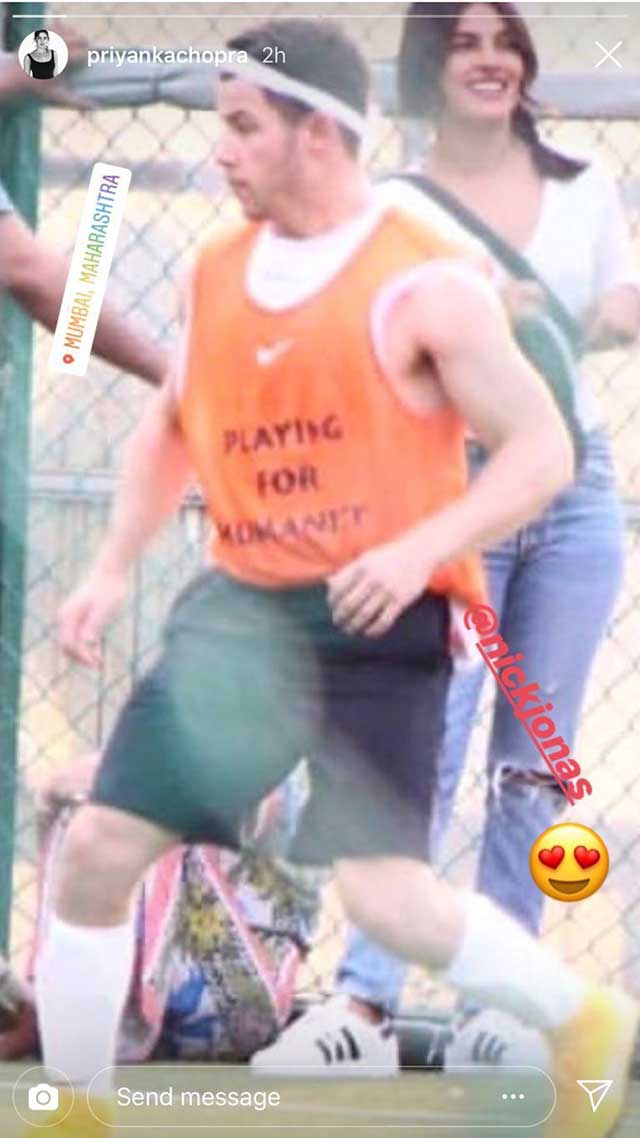 According to The Times Of India, Nick Jonas and Priyanka Chopra will tie the knot on November 30!

An insider added to FilmFare.com, "Nick and Priyanka were recently in India and had even gone to Jodhpur. That was when they decided the gorgeous Umaid Bhawan to be their dream wedding venue.

"They will have a limited guest list of 200 people with only their close friends and family in attendance.

"Since lot of their Hollywood friends are settled in New York, PC is quite excited to have her bridal shower there followed by a grand wedding in Jodhpur."