Pia And Marlon Seem To Have Deleted Their Couple IG Photos

1 Instagram followers of power couple Pia Wurtzbach and Marlon Stockinger have noticed something missing from both of their accounts: couple photos. This "disappearance" prompted netizens to speculate the end of the Pia-Marlon relationship. But are they really over? The two were apparently spotted in events a few weeks ago and were just on vacation in Mexico over the weekend. So, what's up, guys? (PEP.ph)

"Growing up, before MySpace ranked your top 8, we used to joke we were each other's 7th or 8th best friend. But that changed when we finally moved to the same city and went to college together. He instantly became a best friend and my absolute arch-nemesis in just about any competitive sport you can think of, Super Smash Bros included.

"His unique personality is contagious and anyone who knows him is bound to have picked up a few of his slang words or offbeat mannerisms. He's spent the last three years traveling the world and influencing people through his Vlog channel. His latest video is inspiring as hell but the news was hard for me to take in. Please give it a watch—it's a perfect introduction to one of the people I care about most. Love ya Wil, since '92."

3 Maine Mendoza is currently living the ~life~ in Japan with her Eat Bulaga! co-stars. And while she's at it, here are a few of her IG-worthy snaps!

4 Katy Perry reportedly avoided Taylor Swift's big music video debut of "Look What You Made Me Do" on the recent MTV VMAs. Well, it was because Katy was also the host that night and was backstage changing into one of her maaaany outfits! "Everyone backstage was going insane over it, and a few people gave her the highlights," a source told E! "Knowing Katy, I'm sure she has seen it by now."

The source also added that Katy wants nothing more than to be over her whole feud with Taylor: "Katy wants the Taylor war to be in the past and she is focused on moving forward. Katy wants to be cool with Taylor, but [Taylor] isn't budging. Katy is focusing on herself and her upcoming tour right now and doesn't want any bad energy." (Cosmopolitan.com)


5 Want to kick-start your modeling career? Learn from the pros themselves! Professional Models Association of the Philippines (PMAP) will facilitate a two-day open workshop (September 17 and 24) available to the public for the first time in 30 years. See the deets below: 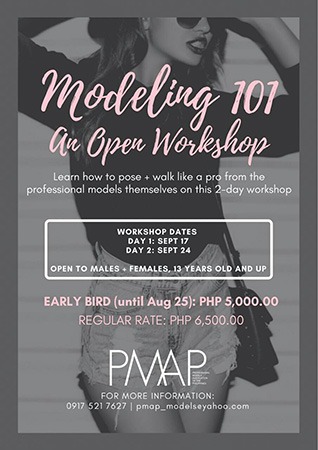