This young woman didn't allow a bombing incident that made her lose her legs hinder her aspirations of becoming a lawyer. Be inspired by her fearless story of recovery.
by CJ de los Santos | May 18, 2011
Post a Comment
Featured 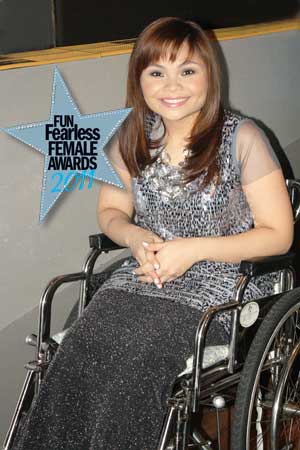 It was a not-so-ordinary Sunday in September when Raissa Laurel headed to Taft Avenue to attend the bar exam salubong, all dolled up for a concert that would take place at her college later that night. The next thing she knew, she was in massive pain as a bomb went off nearby. She was conscious throughout the whole ordeal.

She lost both her legs and, according to doctors, had a 20 percent chance of survival. After a period of shock and depression, she turned to her faith and the support of her family and friends to help lift her spirits. Her strength in the face of a tragedy, which injured 44 people that day, inspired countless supporters to visit, donate blood, and send their well wishes.

You girls voted for 24-year-old Raissa as your Inspiring Role Model because of her perpetual positivity and refusal to lose hope. She is still studying to become a lawyer, and recently regained the ability to walk with the assistance of prosthetic legs (which she used when she received her trophy at the Fun, Fearless Female Awards Night). View behind-the-scenes photos of our shoot with this admirable young woman when you launch the gallery.