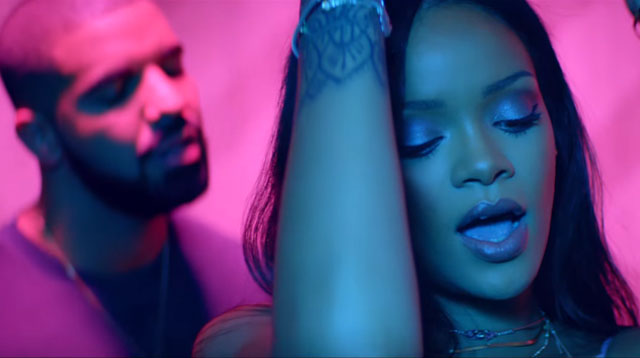 Rihanna is steaming up the Internet with two racy new videos for her new song “Work.”

In the first video from Director X, who worked with Drake on “Hotline Bling” and Rihanna on her breakout hit “Pon de Replay,” the sexy R&B star dances and twerks in a nightclub alongside collaborator Drake as the rest of the crowd smoke joints and sip alcohol.

The singer appears in a two-piece bikini and a colorful mesh top in the video, but leaves little to the imagination in the second video, directed by Tim Erem, as she dances suggestively for Drake in a sheer top which leaves her breasts clearly exposed.

Rihanna, who celebrated her 28th birthday on Saturday night, has never had issues with public nudity, often appearing naked in magazines and on covers. The Barbados beauty also likes to show off her curves on the red carpet in revealing outfits, most notably letting it all hang out at the Council of Fashion Designers of America Awards in 2014, when she wore a sheer, full-length Adam Selman dress to accept the Fashion Icon of the Year prize.

She also set the Internet on fire in 2014 with a revealing photospread for French magazine lui.

Appearing completely naked in a series of poolside shots taken by Mario Sorrenti, Rihanna also appeared sweaty and topless on the cover—a shot she posted on her Instagram page, which prompted bosses at the image-sharing website to threaten to pull her account if she kept testing their nudity policies.

Her provocative nature has also landed her in trouble with her mother, who is not a fan of her daughter's penchant for nudity.

"I'm not afraid of any person in this world but her," the singer admitted to Elle. "She called me two days ago and reeled me in about two naked pictures Melissa [Forde, best friend] put up on Instagram—a sneak-peek from a photo book she's making about me."

"My mom, she went crazy on me," she added. "I was, like, embarrassed. I felt like I got my a** whipped in front of my class in school! She said, 'This was, like, a private moment and you're just parading this around.' She humbled the s**t out of me."

It's also not the first time Rihanna has stripped for a music video. Outtakes from her “B**ch Better Have My Money” release last year show the confident star in a see-through plastic dress and a white thong, although those scenes didn't make the final cut.