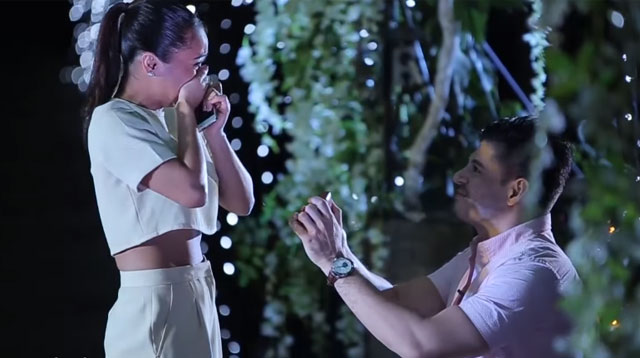 1 Rochelle Pangilinan couldn’t help but cry happy tears when she was asked by her boyfriend of seven years, Arthur Solinap, to marry him. The perfectly mapped out wedding proposal was held at the place where the couple first met, Balay Indang Resort in Cavite, with close friends and family in attendance. Arthur only had the sweetest words to say to his actress girlfriend when he got down on one knee, “’Di ba lagi nating kinakanta yung ‘Ayaw Ko Tumanda?’ Ang totoo talaga no’n, ayaw ko tumanda na hindi ka kasama. Lagi nating sinasabi na okay lang lahat basta magkasama tayo? Thank you for everything.” (ABS-CBN)

2 Angel Aquino totally fangirled when she met Meryl Streep at the 66th Berlin International Film Festival held in Germany, where the Hollywood legend served as the festival’s jury president. Angel, along with Piolo Pascual, John Lloyd Cruz, and Paul Soriano, was among the Filipino team representing Lav Diaz’s eight-hour epic film Hele Sa Hiwagang Hapis which won the Silver Bear Alfred Bauer Prize. Here’s a pic Angel posted of her and Meryl exchanging kisses with a photobombing JLC at the back. Angel writes, “This kiss.. Not even in my wildest dreams.. I almost did not survive it. I thought I can never love Meryl Streep more...”

3 Hello, world! Meet Saint West! Kim Kardashian posted the very first photo of her baby boy Saint on IG and, we must admit, he is ADORBS!

4 Lea Michele and her boyfriend of nearly two years, Matthew Paetz, have called it quits early this month. Lea is said to be doing fine and is focusing on her work. Matthew was Lea’s first boyfriend after the tragic passing of her fiancé Cory Monteith in 2013. (Just Jared)