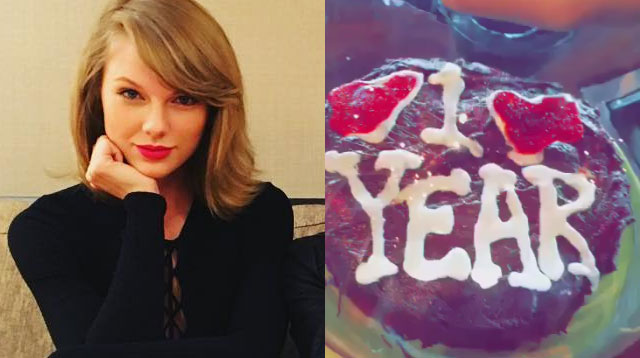 Taylor Swift and Calvin Harris have officially been a couple for a year.

In celebration of their romance, the “Love Story” singer took to Instagram to share a photo of a gold locket with "3.6 2015" engraved on the front, marking the date of their anniversary.

Meanwhile, the Scottish DJ shared a video on Snapchat, featuring a cake decorated with hearts and the phrase "1 Year" atop the chocolate frosting. In the clip, he says, "One year! We got one year cake! One year," before handing the spotlight over to his girlfriend, who also shares her excitement over their milestone.

SOS: @CalvinHarris posted a video Snapchat with @taylorswift13 celebrating their one year anniversary together! ???? ???? pic.twitter.com/w3qgbsa5R1

The lovebirds were initially introduced to each other by mutual friend Ellie Goulding during the Elle Style Awards in London on February 2015. A photo recently emerged on Instagram of the couple, literally right before they met for the first time!

The two hit it off quickly and they made their debut as a couple at the 2015 Billboard Awards in May. Since then, they've posted various photos of themselves together on social media, but have kept fairly mum on their relationship.

In July, Calvin spilled on their high-profile romance, telling U.K. radio station Kiss FM, "It's going absolutely fantastic. It’s interesting, because obviously there’s different things written about it every day and even if we don’t do anything publicly for awhile, someone will make something up.

"For me, it could be a lot worse, and I’d still be like, insanely happy with her. So, I'm good with it."