Jacqueline Carlyle is the boss Andy Sachs wishes she could have had.
by Cosmopolitan US | Jun 19, 2018
Post a Comment

In the age of think pieces about millennial entitlement, it can be hard to find a TV show that manages to both critique our social media–obsessed culture and engage with it. Now on its second season, The Bold Type continues to be this kind of show—capable of poking fun at the world of Instagram and Twitter without discounting it as a real force in young people's lives. Set in and around the fashion magazine Scarlet (which, full disclosure, is partially based on Cosmopolitan) the show follows its three protagonists as they struggle to establish themselves in their careers, without judging them for their interest in fashion, Twitter followers, or whatever else. It's a refreshing alternative to common depictions of millennials as lazy whiners and women's magazines as offices full of backstabbing harpies.

It's hard to talk about a show like The Bold Type without comparing it to the beloved classic The Devil Wears Prada, the 2006 movie that gained a cult following for its depiction of the high-stress, insular environment of glossy magazines that launched the fashion dreams of a million young girls. After more than a decade, it remains a touchstone for writers and fashionistas who dream of making it in New York City, but with its army of clackers, demanding bosses, and strained friendships, it's a disheartening take on what life is like for a career woman.

While that film began with one woman's disdain for fashion and gradual, grudging acceptance of its merits, The Bold Type starts with three women who already have a deep appreciation for the way pop culture and fashion can be used to discuss the relevant issues of the day in fun and engaging ways. The show is about what happens after that reverence has already set in, and how these women can then contribute to the work their magazine is doing without going through the openly scornful stage that Andy did. In some ways, The Bold Type can be seen as a feminist reimagining of The Devil Wears Prada, swapping out the plucky Andy Sachs for three protagonists who are ambitious but still supportive of each other's adventures. By having its characters help each other rather than envy one another's success, The Bold Type paints a picture of survival in an often-crushing industry while keeping an eye on the popular feminist topics of today. 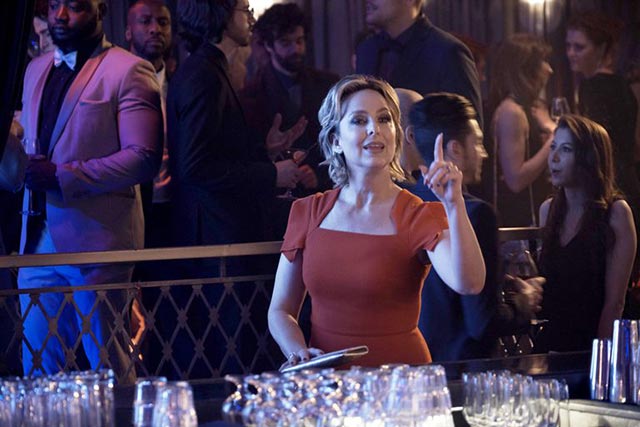 There are shades of Anne Hathaway's Andy Sachs in each of The Bold Type's three main characters. At the beginning of the first season, Jane has been newly promoted as a writer and is struggling to find her voice. While Scarlet is increasing its political coverage, it butters its bread with sex and relationship stories about issues that Jane isn't yet comfortable discussing with her friends, let alone writing about for a national publication. Like Andy, she considers herself a "serious writer" and is initially quite open with her annoyance about being assigned to "shallow" lifestyle pieces. Then there's Kat, who's successful at work but falling behind in her personal life. After a meeting with an Iranian photographer named Adena shows her that she might be attracted to women, Kat spends the season navigating her sexuality while helping Adena with her immigration issues. Rounding out the trio is Sutton, who feels left behind in her job and must figure out how to move her career forward in a way that helps her achieve her dreams.

Unlike Andy, these young women have each other to rely on, and that makes all the difference. Andy's friends shamed her for taking her job seriously and punished her once she fully devoted herself to it, but Sutton, Jane, and Kate support each other through every difficult decision, even if it puts a temporary strain on their friendship. It's no wonder that when things truly got tough, Andy left Runway, while Sutton stuck it out and maneuvered herself into a better job, Kat explored a new side of her sexuality and took on bigger responsibilities at work, and Jane learned how to finesse her way into political writing by accessing it via topics she'd previously thought were too "fluffy."

One of the biggest ways the two stories differ is in their portrayal of the editrix who holds the main characters' fates in her hands. While Miranda Priestly is famously a delicious villain and an impossible-to-please ice queen, The Bold Type's Jacqueline Carlyle exists more as a mentor than a tormentor. People respect Miranda because she has a long history of pushing fashion forward, but she's notoriously difficult and dismissive of those who don't deliver excellence on the first try. Jacqueline, on the other hand, is a kind and encouraging boss who identifies the strengths in her staff and guides them through weak moments so that they can continue to grow and excel in their careers, even if that means they eventually move on from Scarlet.

The show's season-two premiere demonstrates this perfectly: At various points, Jacqueline guides each of the girls professionally and helps them discover new things about navigating their jobs. She shows Jane—who doesn't even work at Scarlet anymore!—that it's OK to outgrow a position that doesn't fit and strive for something bigger. She helps Sutton understand that other people's perceptions of her don't impact her skills or track record of success. And with Kat, she guides her in her new responsibilities and helps her understand that increased visibility comes with increased power and social responsibility. For all of them, Jacqueline is a titan they can measure themselves against, who will hear their problems and concerns without judgment. That kind of transparency didn't exist in The Devil Wears Prada. Andy constantly had to interpret her boss's opaque motivations and fight to earn her respect and regard. What might her Runway career have looked like if Miranda had bothered to nurture her talents?

While Miranda was a clichéd example of a professional woman transformed into a cold, vicious harpy by the rigors of maintaining a hard-won position, Jacqueline presents an alternative, where high-achieving women can retain their humanity and lift other women while they climb. At all times, Jacqueline is warm, inviting, and looking out for the best professional interests of her employees. She relates to their struggles as young women in the industry, and draws on her own experiences to teach them lessons about how they can avoid her mistakes and make better decisions. The Bold Type tackles issues like workplace sexual harassment and equal pay head-on, and allows Jacqueline to serve as a well-rounded avatar for the kind of boss we all deserve.

The Devil Wears Prada might have been the film that made working in fashion look glamorous and desirable, but The Bold Type is the show that acknowledges the difficult realities of that experience. Andy had to deal with a challenging career without a support system or a nurturing boss, but The Bold Type reframes her story as a chapter in life that can be survived with the right people at your side. It's a fitting message for a world filled with young women struggling to find ways to put their feminism into practice.