We don't know about you but we're still definitely on a Crazy Rich Asians high. Anybody would agree that one of the best things about the movie is its soundtrack. After all, it's hard to recover from Katherine Ho's amazing cover of "Yellow" by Coldplay. We spoke to the talented millennial who made everybody cry ugly tears during CRA.

How were you approached to do the cover and what was your reaction?

In high school, I attended a summer camp called A Cappella Academy for three summers. I don't know if I can find the words to accurately express how wonderful A Cappella Academy is. I have grown so much as a musician and as a person from attending this camp and have met the most incredibly talented, kind-hearted people.

After I graduated high school and became too old to attend camp, I kept in touch with one of the founders/directors, Ben Bram, through my involvement with Snowfall, a pop/jazz a cappella caroling group that Ben founded and managed. Ben is a GRAMMY award-winning vocal arranger and producer, known for his work with the a cappella sensation Pentatonix, the Pitch Perfect movies, and The Sing-Off, among many other credits.

It wasn't until an hour before the recording session of the song that Warner Brothers called me and told me what the project was for. When I found out it was for Crazy Rich Asians, I fangirled so hard.

A few weeks after our caroling season had ended, Ben texted me and asked if I could sing in Mandarin. He said he wanted to submit my profile for a TV/film project. Neither of us knew what it was for, but regardless, I was very excited for the opportunity to sing something in Mandarin. Although my Mandarin is nowhere near perfect, I did grow up singing and dancing to Mandarin music in my city's annual Chinese New Year show. I also attended Chinese school every Saturday. I believe that if not for these foundations that my local Chinese community encouraged me to build, I would not have booked this job.

After Ben texted me, he connected me with Jasper Randall of Encompass Music Partners, a vocal contractor for the film Crazy Rich Asians. Jasper sent me the demo materials for "Yellow" and his team needed my audition demo by the next morning, so I was pressed for time. I remember being on the phone with my dad super late into the night, and he helped me tremendously with pronunciation, vocabulary, and understanding the emotion of the song. I remember I was so exhausted from schoolwork that I fell asleep in my freshman dorm's practice room where I was calling my dad. I woke up in a panic at around 7 a.m., spent a few more hours practicing, and then recorded my demo right before chemistry class. 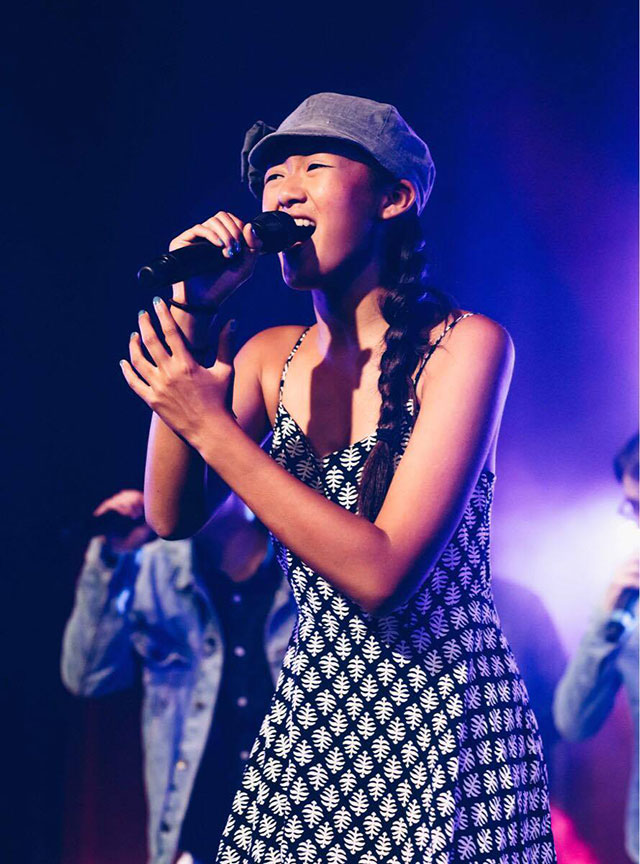 A few days passed with no news, so I just assumed that I didn't get the job. Then one night, I was doing homework, and I got an email from Jasper saying that I had gotten the job! At this point, I still had no idea what this song was going to be used for, but I was so excited regardless and quickly ran to the bathroom to call my parents.

It wasn't until an hour before the recording session of the song that Warner Brothers called me and told me what the project was for. When I found out it was for Crazy Rich Asians, I fangirled so hard.

At the recording session, they played me the scene of the movie that "Yellow" was going to be used in, and I actually got nervous knowing that I would be recording something that would be played in one of the final scenes of the movie. But the nerves were definitely outweighed by excitement and joy; The Math Club and 3 Chords Studio were a dream to work with, the Warner Brothers executives were so kind and encouraging. My dad was there to act as the dialect coach, and the music supervisor Gabe Hilfer and director Jon M. Chu even stopped by for a little bit to say hi and made sure the session was running smoothly.

What was it like to meet director Jon M. Chu?

Jon was so kind. He graduated from the University of Southern California (the university that I currently attend). We talked about that connection of the song to the movie, and he also showed us some pictures of his adorable daughter, Willow. It meant a lot that he took time out of his super busy schedule to personally come see me and made sure the recording session was running smoothly.

Did you expect the overwhelming response the public had towards the movie, specifically the scenes where "Yellow" was played?

I expected that the movie was going to generate an overwhelming response. I got to see an early screening of the movie [in] June, thanks to Cheryl K. (she sang the opening song and credits song, "Money") who was incredibly kind to set up a private screening with Warner Brothers.

After I saw the movie, I knew it was going to be a hit. The entire cast was mesmerizing, and the story was heartwarming and poignant. Furthermore, this film is the first Hollywood production in decades to feature an all-Asian cast. I predicted that this was going to be a huge deal for Asians in America and around the world. But I didn't expect the film to be received so well even by non-Asians. I think that this is because the film is based on universal themes like love, family, and self-realization that everybody, Asian or not, can relate to. 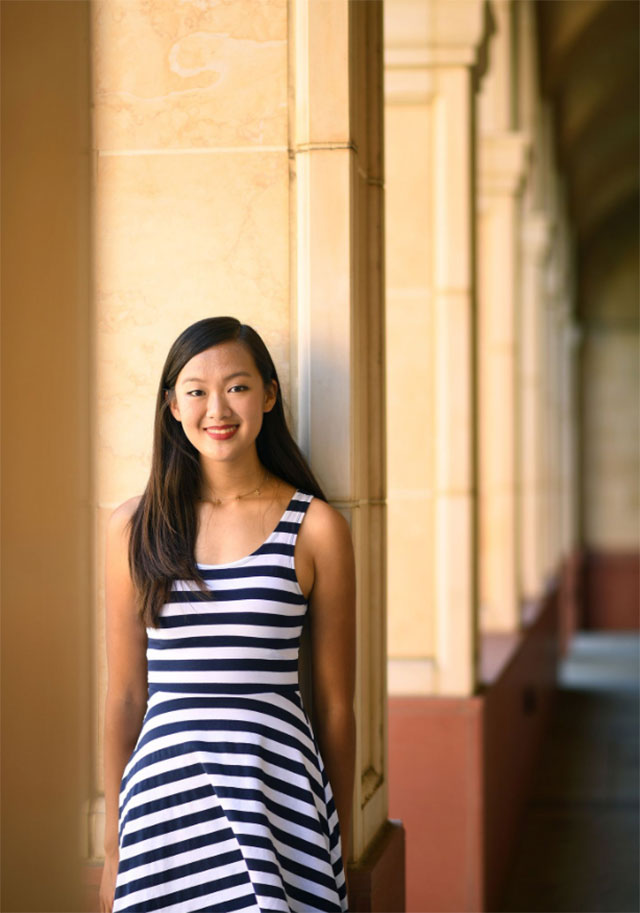 "Yellow" is the first Mandarin song to reach the top of the Spotify Global Viral 50 Charts. How do you feel about the worldwide attention this song received?

Honestly, I was quite shocked at the response the song received. I thought that the song will be pushed into the background by non-Mandarin speakers since they wouldn't understand the words. The success of this song proved that we live in amazing times where technology is helping connect us across cultures. Platforms like Spotify have changed the way music travels, and the fact that people all over the world not only noticed this song in the movie, but also deliberately looked up the song and listened to it on their own time truly touched and humbled me.

My parents unconditionally support my singing, but I think that they are especially proud of this project because I got to sing in Mandarin (both of my parents are first-generation immigrants from China).

How did your family + inner circle react to the news?

My family and friends have been overwhelmingly encouraging and supportive! I am so grateful to have the support system that I do. My parents have probably listened to my song hundreds of times by now. My dad told me he has had the song on repeat during his daily commute to work. My parents unconditionally support my singing, but I think that they are especially proud of this project because I got to sing in Mandarin (both of my parents are first-generation immigrants from China).

Being Asian American, how has your life/career changed since CRA hit theaters?

I truly mean it when I say that this film has shifted my perspective on what it means to be Asian-American. For better or worse, I was always very aware of my Asian-American identity. On one hand, I embraced my identity, celebrated my culture, and felt very lucky to be a part of such a supportive, tight-knit Chinese community in my hometown. But, as much as being Asian was a source of pride, it was also a major source of insecurity for me growing up.

I am very fortunate that I have never had blatant racism directed at me, but being Asian still took a huge toll on my self-confidence. I constantly felt that I was lesser-than because of the color of my skin and told myself that I only belonged on the sidelines of society. I can't really pinpoint why I felt so insecure about being Asian, but it was a real insecurity nonetheless and one that I'm sure many Asian-Americans can relate to in some way.

Perhaps, this was caused by the lack of quality representation of Asian-Americans in media. I truly think that if a film like Crazy Rich Asians had come out when I was in middle school/early high school and struggling the most to find my sense of self, things might have been different and maybe I would have been less shy, less apologetic, and more confident in my own beauty.

Watching this film, seeing faces like my own portrayed in such a vibrant, lovable, relatable, funny, and cool way made me realize that representation has the power to shape a young person's self-image and self-confidence. I have truly never felt prouder to be Asian, and I wish I could go back in time and tell my younger self that she is so wrong to be ashamed of being Asian, so wrong to think she deserves any less attention, respect, or love because she is not white.

I truly think that if a film like Crazy Rich Asians had come out when I was in middle school/early high school and struggling the most to find my sense of self, things might have been different and maybe I would have been less shy, less apologetic, and more confident in my own beauty.

In terms of career, this film made me realize that yes, Asians can star in movies and dominate box offices and play more than just a supporting role in the entertainment industry! Although I am still very torn about whether to pursue biology or music, I am comforted to know that I should not let the color of my skin determine whether or not I will pursue music. 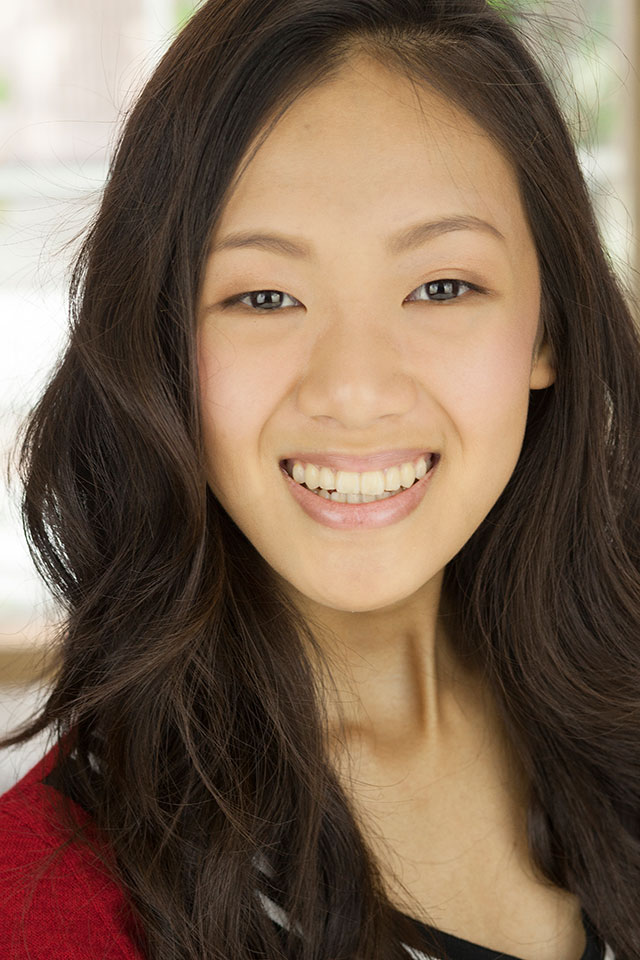 If there's a song you'd like to cover for the CRA sequel, what would it be?

It would be an absolute honor to be included in the sequel! I would love to sing anything, even if it was just a few notes. I think it would be so cool if the music supervisors wanted to write original music for the sequel soundtrack. It would be my dream to contribute my voice to a Crazy Rich Asians original song!

What are your plans after college?

I feel very torn right now about which career path I want to pursue. Ultimately, I am so grateful that, at this point in my life, I can simultaneously explore biology/health care and music—two fields that I am passionate about.

I am currently majoring in biological sciences, minoring in songwriting, and pursuing musical and health care opportunities in and outside of school.