It seems the soon-to-be royal can make a mean chicken adobo.
by Paolo Chua for Townandcountry.ph | Feb 28, 2018
Post a Comment

A video of Meghan Markle speaking in Tagalog has made the rounds, much to the amusement of Filipinos everywhere. In the video, Markle was seen cheerily greeting onlookers during their visit to Edinburgh Castle on February 13. At one point, she met Filipina Jenny Ulay and her husband, who mentioned that it was their anniversary. The soon-to-be royal promptly greeted Ulay and unexpectedly uttered "Salamat po! (Thank you!)" before walking on to greet others.

Markle picked up the phrase while growing up in Los Angeles, a state that boasts the largest number of Asian-Americans. And it seems Markle's Filipino skills also extend to cooking.

In a post on her now-defunct lifestyle blog The Tig, she said: "Growing up in LA, with its melting pot of vast and varied cultures, I was no stranger to the Filipino community. I can whip up a big pot of chicken adobo like it's nobody's business, and you'll occasionally hear me toss out a 'Salamat po' conversationally simply because the culture, vernacular of Tagalog, and insanely delicious food of the Philippines brings back fond memories of my childhood as an Angeleno."

Chicken adobo is the unofficial national dish of the Philippines, and as a self-proclaimed foodie, it's something that Markle recommends for a "heartwarming Sunday brunch." In an article on TODAY posted in 2012, she wrote, "I enjoy making slow-cooked food on Sundays, like Filipino-style chicken adobo. It's so easy—combine garlic, soy (or Bragg Liquid Aminos), vinegar, maybe some lemon, and let the chicken swim in that sauce until it falls off the bone in a Crock-Pot. I have a beautiful Le Creuset that could also do the trick, but the Sunday supper 'Americana' of it all calls for a Crock-Pot. Set it and forget it and serve with brown rice and salad."

Upon further research, we unearthed the Suits actress' recipe for chicken adobo from food blog HungryForever. See it below. 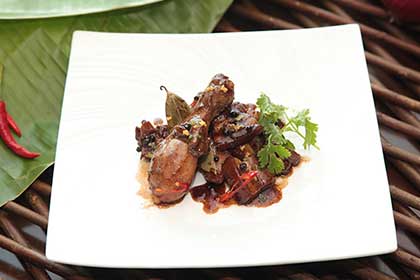 Instructions:
1. Heat the oil in a large skillet on a medium flame.
2. Add the chicken pieces and cook until golden brown in color.
3. Remove the chicken and add onions and garlic to oil.
4. Cook till the onions are brown.
5. Add vinegar, soy sauce, garlic powder, black pepper, and bay leaf.
6. Add the chicken and turn the flame to high and bring the mixture to a boil.
7. Reduce the flame to medium-low, cover the pan and let the dish simmer for about 40 minutes or till the chicken is tender.