The Cosmo Chick's Guide To Bouncing Back From A Crisis 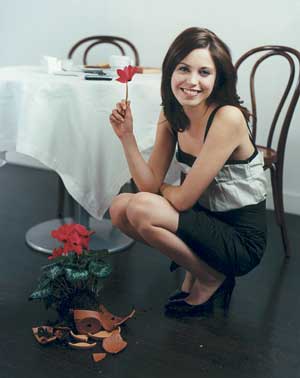 Sometimes you’re just going about your business—working, partying, falling in love—when suddenly, you’re blindsided: You get fired, your guy dumps you, or you go broke. Cosmo tells you how to rebound.

DISASTER 1: You Were Fired

“First of all, don’t go around acting beaten down,” says Caitlyn Friedman, co-author of the new book The Girl’s Guide To Kicking Your Career Into Gear. “Be honest but upbeat. Say, ‘It was disappointing, but here’s what I’m going to do now.’ It’s better to be the person who talks about it than to have it be the elephant in the room.”

Then, face the fact that rejection provides information—so use it. “Think honestly about why you got fired,” advises Bernardo J. Carducci, PhD, professor of psychology at Indiana University Southeast and director of its Shyness Research Institute. “Perhaps there’s a slowdown in your industry overall, but maybe it is something about you. Perhaps you were spending too much time cruising the Internet or your sales were going down.”

This is your chance to figure out whether you actually liked doing that job anyway. (Were your sales down because you were bored stiff by selling radio time? Had you outgrown your position?) “If you can take some emotion out of the situation, you’ll learn a lot,” says Friedman. “For many people, being fired is the best thing that ever happened to them because they use it to think creatively about their career.”

“Firing rarely really happens out of the blue,” says Friedman. In hindsight, the clues are everywhere. If your boss isn’t quite meeting your eye, you feel suddenly left out of the loop on key projects, you got turned down for a promotion, or there is less pressure on you to achieve goals or score big coups, you’d better start staying late…and brushing up your resumé.

And all along the way, adds Friedman, “you should be managing your career—have a five-year plan for yourself.” Even if you’re at a junior level, start meeting people in your industry, attending conferences and events, and building relationships with people in your company who might mentor you. “The bigger your world is,” Friedman says, “the better off you’ll be if you’re fired. A lot of people just figure they are working hard and will be rewarded, but it doesn’t work that way.”

You’re not alone: More than five million Filipinos are bogged down by credit card debt every month, reports Inquirer Research. But, even if credit-card expenses are getting you down, never let them intimidate you, advises David Bach, author of Start Late, Finish Rich. To get back on your feet, Patricia Brennan, a certified financial planner, suggests shifting credit balances to a promotional zero-percent card and finding budget leaks by writing down every peso you spend for a month. And, the little things really count, she adds: Try bringing baon for your lunch, drinking coffee at home rather than buying a daily jumbo cappuccino, and saving your loose change.

Everyone should have an emergency fund that will keep them going for three to six months, says Brennan. So, start putting that aside with your next paycheck. If you’re finding that you can’t pay your credit-card bill each month, put the card in your freezer—literally. “If it’s sitting in a block of ice, that will at least slow you down and give you a chance to rethink before you spend,” she explains.


DISASTER 3: You Were Dumped By The One

There is a fine line between obsessing and reflecting, says New York psychologist Dale Atkins, PhD, author of Sanity Savers: Tips For Women To Live A Balanced Life. “You do need to confront it and feel the emotions, but you need to put a cap on it as well,” says Atkins. She advises giving yourself a specific window of time each day to indulge all the painful thoughts and memories—say, from seven to eight p.m.—and force yourself to let go and think about the bigger picture.

Which should not, for a little while, include hopping into bed with either a handy ex or the next guy who buys you a drink on your next night out. “That kind of quick fix doesn’t feel good for long,” says Atkins.

“Ultimately, you’re going to have to allow yourself to be vulnerable again, and that can’t happen until you’ve gone through the healing process.”

Once you’re semi-rational, begin analyzing your past for destructive patterns you can avoid next time.

Some things in life simply aren’t under your control, and someone falling out of love with you is one of them. But, you can -become a more resilient person in the face of disappointment or heartbreak, says Atkins. Create and sustain a strong circle of supportive friends and family, rather than letting those ties lapse upon getting serious with someone.


DISASTER 4: You Hate Your Career Choice

First question: Do you hate your career choice or simply your job (or your boss)? Think about what really motivates you: Money? Creativity? Autonomy? Make a list of the accomplishments you get the most compliments on. Then, advises Friedman, research your options by joining professional groups (hook up with one through Jobstreet.com), going to conferences, and asking people what they love about their work.

Every six months or so, do a career scan, advises Friedman. How have the past six months been? Where do you want to be next year? Ask yourself: “Where did this idea of being a [fill-in-the-blank] come from?” “Does it feel authentic to me? Do I experience joy in it?” Those internal queries can help you recalibrate sooner rather than later.


DISASTER 5: Your Friend Betrayed You

At this point in your life, your friends are standing in for family, says Atkins, so a betrayal of magnitude can shake your foundation. “It can help to talk about it with other friends who can offer perspective,” says Atkins. “Maybe there’s something going on in her life that you don’t know about…or something about you that she can’t handle.”

Whatever the reasons, dump the revenge fantasies, and just concentrate on whether you want to give her another chance. Is this the first betrayal, or one in a series? Is it a very long-lived friendship that deserves another shot? If you do want to try to repair things, Atkins suggests writing an email along the lines of: “I don’t understand what happened, but I feel hurt. If you want to tell me about it, I’d like to know.”

Don’t put all your friendship eggs in one basket. “You don’t want any one person to be the source of your identity,” says Carducci. Instead, have several close friends in different circles, so if you end up disappointed or hurt by one of them, it isn’t so devastating.


OTHER MAJOR BUMMERS
Solutions to a few more life crises.

You Flunk Out
See if your school has a retention specialist to help you stay enrolled. Most universities have them.

Your Parents Split Up
Try not to think about how sad and difficult dividing the holidays will be, and realize they may be happier now.

You Hate Where You Live
Reframe it as an adventure, and give it a decent shot (dating a nice/hot guy could help). If all else fails, plot your six-month escape plan.