The Truth And Nothing But

Our Quickie Blogger reflects on why it's easier to be straightforward and, sometimes, tactless.
by Holly Eagleson | Oct 4, 2009
Post a Comment
Featured
Up until I reached freshman year in high school, I didn't make a big deal out of white lies, or lying in general. Growing up, I watched people fib about random, silly things, so I found myself also stretching the truth here and there.

That came to a halt when I was 11. (Yes, I was a very young high schooler.) We were at my friend Mia's house when one of the girls called me out on a white lie. I cannot, for the life of me, remember what it was exactly: It was so in-passing and probably an exaggeration of tween proportions, perhaps like how one's little sister would exaggerate, "My mother bought me these sparkly blue shoes and they had real diamonds!" 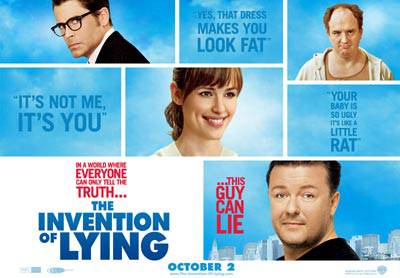 In the new movie, The Invention of Lying, people live in a world where everybody tells the truth.
What I do remember to this day is that our friend Dawn said jokingly, but meaningfully, something to the effect of:

I don't remember her exact words; after all, that was 18 years ago (she may have also pointed out to me that lying was a sin). But I got reminded that lies, no matter how 'small,' were just not right.

From then on I quit lying, cold turkey. Except when I was 13 and told a guy I went to a different school. Other than that, I don't remember a distinct moment wherein I'd purposely spoken an untruth. Or if I did, it was probably one of those things when you're filling out a form and it asks you for your annual income and you don't really know so you just round off some number off the top of your head; or if a creepy person asks what your name is and you say something else. That kind of stuff.

In the years that followed, I became this straightforward--at times to the point of tactless--frank, and transparent individual. Some of my teachers also called me out on this. My first boss nicknamed me The Truth Serum.

It's true, though (and for sure you've already heard this before): The truth is just easier to remember than a string of lies.