Are You Turning Your Boyfriend Into a Girly Man?

Bringing him along for spa days and mall runs sounds fun and harmless enough, but treating your guy like a chick could mess with your relationship.
Jan 23, 2013
Post a Comment

Picture this: You and your guy meet at the gym, where you talk him into joining an aerobics class with you. Then, you head home together, switch on your telenovelas, and order in from the vegetarian place you like (after months of convincing, he’s finally conceded to give up meat). Sounds like a pretty normal night. In fact, sounds like a pretty great night.

But while those things—aerobics, kontrabidas, and low-cal dishes—seem innocuous in small doses, when you add them all together, you’re submitting your guy to a whole lot of girliness. “A growing number of women are behaving as though their guy is one of their girlfriends, and more men are agreeing to partake in traditionally feminine activities,” says Christopher Blazina, PhD, author of The Secret Lives of Men. “The lines between the genders are becoming increasingly blurred.”

To some degree, this is a good thing—we obviously don’t want to revert to old-school gender stereotypes—but there’s a point where it goes too far, and that’s when it’ll bite you in the ass. A recent Stony Brook University study found that couples who reported “romantic love” were more satisfied in their relationship than couples who said they had a friendship-like love with their partner. We took a closer look at the growing trend of females “chick-ifying” their boyfriends, and have advice on what to do about it. 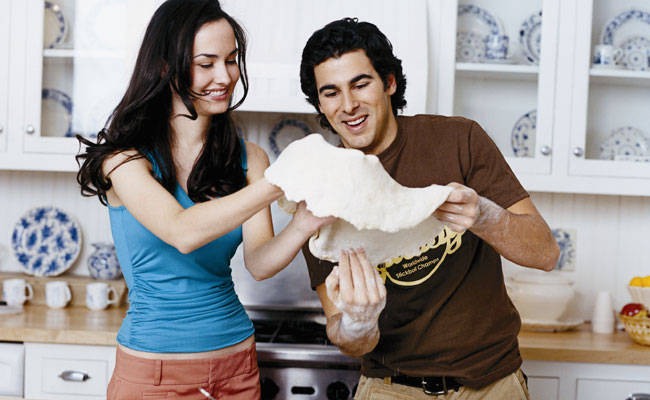 First, Why Would You Want to Act Like Your BF or Husband is One Of the Girls Anyway?
Your pull to do girly things with him stems from experiences with your female friends. “Women are intimate with their close friends; we share everything,” says JoAnn Magdoff, PhD, a psychotherapist in New York. “So, your instinct is to do with your partner the stuff you enjoy doing with friends. Since they’re both deep relationships, it’s understandable to approach them the same way.” On top of that, couples who are BFFs are considered the epitome of a perfect twosome these days. The sentiment “He’s not only the love of my life, but he’s also my best friend” is tossed around freely.

Both lines of thinking drive us to want to blend all our interests with our guy. You’re into Pilates? He should give it a shot, too. You love romantic French movies? He should see them with you. “People expect more out of relationships now than in the past,” says Ian Kerner, PhD, author of Passionista. “We want someone we can connect with on every level.”

Of course, wanting a solid connection is valid, but there’s a major difference between the type of close relationship you should have with a girl and the one you should have with your guy (besides the sex). With girls, you bond over everyday things, such as clothes, movies, and hobbies. With your guy, those don’t matter so much. “Rather, it’s about being on the same page when it comes to the big picture,” Magdoff says. Your future plans should match up—like you both want to work abroad for a bit before settling down. And, you should share the same fundamental values, whether you are ambitious city people or crave a laidback lifestyle.

So, Why the Hell Does He Go Along with It?
A few components are at play. For one, there’s a decent chance that your guy doesn’t notice what’s happening because it’s so subtle, according to Blazina. Asking him “Does my tummy stick out in this top?” when you’re getting dressed and treating him to lunch at the adorable little café you discovered instead of the burger place don’t seem like a big deal. It’s the cumulative effect that matters.

Another factor: “Men comply to make you happy, particularly in the beginning of a relationship,” Magdoff says. These days, guys are more apt to try to please you this way, because women are likelier to suggest the plans. “Women often take on the role of ‘social director’ in a couple,” explains Lana Holstein, MD, founder of Intimacy Associates. “Men go along with your ideas since it’s the path of least resistance, and they don’t want to risk a disagreement or disappointing you.” Meaning, when you propose meeting up with the girls for Sunday brunch, it’s easier for him to simply say “sure.”

Adding to that, guys might think they won’t get to see you unless they agree to participate in these girly endeavors. “Women are less willing to change their lives when a guy appears on the scene than they were in the past,” Dr. Holstein says. “They don’t want to alter their routine because they’re in a relationship.” You have a busy life and aren’t about to cut back on the things you loved when you were single. So rather than carve out time for him by dropping some of those activities, he just joins you. All that takes a toll.

The Long-Term Damage
Your guy’s testosterone level nose-dives, for one. Imagine the flip side: What if he wanted you to hang at sports bars, throwing back beers in a rumpled tee? You’d feel like your inner girl had been hijacked. For him, receiving the girly treatment is emasculating, even if he acts like he’s cool with it. Sure, some guys appreciate going shopping with a girlfriend who will help him pick out nice clothes and legitimately enjoy listening to your Ke$ha album in the car. But, that’s not the case for many men. “You can’t assume everything’s fine,” Magdoff warns. “There will come a breaking point when he’ll start to resent you.”

In addition, sharing every little thing leads to a loss of mystery, so you’ll be headed down the wrong fork in the road…onto the buddy path instead of the romance path. “You need to maintain some distance. Femininity is mysterious and enticing to men,” Dr. Holstein explains. “The differences between you are what create that electric current, that magnetic pull.” In other words, too much familiarity is a threat to love, agrees Kerner: “When your lives are superintertwined, the intrigue disappears.” No intrigue? No passion.

Here’s How to Reverse Course
It’s possible to get back on track and restore his guyness. First, separate pa-girl pastimes from dude-oriented stuff. “Use your instincts and set boundaries,” Magdoff says. If your guy’s joining you in an activity and it makes you feel weird, or you’ve stopped thinking about him as sexually as you used to, cut him off from the chick flicks and cupcake-baking. Do more activities your man would be interested in doing.

Plus, while you shouldn’t give up the things you enjoyed when you were a free agent, you need to make room in your life for your guy, which means sometimes choosing to hang out with him instead of going to the martini ladies-special  night or the shoe sale.

It’s also important to pursue your own interests solo. “It may sound counterintuitive, but having a strong sense of individuality will actually make you closer as a couple,” Kerner says. “Remember, mystery keeps things compelling and intense.” So, start detaching from him a little—sign up for a cooking class, take a vacation with family instead of with him, or plan a weekly girls’ get-together.

Finally, develop new rituals for just the two of you, instead of drawing him into activities you already do. According to Magdoff, whether it’s a bike ride on Sunday afternoons or camping out in Zambales a few times a year, this will cement that you have a unique connection. The result: a tight, strong, sexy bond that will stay exciting.