Talk So He'll Listen (And Listen So He'll Talk)
Relationships

Talk So He'll Listen (And Listen So He'll Talk) 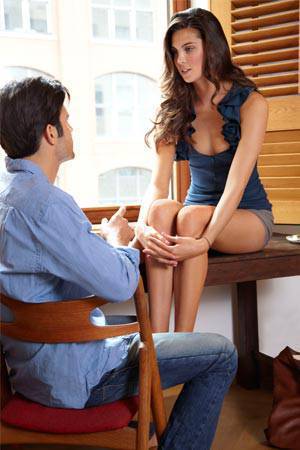 He knows your sense of humor, your biggest pet peeves, and the noises you make when you’re turned on, so it’s only logical you’d communicate better with your man than you do with a random person at the supermarket. But, a new study has found that that’s not the case. Turns out, the closer you are with your guy, the harder it may be to speak so you really “get” each other. Sounds insane at first, but it actually makes sense if you think about it this way: Imagine you have to give driving instructions to an out-of-towner.

Chances are, you’d go to lengths to provide detailed directions to the visitor so she is clear on where she is headed. But if you were giving them to your guy, you may use phrases like “It’s two blocks down from that sandwich place we went to that time.” You think he must know what you’re talking about, but he may wind up pretty confused (and lost) if he’s picturing a restaurant in a different part of the city that you’ve also been to. Researchers call this the closeness-communication bias—the closer two people are, the more they overestimate their communication skills with each other and consequently rely on shortcuts and assumptions when talking. And since you and your guy chat about a heck of a lot more than driving directions, it leaves you open to some pretty big misunderstandings, which can ultimately erode your union.

According to the research, couples make three big communication mistakes that lead to these crossed-wires moments. “If you work on them, it can make your relationship much stronger,” says psychologist Ken Savitsky, PhD, a professor of psychology at Williams College who worked on the study. Read on to learn the missteps you may be committing and get the talking tips you need to ensure your love stays solid.

One of the first things Savitsky noticed when he started the study was how sure people were that their partner always understood what they were trying to get across, no matter how clear or unclear they were being. So, he concocted an experiment to gauge the reality. He had women say the phrase “It’s hot in here”—which could mean anything from the temperature of the room to a flirtatious come-on—to strangers and then to their significant other. In the end, the significant others guessed the intention incorrectly just as often as the strangers did.

To demonstrate the relevance of the finding, here’s a common relationship scenario: Your boyfriend is going out with the boys, and you ask when he’ll be home. He says, “Not too late.” Fast-forward to midnight and you’re pissed, worried, or both because he’s not back and you haven’t heard from him. What this all comes down to is different perceptions: In his mind, rolling in a little after midnight equates to an early night, whereas you define it as the opposite. If he had just said he’d be home before one a.m., you wouldn’t have gotten upset, but because he was ambiguous, you both walked away with completely different interpretations of the evening ahead.

“People in relationships constantly mishear each other because they are vague,” says James Cordova, PhD, associate professor of psychology at Clark University and author of The Marriage Checkup. The fix is simple as long as you stay tuned in to that kind of blurry language. Anytime your guy says something that could be open to interpretation, ask him to spell it out. So for the example above, if he says he won’t be out late, say you’d love a ballpark idea of when you’ll see him. “If you start asking him to be specific regularly, he’ll naturally start doing it up front because he’ll start realizing you want or need that information,” says Barton Goldsmith, PhD, author of Emotional Fitness for Intimacy. And, be cognizant of spelling out your own plans and thoughts with him, too. If you want to chill out all weekend, instead of saying “I just want to relax,” say “I’d like to stay in and order takeout tonight.” The more you both get used to being ultra-clear with each other, the less these misunderstandings will pop up.

Another typical couples communication habit the research uncovered is believing your partner is thinking the same thing you are. There’s actually a scientific term for it: self-other merging. Boiled down, it means that after you’ve been with someone for a decent length of time and gotten to know him well, you start to presume that you share the same thoughts. But according to the study, you aren’t on the same page as often as you’d expect, and that can make a convo turn ugly very quickly.

Consider this example of how the phenomenon can manifest itself: Maybe you’ve been eating a little less healthy than usual and aren’t feeling great about it. Over dinner one night, your boyfriend or husband asks if you went to the gym that morning. You are supersensitive to the question and jump to the conclusion that what he really means is that you should have gone, since that’s what you’ve been thinking. In reality, he was just wondering if they had this cool new machine he recently tried at his own club.

Another way it plays out is when something you say hits a nerve regarding a matter you’ve scuffled over in the past. Say you had a fight a while back about his inertia when it came to planning dates. You resolved it, and months later, you ask what he wants to do Friday night. You were simply inquiring, but he reads it as your accusing him of falling back on old habits and not taking initiative.  To avoid a bad situation, lightheartedly ask him what he means anytime you feel yourself starting to play mind reader. Simply saying “Oh, why did you ask?” will help clarify without the convo escalating to an argument, suggests Cordova.

And since you have no idea what might trigger his own insecurities, try not to become defensive if you do end up hitting a sore spot. “All people in relationships unintentionally hurt their partner’s feelings at one point or another,” says John Buri, PhD, professor of psychology at the University of Saint Thomas and author of How To Love Your Wife. “But, healthy couples learn to defuse the situation before it becomes a fight.” If your guy gets prickly when you ask if he’s walked the dog, suggesting you head out together will help him realize that you didn’t intend for the question to be a passive-aggressive dig and that he can take your comments at face value.

In Savitsky’s experiments, he had all the participants face away from one another—a factor that made them dependent on verbal communication. But in the real world, we also talk through eye contact, gestures, and facial expressions, all of which help your partner interpret what you mean, both correctly and incorrectly.

“It became apparent while conducting the study that physical language and facial cues are essential in everyday conversation,” says Savitsky. And, sending mixed messages with your body and your words is a big couples crime. Why? Because you two are so close, you get more casual in your movements (like turning your back to do the dishes when he’s trying to make a point), and that can lead to relationship strife.

Let’s say you’re trying to explain to your guy that you’d like to be a bit cleaner around your place, meaning both of you. “Even when your voice is calm, if you’re standing with your hands on your hips or pacing the room as you talk, he’s going to take it as a scolding and tune you out because those kinds of gestures broadcast a ‘You’re in trouble’ message,” says body-language expert Janine Driver, author of You Say More Than You Think. “But if you keep your arms at your side and your face relaxed, he’ll see that you’re actually trying to have a discussion with him, and he’ll be more likely to hear you.”

To avoid causing confusion, be aware of any discrepancy between your body and your words. And if you’re trying to get him to really open up about something, like family drama or work stuff, being extra hands-on while talking will help. “Men have to feel close to engage in an emotional or revealing discussion,” explains Steven Stosny, PhD, co-author of How To Improve Your Marriage Without Talking About It.

“And it’s been found that guys are more bonded to you when they are being touched, on the arm, the knee, wherever feels natural.” On the flip side, realize that your man is talking to you with his body too, sometimes more than his words. If you trust those messages, you two will forge a stronger link in the end.