And they’re not makeup or other daily essentials. Find out what this French-Filipino model and makeup artist carries in that HUGE bag.
by Nora Hizon | Jan 7, 2010
Post a Comment 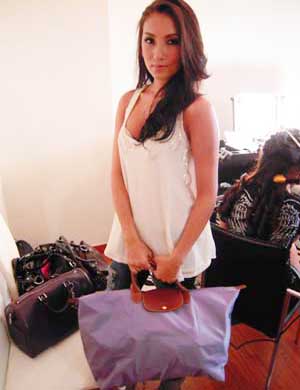 We promised yesterday that we’ll reveal the items inside the bags of the lovely ladies who were at swoon-worthy singer Christian Bautista’s music video shoot for his version of Jose Mari Chan’s “Beautiful Girls.” We’ve already featured the contents of Anne Curtis’ Goyard bag. Now we move on to the second gal: Solenn Heusaff.

Solenn, looking oh-so-fresh in her white top as she holds a cup of frozen yogurt while shooting a scene with Christian, is definitely perfect for the video, which features some of the country’s most beautiful celebs, which also includes Angel Locsin and Georgina Wilson. Anyone who saw this French-Filipino model will be instantly charmed—just one look at those tantalizing eyes is enough. A makeup artist for Make Up Forever Paris, an assistant designer for Lulu Tan Gan, and a model for clothing brand Penshoppe (yes, she’s that sultry beauty in those huge billboards), Solenn really gives importance to her passion for art and fashion.

Incidentally, when Cosmo asked her if we can raid her lavender Longchamp Le Pliage (in photo), she told us it only contains two major items—only the things she needed for the shoot: money and shoes! Specifically, a P1,000 bill and, well, loads and loads of nothing else but shoes (which she opted not to show us). We have to say, we don't normally find that inside other celebs' bags!