First Seen In Cosmo.ph: What Bea Alonzo Carries In Her YSL Purse

For our first What's In My Bag? feature this year, we're giving you your FIRST LOOK at what the five-time Cosmo cover girl carries in her designer purse.
by CJ de los Santos | Jan 3, 2012
Post a Comment
Featured 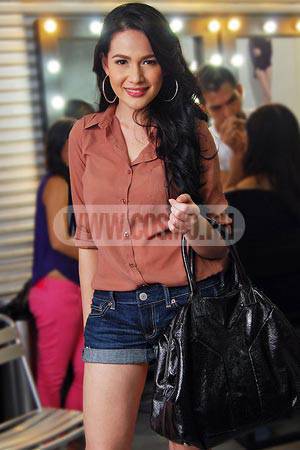 The future looks bright for Bea Alonzo, who is entering 2012 with a new man by her side (actor and former Cosmo Man On Fire Zanjoe Marudo) and a hotter bod', which she happily flaunted on our fun and fresh January cover. Since 2006, Bea has been on four Cosmo covers, and now she's back looking better than ever for her fifth!

On the day of her Cosmo cover shoot, the 24-year-old actress arrived at the Edge of Light Studios in Quezon City wearing a button-down top and leg-baring denim shorts, accessorized with hoop earrings and a large Yves Saint Laurent tote bag--completing her effortlessly chic ensemble. She previously told us that she started collecting bags in 2007, but we never got the chance to peer inside any of her fab designer purses--until now.

After we wrapped up her shoot, Bea opened up her bag to Cosmo.ph for the first time and showed us the contents, which include her favorite cosmetics--like a lipstick from her own Colour Collection line--and a gift from her friend Shaina Magdayao.

Launch the gallery to see the items she brought to the shoot and stay tuned for behind-the-scenes photos and videos, soon!


Grab a copy of Cosmopolitan Philippines' January 2012 issue with Bea Alonzo on the cover--in stands now!