Meet the face behind the styles of the country's hottest--and most powerful--names. Fun, fearless celeb stylist Liz Uy talks about her passion for fashion.
by CJ de los Santos | May 9, 2011
Post a Comment 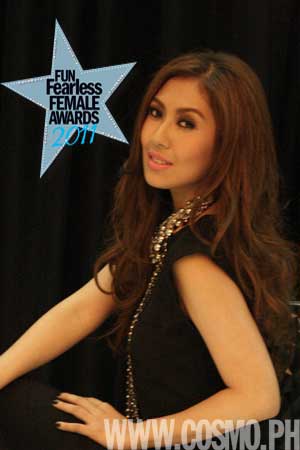 Mark Twain famously observed, "Clothes make the man." As we know, girls also express their own individual styles every time they opens their closets. But for in-demand stars who grace our magazines and TV screens—and even personalities in government—there is one woman whom they turn to for guidance in making the clothes their own.

Liz Uy has worked behind the scenes of the fashion industry for years. The 29-year-old is Preview Magazine's fashion editor-at-large, who made the headlines when she styled President Noynoy Aquino last year, from his election campaign all the way up to the first few months of his presidency. The fashionista is an expert at piecing together the appropriate outfits for any occasion, and the most influential celebs (such as Kris Aquino, ex-boyfriend John Lloyd Cruz, and Bea Alonzo, among others) entrust their style to her fashion genius.

We caught up with Liz at the Fun, Fearless Female Awards shoot and talked about what it's like to work in the fashion industry. Watch for the video coverage and interview on CosmoTV soon!

Launch the gallery to view behind-the-scenes photos of Liz's shoot, and look out for her What's In My Bag? feature tomorrow!