Cosmo lists six reasons you should definitely join the Celebrity Dating Game on February 10, at 3PM, and win this hot actor’s heart!
by Cheekie Albay | Feb 9, 2010
Post a Comment 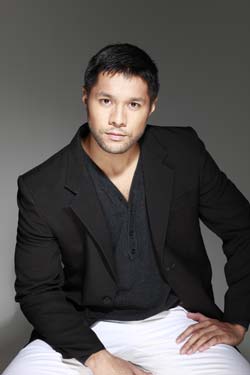 We’ve got a new crush over here at the Cosmo.ph HQ, and it’s actor-model Victor Aliwalas! Now that the US-born and bred hunk has wrapped up work on GMA-7’s Kaya Kong Abutin Ang Langit, he’s free to romance you on Valentine’s Day!

In Cosmo Chat’s Celebrity Dating Game tomorrow, February 10, from 3PM to 4PM, Victor will pick one lucky Cosmo chatter to go on a V-Day date with him on Friday, February 12. We’re telling you, this guy’s a major catch!

The 26-year-old looker was recently hailed the male Model Star Awardee for the Philippines at the 2010 Asia Model Festival Awards held in Seoul, Korea. Victor also hosts an online show called myFitness under PLDT MyDSL’s Watchpad, where he talks about keeping fit.

But a rockin’ bod is not all there is to Victor! And even though he was born and raised in Ohio, this cutie is 100% Pinoy, boasting of Kapampangan blood on his dad's side and Bicolano on his mom's side. In fact, it doesn't matter to him whether you're American or Pinay—"Wherever you are, it doesn't matter. [Your personality] depends on the upbringing," Victor says. Read on for six other reasons we think you should score that date with him.

1. He might be a celeb, but he’s really just a regular dude.

“It’s funny because my friends back in the States saw the link to your website. They were like, ‘Win a date with you? Pa’no ‘yun?! How did you end up doing this?’ Talagang iba ang buhay ko [in the States]. To all the girls out there, there’s no need to be intimidated. I’m just a normal guy, just a regular guy. Minsan maarte, minsan hindi. Depende sa lugar (laughs). Of course everybody thinks sa unang tingin, ‘O, artista pala siya, siguro mayabang ‘yan.’ Pero hindi totoo ‘yan.”

2. Victor believes that the key to a great date is great conversation.

Besides humor, which he thinks is very important on a first date, Victor believes that the biggest turn-on is great conversation. “If we can relate [to each other] on a lot of topics, and if she really grabs my intellectual interests, that’s a good thing. If the conversation’s good, of course it’s going to make me want to call her more or text her more.”

3. Even if you mess up on your date, he won’t hold it against you.

“You want to give people the benefit of the doubt. Minsan sa first date people are nervous,” he says.

4. He digs girls who are polite.

“If they’re rude to the service people it shows a lot about their personality. You have to observe how they act around other people. If they’re not polite, pangit ‘yun. That’s a turn-off. How would she treat your friends or your family if that’s her attitude? I think being polite is a very important trait. Etiquette is also important, the way they carry themselves. But the most important thing is to be themselves."

5. He assures you that you shouldn’t worry about tripping on your English with him.

"Ingglisero ako diba? Medyo baluktot ang Tagalog ko. Even if the girl speaks straight Tagalog, okay lang sa akin ‘yun ‘cause she can help me. I can learn from that. Kahit English, kahit Tagalog, we can teach each other."

6. He reads and gives major props to Cosmo! Hurrah!

“Cosmo is a big part of pop culture. For some girls, it’s their bible. So of course I’m honored [to be part of its website],” Victor says. He even admits that he might’ve picked up a Cosmo issue or two himself! “It gives you a little insight into how a girl thinks,” he continues. “Guys don’t want to admit it, but sometimes guys have to read Cosmo, too!”

If you want to win this actor/model/all-around hunk’s heart, log on to Cosmo Chat tomorrow, February 10, from 3PM to 4PM, to win a date with him, not to mention a makeover and a date outfit! Be sure you’re a registered member and you’re logged into your account when you enter the chatroom! (If you’re not yet a member, you may register here.)

“I’ll prepare some questions for Wednesday. This is a fun experience and I hope to make Valentine’s special for somebody,” Victor says.

Sigh. Wouldn’t you just die to be that somebody?