All The Boys Anne Curtis Has Loved Before

There has always been this wild fascination with Anne Curtis, especially when it comes to her love life.  The once super public superstar (Y’all remember her post-breakup interviews on The Buzz, amiright?) has become notoriously private when talking about her long-time beau Erwan Heussaff.

During a recent guest appearance on Gandang Gabi Vice, Anne, along with her sister Jasmine Curtis-Smith, took a trip down memory lane and revisited her past with her many famous ex-lovers.

So here we are, giving you the Anne Curtis Dating Map (with references from sis Jas, THANK YOU) starting from her first serious teenage boyfriend up to her current and most private relationship.

Ah, young love! Anne was 16 years old when Oyo Boy became her boyfriend. The two were both teen stars on GMA-7 then. Their relationship lasted for two years. On the recent GGV ep, Jasmine revealed that she was closest to him among her ate’s boyfriends because he was like a kuya to her. Their mom, however, wasn’t really in favor of their relationship, saying, “Sakit ng ulo ni mama si kuya Oyo. Kasi first boyfriend ni ate. So si ate noon, pasaway din kay mama. Siyempre ayaw ni mama na magka-boyfriend si ate noon, or lumalabas sila, magde-date.”

Anne and Richard Gutierrez were both rising teen stars of the Kapuso network when they got into a public relationship in 2004. They dated for only a year. 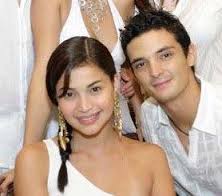 Little is known about Anne’s ex Paolo Araneta. All we know is they dated for two years and split in 2006. And according to Jasmine, he’s the most ‘galante’ of all her ate’s exes.

Ooooh, Sam. *sighs* Yup, the on-and-off-again power couple met on set of their ABS-CBN teleserye Maging Sino Ka Man in 2006 where ~*sparks*~ (lots of them) ignited between the two. Sam was in a tumultuous 4-year relationship with Anne, whom he has described as his ‘greatest love.’ Among Anne’s exes, Jasmine says Sam was the one her ate cried the most over. We know, Anne. We know.

Anne’s long-term relationship with restaurateur Erwan has been a quiet one compared to her ex-BFs. We see them conquer the world together and satisfy their foodie cravings on their (wander)lust-worthy IG posts, and greet each other with the occasional PDA shoutouts on their respective birthdays. On November 12, 2017, Anne and Erwan tied the knot surrounded by their closest friends and family at the picturesque mountains of Queenstown, New Zealand.