Andi channels old-school Hollywood glamour in Cosmo this month. Get an exclusive insider's look at her shoot!
by Jing Lejano | Sep 8, 2010
Post a Comment
Featured

Andi Eigenmann's looking glam on the cover of Cosmo this month. She's all decked out in vivid, va-va-voom red as she channels old-school, classic Hollywood. It's a look that might not be very "her" (she's young and young at heart; a girl of simpler tastes), but one that's very fitting for her showbiz royalty status.

If you've been living under a rock, Andi's a member of one of the biggest showbiz families in the Philippines. Her dad, Mark Gil; her mom, Jaclyn Jose; her kuya Sid Lucero (who she says she looks up to, "but don't tell anyone"); and her sister Maxene are all active in the entertainment industry. We haven't even mentioned her many other celeb relatives. (The incomparable Cherie Gil, anyone?) Philippine showbiz can't be without the Eigenmanns.

Naturally, Andi's already making a name for herself in the business. Her hit teleserye Agua Bendita (which co-starred gorgeous racer Matteo Guidicelli) just concluded, and already this talented young actress has movies in the works. Her star is definitely on the rise. 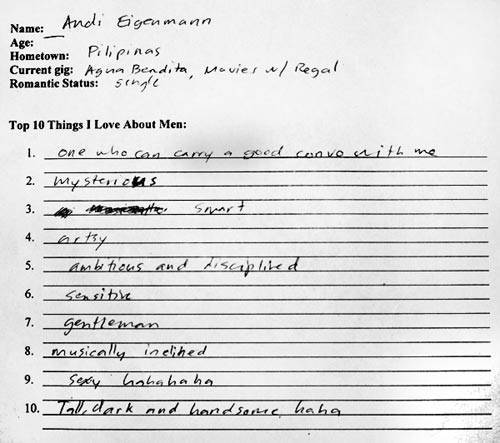 Click through to the Gallery below to check out behind-the-scenes photos of Andi's cover shoot. Don't forget to watch for our exclusive video interview!


Know more about cover girl Andi Eigenmann's rise to success when you grab the September issue of Cosmopolitan Magazine. It also has the Cosmo Men supplement--with Sam Milby on the cover--in stands now!