You're in for one heck of an emotional roller coaster ride. 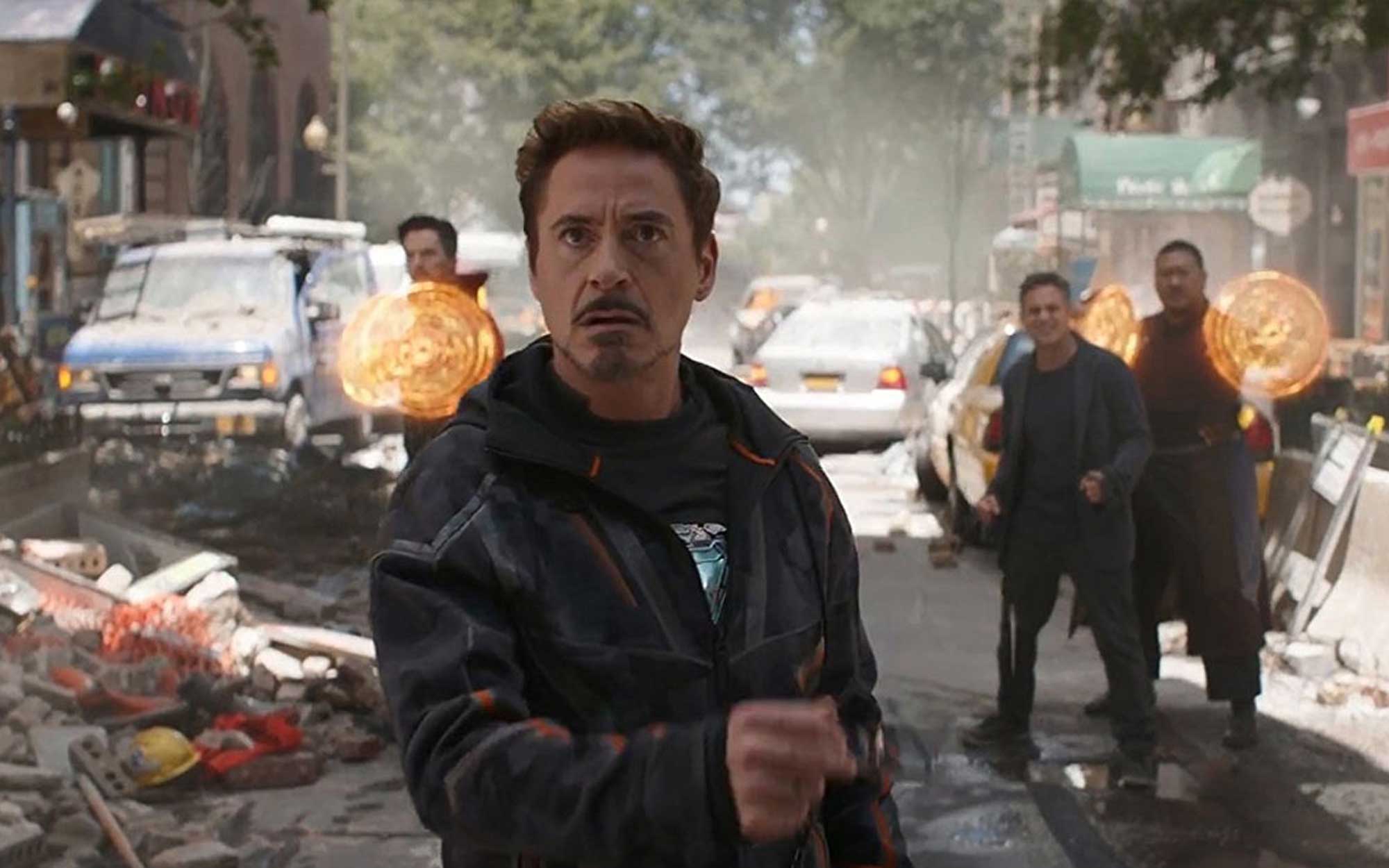 After biding his time on the sidelines, Thanos finally takes action as he scours the galaxy to collect the Infinity Stones with a little help from his friends/minions. But what has happened to the elusive *bling*? The Space Stone or Tesseract is currently in the possession of Loki, who was shown swiping it during a Thor: Ragnarok post-credits scene. It has the power of travel and can produce gateways across the universe. The Mind Stone, which can control, well, minds and increases brain power, is currently smack dab on Vision's head. The Reality Stone or Aether is with the Collector as Thor: The Dark World has shown. The Power Stone, which deals high damage, is currently in the possession of Nova Corps from the first Guardians of the Galaxy movie. The Time Stone or Eye of Agamotto is inside Doctor Strange's necklace. As for the final orb to complete the jewelry set, the Soul Stone, you'll just have to watch and find out.

With the bad guy being extra AF by making such a scene by stomping around and demanding his gems, it's more than enough ruckus to alert the who's who of the Marvel Cinematic Universe. It's the superhero social event of the decade!

Expect an emotional beatdown of epic proportions because there's drama everywhere! Fortunately, it's balanced out by the adrenaline-pumping action and the beefcake buffet that is a rugged Captain America bringing out the lumbersexual in you, the Winter Soldier performing manual labor, Black Panther's/King T'Challa's smoldering gaze, and Thor's entire being. Even Gamora recognizes the fine specimen that is the God of Thunder.

He's been busy the past few years with one Marvel film after another with his last one being a mentor figure to Spidey in Spider-Man: Homecoming.

We've seen him rock it in his origin film and now we're waiting with bated breath for BBC's new Sherlock season to finally air.

Chris made our ovaries explode as he took care of a brainy kid in Gifted. #YesDaddy

She played Major Mira Killian in 2017's Ghost in the Shell and showcased her comedic chops in Rough Night.

Tom was Peter Parker personified as he rocked his role in Spider-Man: Homecoming.

Mark Ruffalo as The Hulk

He had a bigger in his perma-Hulk mode in Thor: Ragnarok. We didn't know we needed his tandem with Thor until we saw that film.

While we're still weeping from his divorce from Anna Faris, it looks like he's been busy with the sequel Jurassic World: Fallen Kingdom.

The geeky gal reprised her role as Nyota Uhura in Star Trek Beyond and voiced a character in My Little Pony: The Movie.

Aside from being known as the God of Thunder, now people recognize him as the hunky secretary in the Ghostbusters reboot. (Best. casting. decision. ever.)

Paul has the privilege of starring in two blockbuster Disney franchises as he's got a role in the upcoming Solo: A Star Wars Story.

She played the role of a social media influencer being stalked by a fan in Ingrid Goes West. She also had unbridled sexual tension with Vision during the events of Captain America: Civil War.

She burst onto the scene as the adorbs Mantis in Guardians of the Galaxy Vol. 2 but also co-starred with Scarlet Witch Elizabeth Olsen in Ingrid Goes West.

In a hilarious turn of events, he was thrown at baddies in Thor: Ragnarok. He also starred with Captain Marvel's Brie Larson in Kong: Skull Island.

At least half of the Easter Eggs feature his voice so he's one of the most frequent baddies in the MCU. He was a sharp-talking producer in Hail, Caesar, too! And he's starring in another Marvel movie as Cable in Deadpool 2.

We want to see him banter with Ant-Man again like in Captain America: Civil War.

It was odd seeing the good-looking actor portray a creepy redneck role in I, Tonya (aka the movie starring Bucky and Harley).

We last saw her as a less hostile Nebula in Guardians of the Galaxy Vol. 2 and as the cool chick Ruby Roundhouse in Jumanji: Welcome to the Jungle.

She was a freaking boss earlier this year in Black Panther and still kicking ass on The Walking Dead.

The actor sits on the director's chair for the upcoming musical, A Star Is Born where he stars alongside mother monster herself, Lady Gaga.

We're hella worried how Rhodey has been since the events of Captain America: Civil War.

Dave Batista as Drax The Destroyer

We high-key loved the friendship between Drax and Mantis in Guardians of the Galaxy Vol. 2.

Of course, we know him best as Tyrion Lannister (who's still alive and kicking after the massacre that is Game of Thrones).

We last saw him burning rubber as Dominic Toretto in The Fate of the Furious.

Like me, I'm sure Marvel fans are going to need to take a seat in order to process everything that took place. Avengers: Infinity War is the end result of Marvel Studios spending a decade laying down the groundwork with origin stories, crossover sequels, Stan Lee cameos, and Easter Eggs. This is not a fandom fling, folks! This is the franchise equivalent of the guy who is patient enough to take things slow and not rush into things. He's willing to hunker down and make a long-term commitment to you. And all that effort really pays off in this crossover event because I ended up getting emotionally attached to each and every character like they were family and friends (maybe an imaginary beau even) that I grew up with.

Seeing this rag-tag bunch of heroes and comic reliefs interacting with each other feels like witnessing a very entertaining reunion.

There are small snippets of triumph that made me whoop and clap from my seat. Some of my favorite scenes feature the female heroes getting the spotlight during the intense action sequences. It's the epitome of women getting shit done. It will make you scream, "YASSSS QUEENS!" and leave you wishing for more scenes.

Knowing full well that most fans will similarly cling to certain favorite characters, Infinity War snatches the ones you know and love most, and leaves you in the dust with a crippling loss. While I was stuck weeping for one of the heroes' dire circumstances, I was hit with another feels train. It's A Series of Unfortunate Events with a lot more spandex!

For me, what the most surprising aspect of the film was the focus on Thanos as a character. I was ready for another cardboard cutout villain, throwing widescale tantrums until he got his way. But the purple giant was surprisingly pensive—you could even say he was a bit of a softboi. The movie touches a bit of his backstory and motivations, his capability to care. In a way, he's trying to fulfill his purpose by visiting different places in his own twisted version of Eat, Pray, Love. Yeah, it sounds pretty odd but he wouldn't be displaced in a millennial road trip flick.

I advise you not to drink too much soda since this is gonna be a looong ride, like, highway levels. You simply cannot miss even a single scene! Keep in mind that the movie utilizes every minute to give exposure to each and every MCU character. And after the movie is over, don't forget to breathe again and calm down your rapidly beating heart. It's a brave and bold undertaking that will turn newbie and hardcore fan expectations upside down and inside out. But don't forget to wait out the credits scene for a hopeful note that will make you root for the heroes more than ever. Since it's the first part of a duology, don't get your hopes too high for closure. Just know that all the negative feels will help make the eventual victorious clapback even sweeter. Yes, it sounds a bit bleak but know that most Marvel fans will share your pain. Hence, all the online support group chats popping up since the movie premiered.

"I've been immersed in Marvel lore since I was barely a toddler as the boys in my family were avid comic book collectors. I didn't realize how invested I was in these comic book superheroes until I finally met them "in person" on the big screen.

For the most part, I was 50/50 with how the movie would turn out based on two factors: knowing the general key points in the comic book storyline and my familiarity with sci-fi stories—particularly time travel and altering realities. However, prior knowledge didn't prevent me from enjoying the film or having emotional outbursts toward the characters' fates. The connections were made throughout ten fulfilling years of MCU storytelling and a lifetime's worth of reading up on their adventures.

Infinity War validates that proper storytelling and investing in years of building the proper foundations will make for a successful film. Whether it was faithful to the comics or not, we still went through wave after wave of emotional tsunamis. At the end of the day (or film), we find ourselves all on the same page of "Holy shit," and are itching to know what happens next." —Mar

First of all, I highly recommend that you watch it more than once. Why? Because the endless assault of emotional anguish and despair will leave you dazed and shookt for days. For optimal enjoyment, it's best viewed by people primed with prior MCU knowledge or at least those who've seen the movies featuring the ubiquitous stones.

This is perfect to watch with your childhood/high school barkada whom you've gone through thick and thin with—just like the MCU franchise. Also, families with kids who grew up aspiring to become Marvel's big screen superheroes. You just really need a solid foundation of MCU know-how and you will fully appreciate Infinity War. Just watch it with every possible social circle you have like your colleagues, cousins, orgmates, and BFFs. You're going to need all the emotional support you're gonna get. Maybe go on an Avenger: Infinity War date since it's gonna give you more than enough reason to snuggle up to your companion on more than one occasion. They can be your shoulder to cry on.