Netizens were quick to react to a photo posted by Pinoy Big Brother alumni Marco Gallo with Juliana Gomez, the daughter of Richard Gomez and Lucy Torres. In a now-deleted Instagram post, Marco and Juliana were snapped locked in a sweet embrace. Marco reportedly captioned the photo with, "There's no explanation to love." This gave rise to speculations of a blossoming relationship between the two.

Marco has other posts with Juliana on his IG account. "So emhh, what's going on," he wrote in a photo of the two of them goofing around in front of the camera. 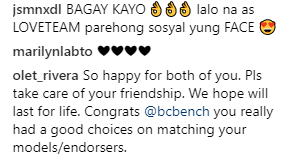 The two young celebrities worked together on a project for Bench's summer campaign that highlighted the beauty of Leyte.

The last time Marco was linked to female celebrity was with his former loveteam partner, Kisses Delavin. It was in October 2017 when Marco and Kisses officially ended their on-screen and off-screen partnership for unverified reasons. Recently, fans have been shipping Kisses with La Luna Sangre star, Tony Labrusca.