Thespian Joel Trinidad: "It's Easier To Create Art When You're Sad"

The handsome lead star of Breakups And Breakdowns talks about how his real love experiences helped him create his new play.
by Jing Lejano | Feb 10, 2011
Post a Comment
Featured 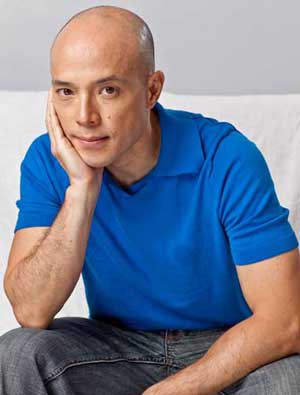 Not everyone is enthusiastic about Valentine's Day. While coupled-up chicks are busy making V-Day plans with their guy, or while happily-single gals are excited about a hot girls' night out, some of us are actually nursing a broken heart, fresh from a major breakup. Right before V-Day. Oh, burn!

If you're one of those gals, why not watch or read something you could relate to, something that tells your story? It helps in a way that you know you're not alone, that other people out there have also gone through the same stuff. You may want to check out the play Breakups And Breakdowns, for example, that tells the story of Mark, a playwright trying to get over a girl he broke up with a long time ago.

Cosmo was lucky enough to have an exclusive one-on-one with Joel Trinidad, the actor who plays Mark and who also happens to be the play's writer and director. The 20-year stage veteran candidly admits to Cosmo how his real--albeit heartbreaking--life experiences brought the story, songs, and characters of Breakups And Breakdowns to life. Pick up a lesson or two about love and heartbreak from this multi-talented and undoubtedly charming thespian, as you read through our interview. Check out our gallery of his photos with the rest of the cast.

Cosmo: What inspired you to write Breakups And Breakdowns?

Joel: Even when I was younger, I have always wanted to write a musical--even though I didn't know anything about music and I only knew how to write lyrics. The first song that I wrote, that wasn't even [meant to be] part of a musical. It was just a song.

In 2002, I had a serious breakup. And you know how it's easier to create art when you're sad? It wasn't a bad breakup but it was [still] a breakup--it hurts, right? I went home, January 1, 2002. I wrote the song, "Tired Of Goodbye." And that song, I wrote it in the span of two hours siguro. That's the fastest [it took for me to write] any song. I printed it out, I have the page here, the exact page that I typed the song on, I still have that. And that song was still virtually unchanged from that day, [with] just a little bit that the composer added. So, it was a breakup song.

So, from there, I thought, Maybe I should write about something. Not necessarily because of that song, but, you know, [as a writer,] when [you] write something, you write what you know.

I didn't know how it was gonna end, I just knew that, if you know anything about musical theater writing, the songs appear in emotional high points, which is the reason for the singing. Like, their emotions can't be contained in mere words, that's why they sing. So if you read any script, [you'd say,] "Okay, this is a high point, I'll put a song here." Then, I went to look for someone to write music, the actual music. That is a very, very long answer. (Laughs.)

C: Can you tell us about the play? What is it about?

J: The best way to describe it is, it's about two separate couples, but [they're] sort of interrelated. The first couple was together for about two years, and when the play starts, they have already been broken up for 18 months. But they have feelings [for each other, and] they're trying to get over each other.

The second couple is the opposite. They just met, and they're sort of feeling each other out, playing a lot of games. Like I'll call and pretend to cancel this date. And they sound like the more humorous couple, because of the situation they get in. That's it, that's what's the story is about.

It's about the things that people do to get over someone or to get with someone. It's very, very light. There's no angst in it, it's not heavy at all. I don't write angst because I don't have angst. So, I just write what I wanna see, I like really light romantic comedies, like, for example, They're Playing Our Song. You're happy the whole time [watching it].

C: Can you describe Mark, the character that you play?

J: I play Mark, he's a playwright and he's a perfectionist--and I'm describing myself--very fastidious, a little bit geeky, doesn't like to go out. That's my character. He propels the story, because he's writing a play about relationships.

C: How are you similar to or different from the characters in the play?

J: That's an interesting question because, as they say, write what you know. All four characters are basically aspects of me. It sounds very, very egomaniacal, but that's true. You have two male characters in the show, and one is a graphic designer. I'm not a graphic designer but I worked in advertising for almost nine years, same field.

I'm basically a split between Mark and Derek. Mark is a perfectionist and very disciplined, but I have something in common with Derek because he has a very rich and varied dating history. So the whole game playing? In my day I was just very, very good at that. You know the whole, "Okay, I'm gonna call now," and then I'll wait a bit [before I call again] and I'll say this, and this. So, I'm more like Mark, but there are aspects of Derek in me.

C: What lessons have you learned from writing the musical?

J: When I started this musical eight or nine years ago, I was a totally different person. When I started the musical, the ending of the story was a conceptual ending, just a nice way to end the show. Now, I'm looking at it from the wisdom of having lived through a lot of it. And, it means more.

I'm not giving away any big ending, it's just, at the end of it, Mark realizes that you can't keep going for perfection, because you're never gonna be happy. And that was a way to end the story, and now I've actually learned that. And the thing about dating all these women and being a playboy, at the end you gotta choose one. Now, I'm a newlywed, so my whole life has changed since I wrote it.

Another thing I learned is that, if anything in the world hurts you, write a song. The pain that I went through in the last few years, like bad breakups, girlfriend cheating on me, stuff like that, really bad. When I [started writing] the musical, that stuff [had not yet] happened to me. I have never been cheated on. But [eventually] it happened and I infused it [into] my writing, it became more real. I was depressed, it made me sad. But, it made my writing so much better. So there was an advantage. So I'm like, "Okay, hurt me!"

C: Could you give us three pieces of relationship advice that we could learn from Breakups And Breakdowns?

J: Number one, the games that you play are fun, but ultimately you have to drop them after a while. If you wanna be happy you have to drop them at some point. Number two, decide what makes you happy and do it. And number three, when you're getting relationship advice from an artist, you're screwed. I'm, like, no one's idea of a life coach. A friend of mine once told me, "I wanna ask you for relationship advice." And I'm like, "Why do you want to ask me for relationship advice?" And then she goes, "'Cause you've had so many!" E parang mali yata 'yun 'di ba? 'Cause if I knew anything about relationships, then I would've only had a few.


Catch "Breakups And Breakdowns" at Teatrino at The Promenade, Greenhills, every Friday and Saturday from February 18 until March 12. Check out Upstart Productions' website for schedules and ticket info.