The former Cosmo Centerfold and Online Hunk was named one of the country's 100 Most Beautiful. We caught up with him to get his thoughts on beauty.
by Dawn Niekamp | Aug 12, 2011
Post a Comment 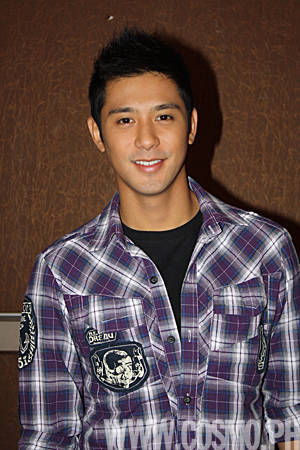 Rocco Nacino proved to be one of your favorite hunks last year: when we saw how much you loved him when we made him Summer Cosmo Online Hunk, we knew we had to make him a Cosmo Centerfold, too. You definitely gave him screams of approval when he walked the runway at the last Bachelor Bash. Because you loved him so much, we even let you chat with him and a lucky reader go on a date with him! (FYI, though, Rocco is currently dating Sheena Halili.)

This boy has always loved performing, but before becoming the rapidly-rising star that he is, he took up Nursing at Mapua Institute of Technology and eventually passed the board exams in 2009. He joined showbiz through GMA-7 talent search Starstruck V, where he emerged Second Prince (runner-up to fellow Cosmo Online Hunk Steven Silva). He has since appeared on numerous TV shows as well as magazine covers (Rocco was Men's Health Magazine's cover guy last month!). Currently, you can catch him on Time of My Life, Party Pilipinas, and the Mistaken Identity-Lovebug series with former Cosmo cover girl Lovi Poe.

The 24-year-old has definitely arrived on the scene, which is why we're not surprised he was named by our sister publication YES! Magazine one of this year's 100 Most Beautiful Stars. He was listed under the "Breakthrough Boys" category, which includes Elmo Magalona, Enrique Gil, Martin del Rosario, and Cosmo hotties Matteo Guidicelli, Ejay Falcon, Paulo Avelino, and Joseph Marco.

We had a little chat with Rocco at the press event for YES! Magazine's 100 Most Beautiful Stars special at Crowne Plaza Hotel. Read the interview below to learn how he looks at beauty, who he deems "most beautiful," and how he feels about being on the list. Then launch the gallery to see photos of Rocco at the event.

For girls, I would say Lovi Poe (who also made it to the list) kasi morena siya at 'yung beauty niya talagang nag-stand out para sa akin, kasi most of our artists [are]white. That's why Lovi Poe stands out kasi she's morena and she can be so beautiful.

How about in your life--who's the most beautiful person?

My mom, because she inspires me, and she's the one giving me determination and discipline that I need to be like this, to be grounded all the time. That's why for me, she's like the strongest person I know.

What for you makes a person beautiful?

How do you maintain that bod'?

First, I go to the gym. Since I'm doing Party Pilipinas every week, namai-maintain naman 'yung katawan namin. And when I have time, I do gymnastics, I work out in the gym. I do Muay Thai and basically 'yun.

What's the most beautiful moment in your life so far?

It's very humbling to be part of this and now I'm reminded to have a facial. Kailangan magpa-facial ako. Kasi 'pag sinabing "beautiful" kailangan i-maintain ko. Pero kidding aside, to be part of this is an honor. Siyempre, it's YES! Magazine and to be considered one of the most beautiful stars--nakakatuwa, kasi baguhan lang ako at I'm still working my way [up], trying to put my name up there. Napapansin ako kahit papano, so masaya ako.

Launch the gallery to view photos of Rocco at the event.