How This Pinoy Dancing Queen Found Himself And His True Calling

At 26, Jan Cerezo has competed in the Gay Games 2018 (think Olympics, but established specifically so the LGBTQI+ community can showcase their talents, skills, and athleticism without their SOGIE being an issue) for the first time—and placed fourth out of 42 couples in the same-sex Latin DanceSport event together with his partner. But here’s the real clincher: He was apparently the first male dancer to perform in full drag.

Jan unexpectedly found his love for ballroom dancing in college at Ateneo when he took up DanceSport for PE as a last resort thing. “Actually, in this exact room,” shares Jan; referring to the Dance Area where we were having our photoshoot. “And si Nix (our makeup artist for the shoot) ‘yong partner ko! OMG, ‘di ba small world?”

“We get to choose our PE naman, pero I think I was last batch so wala ng choices masyado. Yung mga ibang choices were Muay Thai, eh hindi ako athletic at all prior to DanceSport. Tapos in my head, [I thought] DanceSport was like another word for aerobics,” Jan laughs. “Wala akong ibang fitness activity na ginagawa talaga noon, not even dancing. So it was a total shock for me to discover that I kind of like dancing. It was a life-changing experience, actually.”

When he was starting out, Jan would dance the male parts. He admits that back then, he was still not quite secure about himself and his gender identity: “I was sure that I was gay, pero I was a bit insecure with being very feminine. So I wanted to try to see how I would be if I [were] more masculine. And I think the dancing was one way for me to work on that aspect of myself.”

Jan’s decision to train ballroom dancing as a man was partly due to the Ateneo Dance Sport Club’s need for more boys and partly due to prejudice within the gay community as well. “Kasi in the gay community, you're more mabenta if you're paminta—if you're more masculine and not very feminine,” he says. “[On some level], I wanted to try to dance as a boy because I wanted to overcome that challenge of me being very effeminate. I wanted to be able to dance as a boy talaga—number one, to prove that I can.” 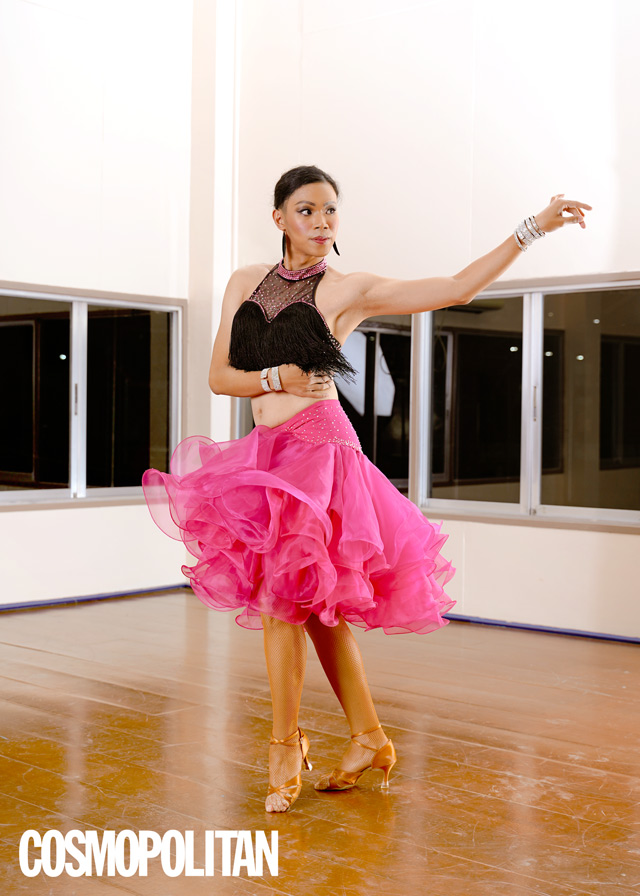 After five years of dancing as a boy however, Jan finally made up his mind. “As I got older, I got more mature and more confident with who I am, so sabi ko, ‘Eff this! To hell with this, I’ll do what I want.’ And when I told my coaches [that I wanted to start dancing as a woman], they actually said that's something that they would discourage me from doing.”

“Take note, this was at a time when I still wasn’t 100 percent sure of myself,” Jan continues. “It was just me starting to accept myself. So you could see how it was a challenge for me to [voice that out at the time] and really do what I’m doing now.”

Looking back, he says that a pivotal moment for him realizing that he actually preferred dancing in drag was when the then-president of the Ateneo Dance Sport Club would sit in on their PE classes and help their coach out. “She would dance siyempre, tapos the way she danced really inspired me and sabi ko, ‘Oh my god, gusto ko maging ganyan!’ Take note ah, yung babae yung gusto kong maging.” 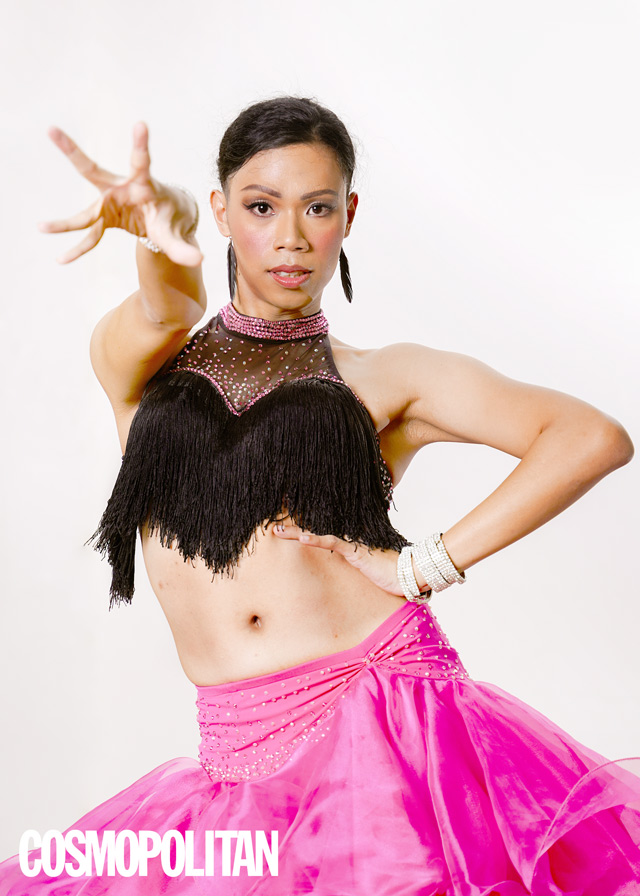 Working on the music video for Up Dharma Down’s song Indak also helped convince Jan that dancing as a man might not be for him. He had choreographed the whole thing and when he volunteered to dance as one of lead singer Armi Millare’s partners, the director said that he preferred someone more manly. “[To be honest,] na-heartbroken ako ‘non, pero sabi ko, ‘Sige, okay lang, I’ll just teach.’ I mean, I was happy with my choreo and that was what they originally got me for, so we just found another person [to dance in the video].”

Fast forward to 2015 and it’s Jan’s first gay ballroom dancing competition. It also marks the first time he wore a dress. EVER. “It was so scary. I was so uncomfortable and I wasn’t very sure of myself when I first put on the dress. Kasi yung outfits ko naman before were for men, so it’s [a very different feeling] wearing a skirt. It’s so breezy pala!” he shares. “But I was so lucky na may mga friends ako who wanted to do my makeup and I even borrowed a wig. So na-achieve ko naman na mukha akong girl and nagustuhan ko siya. At the end of that night, I felt like, ‘OMG, five years na akong sumasayaw pero eto lang yung first time na na-feel ko talagang sumayaw!’ So I wanted to continue doing that.”

“We won fifth [place] that night, tapos yung mga kalaban namin mga beterano na so I was very inspired,” relates Jan. “Kaso lang, the sad part is [the realization that] same-sex ballroom dancing competitions here are not taken seriously. They’re more for entertainment factor so if you’re funny, usually 'yun yung nananalo,” he explains. “I think in the beginning, they were trying to be [serious and technical with the judging criteria] pero not everybody kasi can achieve the feminine illusion so gay dancers still look like a boy. So even if hindi sila nagpapatawa, I think medyo natatawa yung mga tao and the dancers just decided to capitalize on that,” he adds.

After joining his third local competition, Jan sought out other avenues where he can hone his skill and show off his talent. “I was a bit frustrated with how the competitions are here. That’s why I wanted to see if there are other competitions that we could participate in abroad. And during my research, I was able to discover the Gay Games,” he says. “I think I was very much drawn to participating in it because it was a competition that was really celebrating the LGBT community—being part of the LGBT community and including everybody who wants to participate in any sport or to dance without being [discriminated against.]” 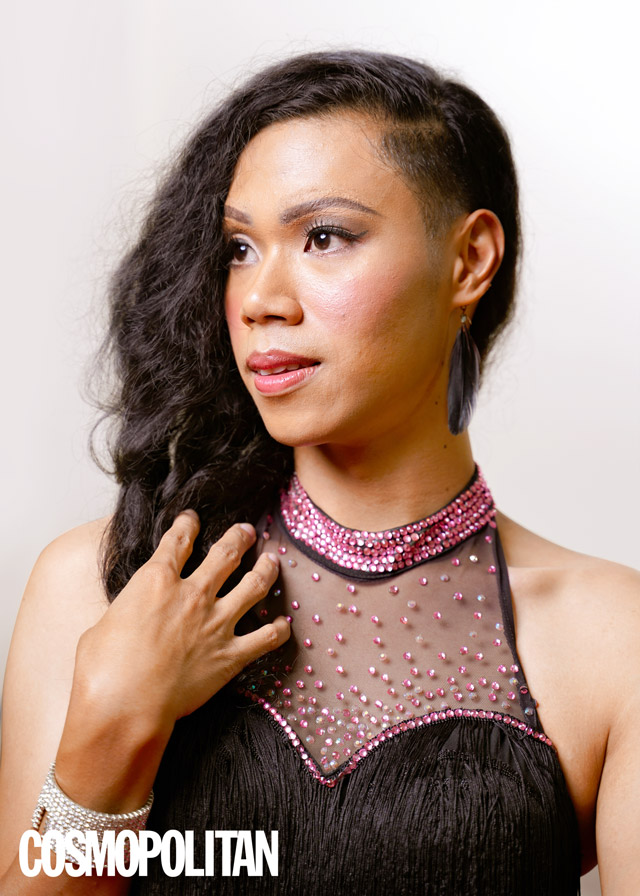 However, he had to face yet another hurdle before he got to compete in Paris for the Gay Games 2018. “There was actually an issue in the beginning because I noticed how they did it in Europe: They don't dress in drag,” shares Jan.

“For the male-to-male events, they’re both wearing men’s clothes. I was concerned because of course, this is still a competition and we could be disqualified just because they find what I’m wearing offensive. Kasi ang nakalagay lang sa rules, as long as it’s decent and it does not offend anybody, you can wear it. It's really vague,” Jan continues.

“There was actually an issue in the beginning because I noticed how they did it in Europe: They don't dress in drag,” shares Jan.

So he got in touch with one of the organizers to notify them of his costume and performance persona and at first, he was told that they discourage him from performing in drag. According to Jan, the organizer suggested he do so in the showdance competition (one of the minor events in the Gay Games) instead.

“I got a bit annoyed,” tells Jan. “I said, ‘How come in the female-to-female events, one girl is wearing the skirt and then the other girl is wearing men’s outfit?’ The reply I got was, ‘Well, those outfits are tailor-made for DanceSport.’ Needless to say, it was a very confusing reply.”

“I think even the other competitors were surprised to see [me performing in drag at such a big stage like the Gay Games]. But everybody acknowledged it and took it positively, so I think it's something that they might be doing also in the future,” tells Jan.

They finally allowed Jan to perform in full drag at the main Latin DanceSport competition after he adamantly pointed out that his outfit was also made by a local DanceSport seamstress and sent in photos and videos of him dancing in a dress.

That in itself was a mini-victory, but when Jan and his partner was placed in the Grade A event (the highest category in terms of difficulty in DanceSport) and eventually ranked fourth over-all, well that’s a triumph that no one can deny.

“I think even the other competitors were surprised to see [me performing in drag at such a big stage like the Gay Games]. But everybody acknowledged it and took it positively, so I think it's something that they might be doing also in the future,” tells Jan.

Despite the challenges he will probably continue to face while trying to make a name for himself as a drag-performing ballroom dancer abroad, Jan confesses that he actually plans on moving to Europe in the future. “I see myself growing more as a same-sex ballroom DanceSport athlete in Europe because I think there will be at least one competition there every month.” 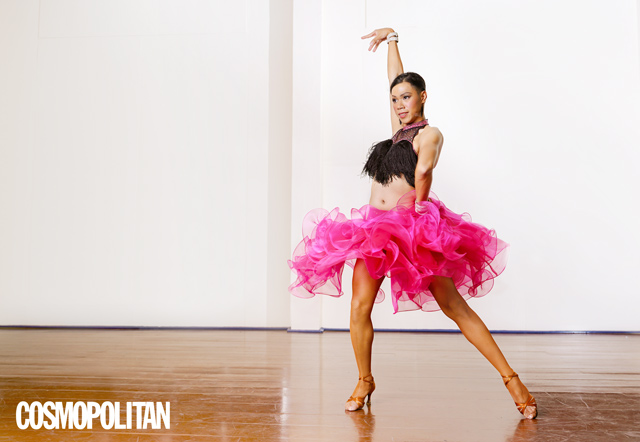 “I feel like here, it’s definitely starting to get attention, but I don’t think it will reach the level of respect that Europe has for same-sex DanceSport competitors—at least not within the next few years,” explains Jan. “Because before they can respect us as dancers, I think they need to learn to respect us as people. And that's the struggle the LGBT community in the Philippines is facing right now. I think it’s good that we’re starting to be heard and we're starting to make progress in terms of that, but the Philippines still has a long way to go.”