You 100% Need To Confront Your Fat-Shaming Friends

Franco Mabanta recently felt the Internet's wrath when he publicly announced that he is "100 percent in favor of fat shaming."

In a now-deleted Facebook post, Franco wrote, "I think the world would be a better place if all these weak minds that are captive to their bad food habits were constantly told to get off their fucking couches and stop being little bitches. Nothing motivates people to get into shape like insecurity."

Apart from this problematic rant, the post contained a picture of ESPN5 reporter and body builder Sel Guevara, who later addressed the issue in an IG story: 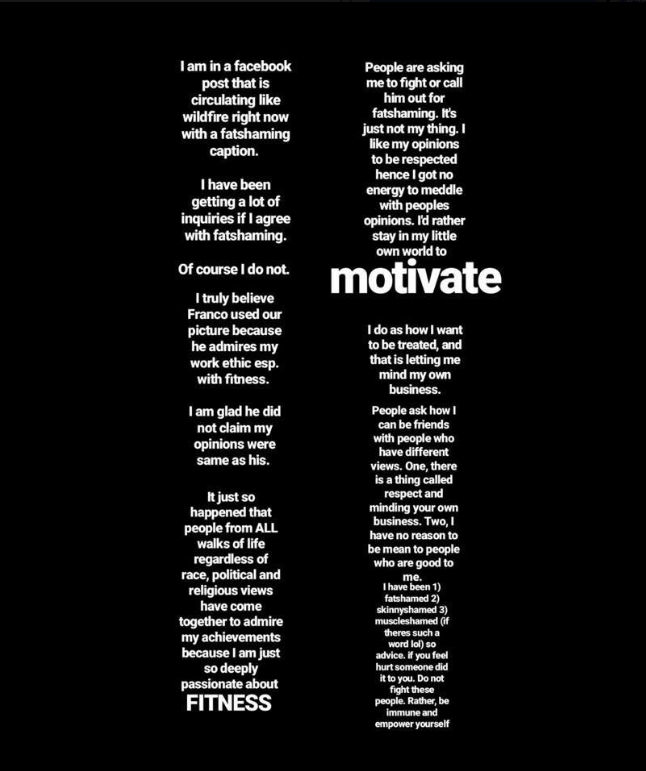 On one hand, we understand why someone as visible as Sel would prefer to be excluded from this narrative—it's the SAFE route. It allows her to disengage without taking a stance on the issue. But the choice to mind your own business is best reserved for situations that don't involve a friend calling people who aren't shaped or built like you, "little bitches."

Even if calling someone out is just not "your thing," staying quiet when so many people—people whose bodies and overall health conditions you are clueless about—are affected by fat shaming is a silent validation of this behavior.

Ignoring this issue just because you have "no reason to be mean to people who are good to you" is like saying it doesn't matter if this person is mean to other people because he's not mean to me.

But believe it or not, there is a way to confront someone—even a friend, especially a friend—without drowning them in shame or blocking them from your life. Like Sel said, it all boils down to respect. You can tell someone they're wrong or they hurt you without demonizing them. Because we can't #cancel everybody, right? What will that accomplish?

In this situation, people who are constantly fat shamed deserve more than to have someone—who's apparently experienced the same type of discrimination—tell them that the only other alternative to feeling hurt is to simply "be immune" to body-shaming comments. We all know, nothing is ever that easy. Think of how a woman who is struggling with her health feels whenever someone tells her she'd be much prettier if she lost weight?

Unfortunately, there will always be body shamers, but people who stay neutral in their "own little world" are the reason they continue to get away with it. So the next time you hear a snarky comment or backhanded compliment, speak up.