Your 5 Most Confusing Guy Texts, Decoded

Texting is hard. Texting with guys is impossible. Textperts (texting a lot qualifies you as an expert right?) Neel Shah and Skye Chatham analyzed five texts from Cosmopolitan.com readers to help them decipher what on Earth their guys are saying/typing. 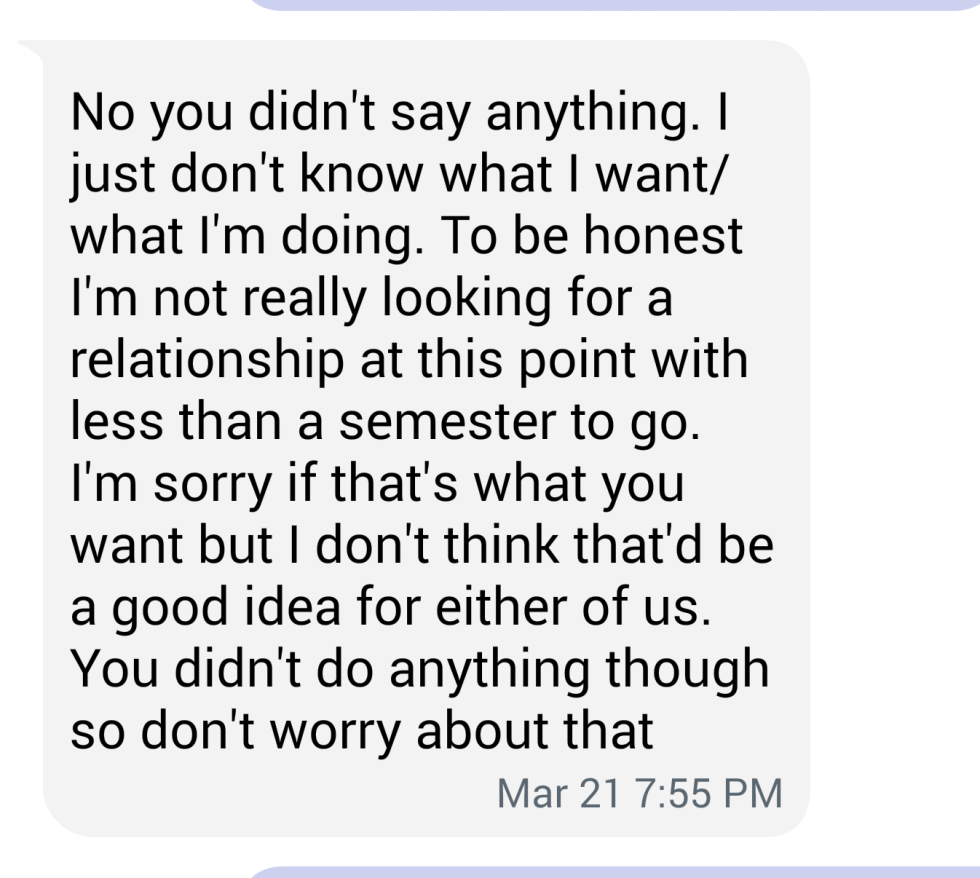 Skye: I actually believe this guy. Rather, I believe it's true even if it's by accident. From my perspective, the perspective of someone who's several years out of college, it's true that starting a relationship just before you graduate is not wise. Is there a chance this is the "how you met" story? Of course. But more likely it's not—the guy is in college and I doubt he has a sense of what's prudent. Probably he's staring down the barrel of lost senior year parties and potential hook-ups and doesn't want to limit his options.

Neel: I agree. This is just one of those things where timing is not on your side. I genuinely don't believe it's anything personal/about you—the guy just wants to hang out/live it up/whatever it is the kids are saying these days. And you should do the same! If it's meant to be, you can always circle back in the real world. (Though it's way less fun there, trust me.) 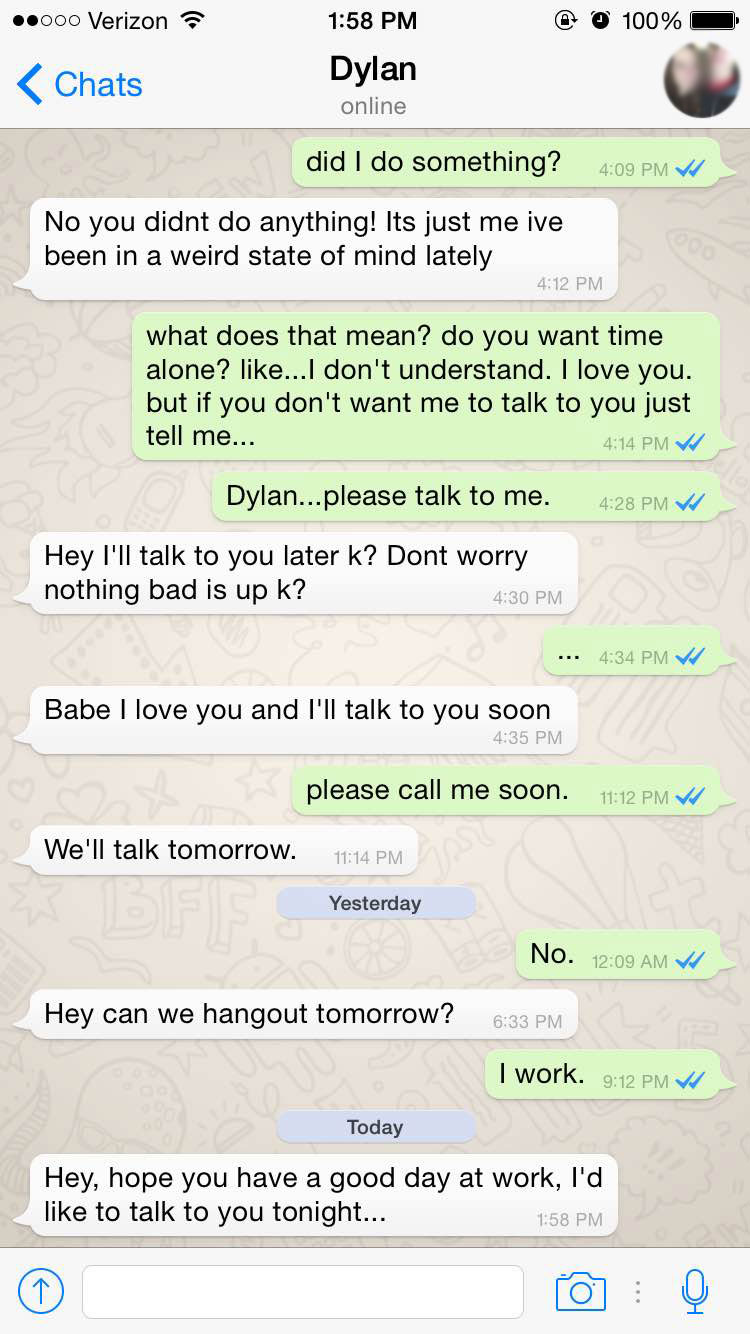 Skye: Oh man. This one is fairly cringe-inducing and she's either getting dumped or proposed to. I feel like a traitor here, but I'm going to go with dumped. These two clearly have a tumultuous relationship in which 1) it's not a given that they will see each other frequently, 2) they don't know each other's schedules, and 3) the idea of just "not talking" gets floated… and yet BOTH of them use the L word. Fascinating. By the time stamps, you can tell she's being pretty impatient, but she's freaked out. Also, if he actually is about to let her go, he is an awful person for telling her "nothing bad" is afoot.

But I was back on her side when he tells her it's "nothing bad." That's pretty awful if he is, indeed, about to let her go.

Neel: Absolutely nothing about this says "We are two parts of a healthy, functional relationship." It seems pretty clear to me that this guy is looking for a way out—which is why his using of words and phrases like "babe" and "I love you" is even more objectionable. Like he's trying to play the role of "nice guy" all the way through the break-up, when what's needed is him just owning up and having a direct conversation. If he is breaking up with her, it's probably for the best for both parties—this thing is past its expiration date. 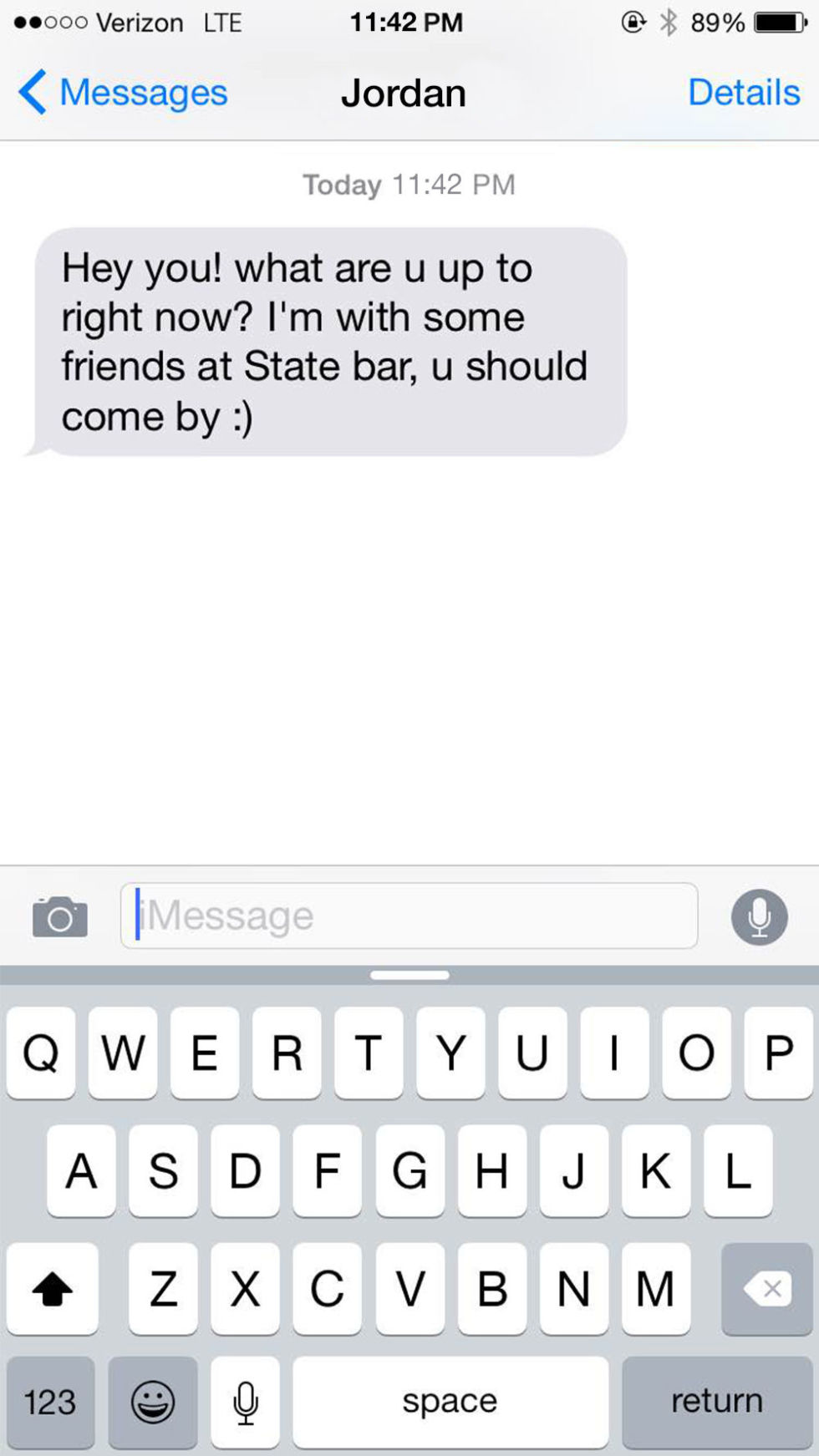 Skye: He is so very close to being charming about what is obviously a booty call, but he's missing the mark. The time stamp speaks louder than the words so the words have to be better. Maybe if he had written "What are you up to right this second?" and thus acknowledged the spontaneity and motivation behind it and made a joke out of it...or maybe if he had taken the painfully long half second to type out "you." But he didn't do those things and if I were the recipient, I'm not sure I'd even reply unless I was A) really down the street and B) equally as inebriated.

Neel: I'm mostly just wondering how many other people he sent this exact same text to. It's almost perfectly impersonally. Well done, anonymous booty-caller! You'd have way better luck if you sent that before 11:42 p.m., though.

Neel: Classic evasive maneuvers from our pal Matt here. This whole back-'n'-forth screams "I'm sort of engaged because this could be a good back-up but mostly I just want to see if something better comes up tonight." Jess, you seem lovely, and are actually trying. I'd suggest focusing your efforts elsewhere.

Skye: I did appreciate how he tried to salvage it at the end with the "What u doing now?" At little too little too late. 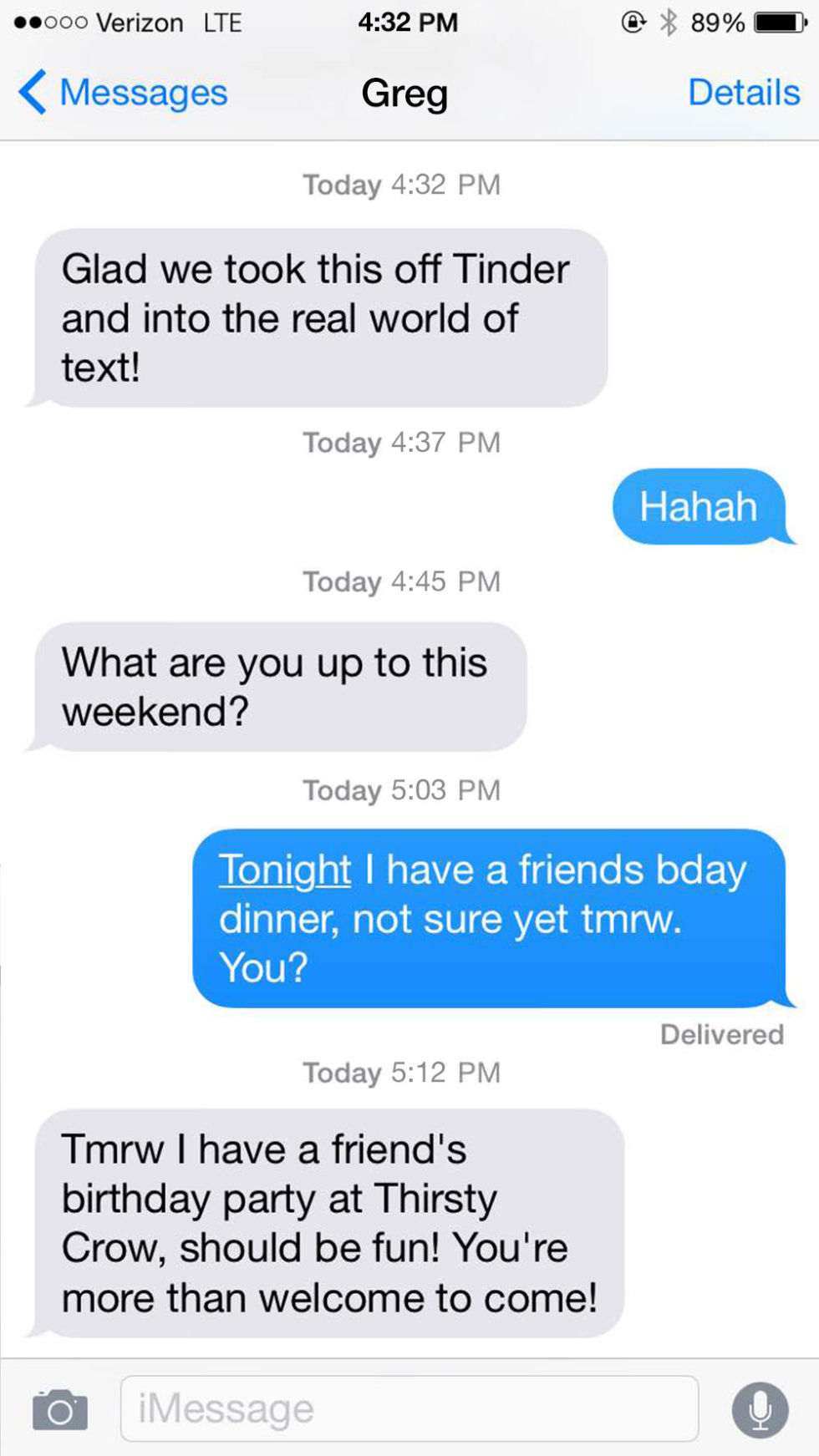 Neel: Greg, Greg, Greg. Let's start with the good: You did indeed make the move from Tinder to text without being creepy/sending a dick pic, which is a legitimately notable accomplishment in 2015. Here's the bad: You then suggested a group date as your FIRST DATE. Come on, dude! Meeting one stranger from the internet is stressful enough—don't complicate things by throwing a whole bunch of other strangers into the mix. First dates should be one-on-one.

Skye: I'm still just in awe that he didn't send a picture of his penis. MARRY HIM.