Check Out Other Guys, Don't Text, Love Your Ex--NEW Love Rules That Work! 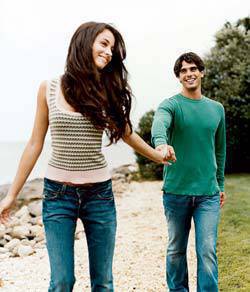 It’s anyone’s guess where they originally came from, but there are some universally accepted relationship mandates that we all think we should abide by. A few of these couple commandments are actually valid (as in: your best friend’s boyfriend is off-limits); others are totally bogus and your relationship will be better off if you break them.

“Instead of blindly adhering to a pre-fab and possibly outdated standard, it’s smart to consider how couples really function in today’s world and act accordingly,” says Los Angeles psychotherapist Lynn Ianni, PhD. The trick is figuring out which love laws help bolster your connection…and which ones should be banned. Not quite sure? Don’t worry. Cosmo has compiled five dating doctrines that you need to ditch this instant!

Rule 1: You can’t check out anyone else.

Why you should break it: You’re in a relationship; you’re not dead. So when you’re walking down the street and a delicious hunk of man-meat catches your eye, go ahead and give yourself permission to do a double take. Noticing the scenery isn’t a sign that your guy doesn’t do it for you anymore. “It’s human nature to be attracted to other people,” explains Ianni.

That’s not to say that it’s cool to blatantly ogle every XY chromosome owner that crosses your path, even when your boyfriend isn’t by your side. “It’s important to respect your significant other, so you don’t want to be too obvious or make a habit of looking,” says Marcella Bakur Weiner, PhD, coauthor of The Love Compatibility Test. Obviously, there’s a difference between staring slack-jawed and simply appreciating a nice view.

On the flip side, however, you have to understand that your guy isn’t blind either. If you see that he notices some chick, as long as he’s not outright drooling over her, don’t make a big deal out of it. You can even score points with him by joining in and saying something like “Oh, she’s cute,” advises professional counselor Roger Rhoades of Carolina Counseling in Greenville, South Carolina. “Acknowledging that another woman is attractive makes you seem confident, which only adds to your own appeal.”

Or do what Stella, 29, does with her guy. “My boyfriend and I like to play this game we call Hot or Not, where we people-watch and rate all the passersby,” she says. “It’s a fun way for both of us to ogle hotties without pissing the other person off. Plus, it gives us interesting insight into each other’s taste.”[nextpage]

Rule 2: You have to give each other the play-by-play of your day.

Why you should break it: You already know it’s not cool to attach yourself to his hip. Well, the same thing goes for drawing him a mental map of your daily grind. A cheat-sheet version of your day is actually more effective. “Then move on to more mutually interesting topics, like current events or a movie you want to see,” says Rhoades.

So when you two hook up after work, how do you know if you’re giving TMI (too much information)? Follow this rule of thumb: “Fill your guy in on the things that elicited an emotional response from you,” says Ianni. For instance, if someone got fired and you’re afraid you’ll be next or if you’re psyched because you learned your sister’s pregnant, go ahead and share. “Then, skim over the stuff that didn’t have a profound effect.”

Also, keep in mind what you know he finds interesting…and what will make his eyes glaze over. If hearing about office gossip is about as torturous to him as getting a root canal, spare him the dirty details. He’ll be more into communicating with you if you’re both on the same page.[nextpage]

Rule 3: Sex always has to be spontaneous

Why you should break it: The constant carnal craving that most twosomes experience early in a relationship sparks lots of anytime, anywhere sex. Unfortunately, it doesn’t last. Eventually, daily pressures can put a damper on your desire. “Many people erroneously believe that to be happy as a couple, you need to be having frequent, spontaneous sex,” says Ianni. “But you have to work at maintaining an exciting sex life.”

So if your calendar is as stuffed as Paloma’s bikini top, schedule time to get it on. Rather than making dinner reservations, book a booty session instead. It might not sound that romantic, but penciling in sack sessions has its benefits. “Planning a rendezvous creates anticipation, which can up your arousal,” explains Ian Kerner, PhD, author of Be Honest—You’re Not That Into Him Either. “Thinking about having sex before you actually do it is mental foreplay.”

That’s what Kara, 29, discovered after she got a big promotion. “I was working my butt off and was too exhausted for sex,” she recalls. “However, my boyfriend was starting to bitch about how boring I was becoming. So we made a date to ‘hang out’ at home. I found myself fantasizing about the hot things we would do that night.”[nextpage]

Rule 4: You have to resolve every conflict.

Why you should break it: Forget the old adage that you should never go to bed angry. Despite your feminine urge to fix a problem now, it often pays to sleep on it…or drop the matter completely. “Women are oriented toward harmony and balance in relationships, so they often try too hard to analyze and repair an argument, which isn’t always possible…and can even exacerbate the issue,” says Ianni.

What is important when you don’t see eye-to-eye is being able to communicate your feelings. “If you bottle up your emotions, you set yourself up for a far worse explosion later,” says Ianni. But speaking your mind doesn’t necessarily mean finding a tidy resolution.

Take it from Erika, 28, who was sick of battling with her fiance about her future monster-in-law. “Greg’s mother is a pain in the ass,” she says. “I can’t stand her, and I would take my anger out on him. But I realized that I wasn’t being fair. She’s his mother. What can he do? So now I complain to him when she upsets me, but I don’t blame him for her behavior. I guess it’s something I’m going to have to learn to live with.”

As Erika found out, there are some disagreements that can’t-or shouldn’t-be fought to the finish. “Let smaller conflicts go, and focus on working out the ones that involve your core values and life goals,” says Rhoades. For example: If your guy’s leave-the-dishes-in-the-sink habit bugs you, suck it up. He is probably an inherent slob and isn’t likely to change. However, if he keeps blowing his paycheck on unnecessary big-ticket items while you want to save up to buy a house together, that’s a point of contention you should hash out.[nextpage]

Rule 5: You need to deep-six your exes.

Why you should break it: There’s no reason to cut off contact with someone you genuinely care about. Just because it didn’t work out romantically between the two of you doesn’t mean you have to wind up hating each other. “You date someone who has qualities that you appreciate and enjoy,” says Pepper Schwartz, PhD, author of Everything You Know About Love and Sex Is Wrong. “Even if you didn’t succeed as a couple, you might still like each other as friends.”

However, there are certain codes of behavior that you need to respect. First, keep the camaraderie casual. “Make a conscious effort to refrain from doing anything that would make your current boyfriend feel threatened or jealous,” says Rhoades. In other words, it’s okay to meet your ex for a quick cup of coffee; it’s not okay to get together for an hours-long romantic dinner.

Secondly, make sure it’s clear to your new man that you no longer have any romantic feelings for your ex. One way to do that: Have a threesome…in the platonic sense. Instead of getting together with your old beau solo, invite your boyfriend along once in a while. “The fact that you’re including him shows that you and your ex really are just friends and have nothing to hide,” says Rhoades. They might even like each other. But even if they don’t become buds, at least you will have averted any potential problems.

Just remember, keeping ties with old lovers works both ways. If you want to maintain relationships with your exes, you have to be understanding if your current guy wants to do the same.